How A Bacterial Protein Outwits Arsenate 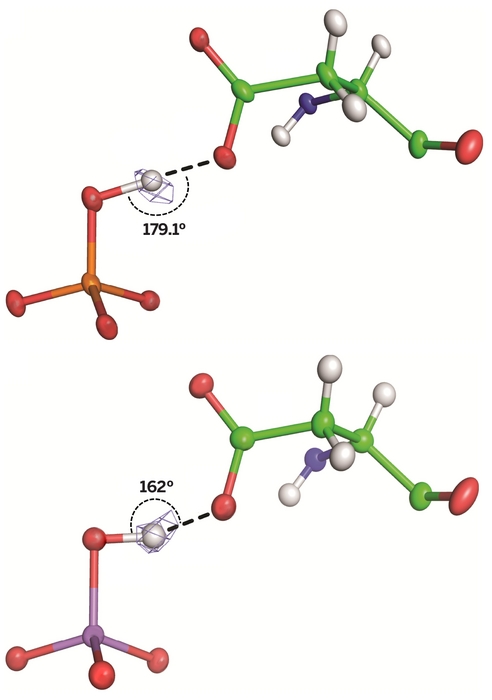 With a detailed structure, researchers have discovered that a distorted hydrogen bond shapes how a bacterial protein distinguishes essential phosphate from toxic arsenate (Nature, DOI: 10.1038/nature11517). The work represents another nail in the coffin for the controversial claim that a microbe called GFAJ-1 could incorporate arsenate in its metabolites.

Phosphate-binding proteins and enzymes studied so far have shown little preference for phosphate over arsenate. Wondering how life evolved to deal with arsenate-rich environments, Weizmann Institute of Science postdoc Mikael Elias, Dan S. Tawfik, and colleagues turned to periplasmic phosphate-binding proteins. “These are gatekeepers,” Tawfik says, regulating passage through microbes’ inner membrane. They now find that versions of this protein from several bacteria, including GFAJ-1, are highly selective for phosphate.

X-ray structures of the protein, from the bacterium Pseudomonas fluorescens, reveal that when arsenate binds, a hydrogen bond to an aspartic acid residue becomes distorted. “The angle between the hydrogen and the oxygen is really freaky,” Tawfik explains. Mutating the aspartic acid makes the protein less choosy for phosphate over arsenate, reinforcing the idea that the distortion drives the protein’s phosphate selectivity. Tawfik thinks that mechanism is also at play in the analogous protein from GFAJ-1, allowing it to survive in arsenic-rich environments by discriminating against arsenate.

“It wouldn’t surprise me if there are other key adaptations” in GFAJ-1, including boosts to enzymes that reduce arsenate or pump it out of cells, says biochemist Gerald F. Joyce of Scripps Research Institute. “Now can we all stop talking about ‘arsenic-based life’?”