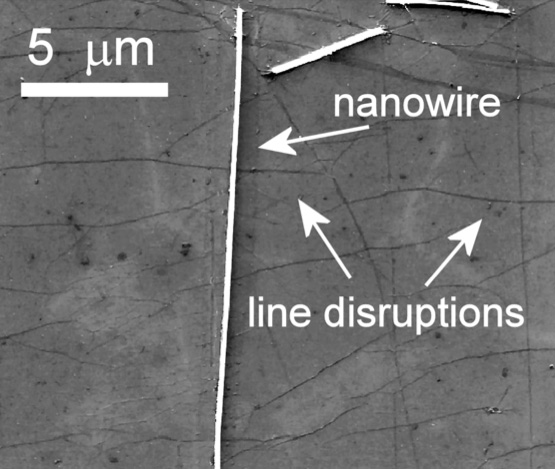 Credit: Nano Lett.
On a graphene film, silver nanowires lie across several defects (line disruptions) that would otherwise scatter electrons and positively charged holes. By giving charge carriers a way to cross the defects, the nanowires increase the conductivity of graphene sheets.

One-atom-thick graphene, with its high electronic conductivity, is a promising material for making the transparent electrodes needed in solar cells and displays. However, when researchers grow large sheets of graphene, defects in the material reduce its conductivity. By integrating metal nanowires into conventionally grown graphene films, researchers have now dramatically increased the films’ conductivity (Nano Lett., DOI: 10.1021/nl302870x).

Transparent electrodes in today’s devices are made of indium tin oxide (ITO) films. These films are typically 90% transparent and have a resistance of less than 100 ohms. But they are expensive and brittle. Graphene could be a lower-cost alternative. It is also intrinsically stronger and more flexible than ITO, so it could find use in bendable electronics.

However, the resistance of graphene sheets large enough to make the electrodes--which are grown using chemical vapor deposition--is usually more than 500 ohms. Such sheets are made of many small crystals. The conductivity is low because the boundaries between the crystals scatter the electrons and positively charged holes that flow through the material. Ripples, folds, and tears in the sheets also scatter charge carriers.

Researchers can reduce graphene’s resistance by doping it with nitric acid and fluoropolymers. But this chemical doping effect either fails to improve graphene’s conductivity to ITO levels or is temporary. Last year, Muhammad Alam and his colleagues at Purdue Universitypredicted that integrating metal nanowires into graphene sheets could drastically reduce their resistance (Nano Lett., DOI: 10.1021/nl203041n). The nanowires would bridge defects and crystal boundaries, giving the charge carriers a shortcut, Alam says.

Rodney S. Ruoff and his colleagues at the University of Texas, Austin, have now demonstrated that the idea works. They first grew nanowire-free graphene on copper foils using chemical vapor deposition, which Ruoff says is the best-known technique to grow large, centimeters-wide graphene films. Scanning electron microscope images showed wrinkles, ripples, and folds in the sheet, which had a resistance of over 1,000 ohms.

Next, the team made films of varying amounts of silver nanowires, each of which were 5 to 25 µm long. The researchers transferred the graphene films onto the nanowire films. They found that a higher number of nanowires decreased the resistance but also lowered the transparency of the hybrid films. Still, the film with the lowest resistance, of 64 ohms, was more transparent than ITO at about 94%. Layering two such graphene-nanowire films together gave an even better film, with 24 ohms of resistance and 91% transparency.

The researchers tested the 64-ohm films in an electrochromic device, which lightens or darkens depending on the voltage across it. They replaced one of the device’s two ITO electrodes with the graphene-nanowire film. “The device works equally well whether we use ITO or this composite film,” Ruoff says. Replacing one electrode gave a color change that was as quick and as complete as it was in the original device.

Purdue’s Alam is excited to see others test the hybrid graphene/nanowire film. He believes the method is better than chemical doping for making high-conductivity graphene sheets. He adds that, in unpublished work, his group has made similar films that show 13 ohms resistance.