ACS Meeting News: Courses aim to engage students who don’t know the difference between a beaker and a Bunsen burner 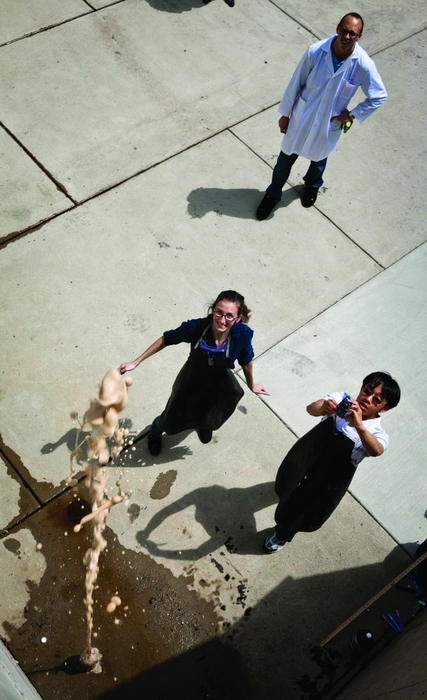 Credit: Donna Connor
Students at the Richard Stockton College of New Jersey study a Mentos and Diet Coke geyser as part of a capstone project.

At their worst, chemistry courses for nonscience majors are a drag for everyone. The students are there only to get a university-mandated laboratory credit, and the professor is there because someone has to teach the class. But at their best, these so-called nonmajor courses show nonscientists why chemistry is important and let teachers see how outsiders perceive their science. Then the courses give instructors the opportunity to change that perception.

At the American Chemical Society national meeting in New Orleans last month, several educators spoke about their work on such classes. Central to a number of them were innovative laboratory experiments that let students get a taste of the scientific process and how chemists do what they do.

“This approach can really excite students,” said Marc L. Richard, a chemistry professor at Richard Stockton College of New Jersey, in Galloway. “You demonstrate how science is done by actually doing it, rather than talking about it or just giving students a demonstration.”

During their college careers and beyond, these students will probably take only one or two science classes, Richard noted, so it’s important that their experience with science be a positive one that gives them the skills to think about science as they encounter it in the world.

“These students are the people who are going to end up as our lawyers, our businesspeople, and our legislators,” said David A. Katz, a chemistry professor at Pima Community College, in Tucson, who organized the symposium. “They don’t need a watered-down chemistry course. They need a course that’s going to look at how science affects their daily lives.”

To that end, Katz has been teaching “Consumer Chemistry” at Pima since 2004. The class meets only in the laboratory, where Katz gives students a brief lecture before launching into an experiment that explores the chemistry they encounter as consumers. “I don’t load them down with the basics and take them forward,” he said. “Rather, I introduce the chemistry more in context.”

For example, in one laboratory experiment, the students learn about fats and oils by experimenting with potato chips. They crush the chips and then rinse them with an organic solvent to pull off any oil. They then dry the leftover food and weigh it, ultimately seeing that the weight lost matches up with how much fat the nutritional information says the chips contain.

Stockton’s “Experiential Chemistry” class also takes place entirely in the laboratory. The course was originally developed by now-retired professor Jonathan Griffiths, and Richard took over teaching it six years ago. “The laboratory experiences are designed to give students initial instructions on how to get started, suggesting measurements or procedures they should follow, but then are open-ended so the students can explore,” Richard explained.

At first, students are simply encouraged to wonder about things. They’re taught to make observations and ask questions, even if they don’t get any answers. That’s because in science the answers aren’t always there. 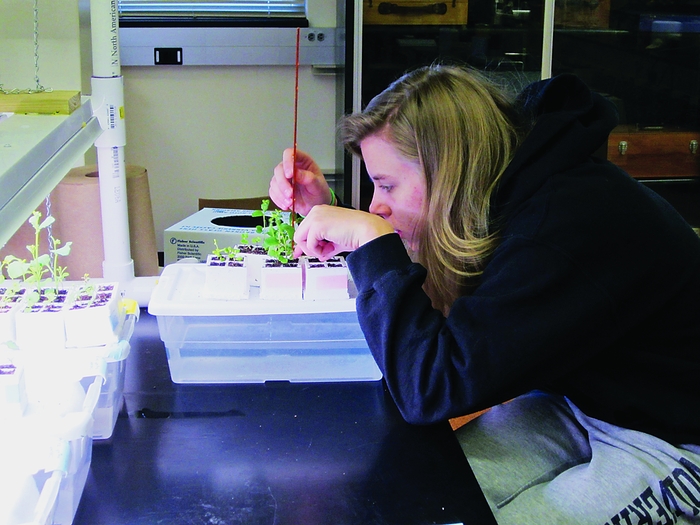 For example, in one laboratory experience students are given a sealed cardboard box containing an object. Their goal is to figure out what the object is. “All the boxes are numbered, but the key that says what’s in each box was lost 20 years ago,” Richard said. “I have no idea what’s in the boxes, and I don’t want to know.” It’s a way of driving home to students that scientists often have to extrapolate information from something they can’t probe directly. “I really want them to understand how we practice chemistry and the research process—the idea of making a model, asking questions, and figuring out how to answer them if you’re doing an experiment,” he explained.

Richard noted that the labs where students get to take home something they’ve made, such as photochromic plastic or bismuth crystals, are among the most popular. They also serve as a recruiting tool, he added. Other students see what their peers have brought home and get curious about the class.

The course ends with a capstone project, which students design and carry out. “A group of students always wants to work on the Mentos and Diet Coke geyser,” Richard said. They explore the explosive combination by trying different sodas, different candies, and various modifications to the Mentos. “Based on feedback, it’s pretty clear that after the course students feel they have a better perception of chemistry,” Richard said.

“Chemistry departments don’t always have opportunities for nonmajors,” noted Jennifer E. Mihalick, a chemistry professor at the University of Wisconsin, Oshkosh. “I remember in college hearing about ‘Physics for Poets’ and ‘Rocks for Jocks,’ but the chemistry department has such a big service load, that I think it’s less common for us to offer a liberal-arts-focused course.”

In 2003, Mihalick began teaching “Introduction to the Chemistry of Materials,” a course for nonmajors that she teaches with the costume designer from the university’s theater department. The class explores the chemistry behind materials that society depends on, such as fabrics, metals, polymers, ceramics, and semiconductors.

Mihalick said the labs where students make things are the most popular. In one lab they prepare concrete, and in another they make colored glass using a room-temperature process.

Mihalick enjoys the freedom the class gives her as an educator. “I don’t have to cover anything in particular,” she said. “I can choose interesting topics right out of the newspaper.” For example, when she first taught the course in 2003, classes started just two days after the space shuttle Columbia disintegrated on its reentry into Earth’s atmosphere. So Mihalick and her students followed the ensuing investigation, learning about the carbon fiber composites in the shuttle’s wings.

When asked to create a laboratory course for nonmajor honors students, Kevin Metz, a chemistry professor at Michigan’s Albion College, also wanted to address a topic in the news, and so he came up with “Great Issues in Science: Nanoscience.”

“I study nanoscience, and these were all students who want to go into policy and law,” he said. “I decided I would design a class where we talked not only about what nanoscience is from a physical science perspective but also about the challenges within nanoscience in terms of policy, as well as environmental and sustainability issues.”

For the laboratory portion of the class, Metz designed a large open-ended experiment in which the students would synthesize silver nanoparticles and then feed them to Brassica rapa, also known as the Wisconsin Fast Plant for its short lifecycle. It was up to the students to design the exposure experiments, determining how large a concentration of nanoparticles they would use.

About half of the plants died because of the way the experiments were designed, Metz said. The half that lived, however, indicated there was no significant difference in height between the plants that were exposed to silver nanoparticles and the control plants. Chemical analysis of the plants’ tops revealed silver content, suggesting the plants were pulling the nanoparticles out of the soil.

Metz said that before embarking on the experiment, his nonmajor students had this view that science was simply “a system of buttons you push to get a result. They were shocked to realize it was a long process and the results were heavily dependent on how the scientists worked and how they designed their experiments.”

But Metz says his students weren’t the only ones who took something away from this course. “I gained perspective on how nonmajor students view science,” he said. “Just teaching this one class for nonmajors has influenced how I teach my classes for majors. I find myself talking not only about the nuts and bolts of chemistry but about the broader impacts of science as a process, how we do it, and what the ramifications are.”

Education
ACS Award for Achievement in Research for the Teaching & Learning of Chemistry: Marcy H. Towns
Physical Chemistry
C&EN Talks With "The Amazing Race" Team Of Amy DeJong And Maya Warren
Start-ups
Kitchen Chemistry Classes Take Off
Share X
To send an e-mail to multiple recipients, separate e-mail addresses with a comma, semicolon, or both.
Title: Lab Lessons For Reluctant Chemists
Author: Bethany Halford
Chemical & Engineering News will not share your email address with any other person or company.