After years of neglect by pharma companies, rare disease treatment is coming into the limelight

ROUTINE
[+]Enlarge
Credit: Lisa Jarvis/C&EN
A nurse gives Jason Leider his weekly dose of the treatment Elaprase, while his brother, Justin, watches. They are two of only a few hundred boys in the U.S. with Hunter syndrome. The boys carry backpacks containing an IV bag with the drug, which takes four hours to infuse into their bloodstream. 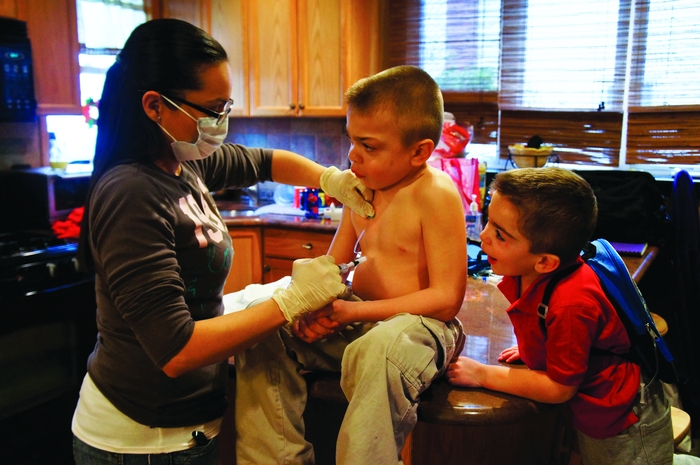 Credit: Lisa Jarvis/C&EN
A nurse gives Jason Leider his weekly dose of the treatment Elaprase, while his brother, Justin, watches. They are two of only a few hundred boys in the U.S. with Hunter syndrome. The boys carry backpacks containing an IV bag with the drug, which takes four hours to infuse into their bloodstream.

One afternoon a week, usually on a Tuesday, a nurse arrives at the Elmwood Park, N.J., home of Jeff and Deena Leider to give their sons, Justin and Jason, their “muscle juice.” On each visit, she carefully inspects a handful of vials, empties them into an intravenous bag, and calibrates a pump that will slowly dole out the bag’s contents. Justin, who at four is the younger of the boys, is the first to be hoisted onto the kitchen counter. After taking off his shirt, he sits, swinging his legs and patiently waiting for his superpowers to be activated.

The nurse, whom the boys clearly adore, gently removes a bandage on Justin’s chest, revealing a small bump that allows her to home in on his implanted IV port. After she inserts an IV line, Justin pulls his shirt back on and shrugs on a Batman backpack holding the IV bag and the pump. Fully suited up, he reaches for a reward of a sour gummy worm and hops down. Minutes later, Jason takes his place on the counter, and the nurse repeats the process with him.

For the next four hours, while Justin and Jason go about their evening routine with their matching backpacks in tow, their muscle juice—known to technical-minded grown-ups as Shire’s drug Elaprase—slowly infuses into their bloodstream. The superpowers it imparts make it easier for them to run, jump, and climb like other kids their age.

The boys have Hunter syndrome, a rare and fatal genetic disease caused by a deficiency in an enzyme that breaks down sugar molecules. The missing enzyme is just one of more than 100 housed in the lysosome, the cell’s waste bin. Today, some 50 different inherited diseases—known broadly as lysosomal storage diseases—are caused by genetic mutations that disable one of those enzymes.

In Hunter syndrome, which affects only boys, the buildup of sugar molecules over time causes symptoms such as stiff joints, enlarged spleens, and difficulty breathing. For children like Justin and Jason, who have a form of the disease that affects the brain, the accumulation also causes a rapid decline in mental function. And it’s rare—just one in 155,000 boys are born with the disease.

Elaprase replaces the missing enzyme, iduronate-2-sulfatase, buying the boys valuable time by shrinking their spleens and helping their heart and lungs function. Yet it won’t save their lives. Elaprase can’t get past the blood-brain barrier, the cellular security gate that protects our most complex organ, so it can’t stop the mental deterioration that will cause the boys to lose their ability to walk and talk. Most boys with Hunter syndrome die by age 15.

Elaprase is also breathtakingly expensive. As his sons run in circles through the kitchen and living room, Jeff Leider holds up a small glass vial filled with clear liquid. “That’s, like, $10,000 right there,” he says, eying the bottle with a mix of awe and disbelief. Having two kids with Hunter syndrome who need several vials per treatment, the Leiders’ annual bill approaches $1 million. Deena’s insurance covers the bulk of the cost, and Shire, the drug’s manufacturer, takes care of the rest through a patient assistance program.

Two-and-a-half years after Justin and Jason’s diagnosis of Hunter syndrome, the high price of treatment and its limited effectiveness have led the Leiders to start a nonprofit and to lobby Congress to make it easier for children to get diagnosed and for drugs to be developed.

That has put the Leiders in the middle of a movement that is creating new treatments for even the rarest of diseases. Because they afflict so few people, thousands of diseases have been ignored for decades. Now, a shift in big pharmaceutical companies’ business models away from multi-billion-dollar blockbuster drugs is coinciding with a deeper understanding of the genetic underpinnings of rare diseases. And government policies introduced just last year have created new incentives to serve small patient populations.

The collision of factors has made rare disease drugs one of the fastest-growing areas of drug development. Orphan drugs will account for 15.9% of all branded-drug sales by 2018, up from just 5.1% in 1998, according to the health care consultancy EvaluatePharma. In five years’ time, orphan drugs will be a $127 billion-per-year business, the firm says. 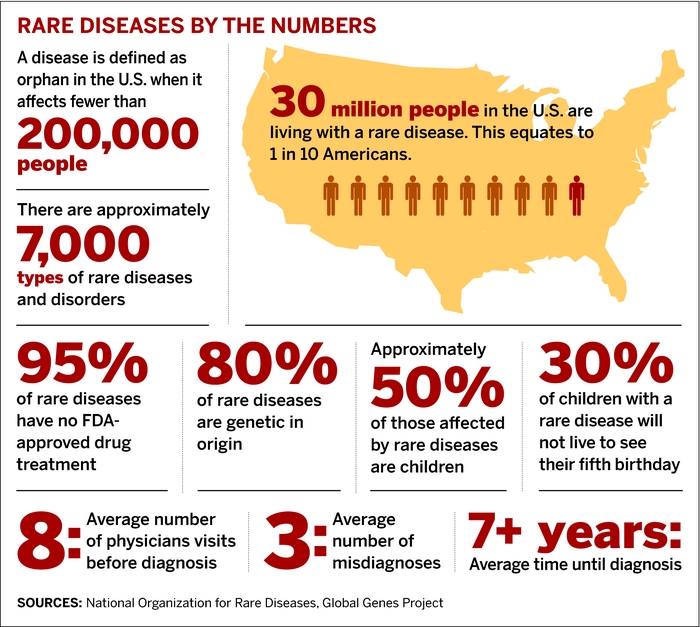 The surge in interest is made possible by the inverse relationship between patient population size and drug price. The high price for a treatment like Elaprase, which runs well into six figures, annually, per person, might raise eyebrows for those not immersed in the rare disease world. Because Hunter syndrome affects such a tiny group, Shire charges a high premium for Elaprase to offset the risk and cost of developing it.

The pricing paradigm has put rare diseases on drug companies’ radars. Even with few patients, there is money to be made. As big pharma tries to reinvent itself in an era of few blockbuster drugs, that’s an attractive proposition.

When the Orphan Drug Act was introduced 30 years ago to create incentives to develop treatments for diseases with patient populations of less than 200,000, the drug pipeline for the estimated 7,000 rare diseases was barren. Even as recently as a decade ago, the number of major companies committed to developing drugs for rare diseases could be counted on one hand.

But as Christopher P. Austin, director of the National Institutes of Health’s National Center for Advancing Translational Sciences (NCATS), declared at an event in February marking World Rare Disease Day, such illnesses are no longer in the wilderness.

NIH and the Food & Drug Administration are trying hard to foster innovation and clear the drug development path for often-overlooked patient populations. Last year, FDA was granted a new set of tools that stakeholders describe as the most important advancement in promoting rare disease development since the Orphan Drug Act.

Patient advocates are the common denominator pulling together the rare disease movement. Their role in raising awareness and encouraging drug development has been critical to piquing the interest of both academia and industry.

FATHER'S FIGHT
Jeff Leider discusses why he started a nonprofit to raise awareness of Hunter syndrome, the disease his two boys have.
Credit: Lisa Jarvis/C&EN

Sometimes, patient advocates simply try to raise awareness so that others can be diagnosed and treated earlier. According to a recent study conducted by Shire, a specialty pharmaceutical firm with a large presence in rare diseases, it takes on average 7.6 years and eight physicians for people with a rare disease to be diagnosed. Often, they get two or three misdiagnoses before someone can tell them what’s really going on.

The Leiders’ foundation, Let Them Be Little x2, puts a spotlight on Hunter syndrome, with the hopes that awareness will prompt more research and, eventually, a cure. “I had a choice to make,” Jeff Leider says. “I could go in a closet and hide from this evil world, or I could scream and yell as loud as I possibly can so that somebody will hear me.”

Others are going further by directly funding research, setting up patient registries that can be useful for clinical trial recruitment, and even starting companies. They’ve pushed the government to adjust its policies to fit the current state of drug development for rare diseases, pointing to the estimated 10% of the population suffering from a rare disease as evidence for the common good the changes would bring.

They connect previously disparate research, invent new models for collaboration, and use social media to make their voices heard. They tick off acronyms for government programs like true Washington, D.C., bureaucrats, and they speak about research for their disease like Ph.D. scientists. Without their efforts and collaboration, company executives say, drug development would be difficult, if not impossible.

For these patient crusaders, the motivation is clear: They are in a race for their loved ones’ lives. Jeff and Deena wince each time they see a Facebook photo of a friend’s child with the caption, “Time Flies.” That casual two-word refrain from fellow parents is another reminder that time is running out for their boys.

To download a PDF of this article, visit http://cenm.ag/raredisease.

Comments
Dean Suhr (May 13, 2013 7:22 PM)
Thank you for a very comprehensive look at the very dynamic and complicated drug development world of rare diseases. I can echo almost identical experiences with MLD policy, funding, international research, in collaborations with advocacy groups (including many listed in the article), meetings with the FDA, working with the NIH and ORDR, etc.

MLD (metachromatic leukodystrophy) is another of those ultra-rare disease with perhpas 2500 patients worldwide ... over half of our patients are the late infantile form that strikes at 18-24 months and takes our loved ones 5-7 years later. The pace and amount of research going on is increasing - but the clock will tick away on the current generation of loved ones. We can only look to the future and work feverishly to pull schedules and approvals closer.