Credit: Courtesy of Uli Wiesner/Cornell University
Porous particles with distinct body and arms (TEM image and drawing) might one day be used to separately store and deliver incompatible drugs.

Like jacks of all trades working in construction, materials chemists serve as civil engineers and architects, designing materials from the ground up and considering the form and function of internal and external structures. They also serve as carpenters, masons, and roofers, setting every building block precisely in its place.

Some of the structures have dimensions measuring mere nanometers from end to end, which can make the assembly job highly demanding. Today, though, researchers are using a variety of synthesis techniques that empower them with extreme dexterity and the ability to tailor molecule-sized structures to suit their needs. As a handful of just-published studies show, that level of adroitness enables scientists to custom-design materials with unique properties that lead to improved performance in catalysts, batteries, drug delivery applications, and other areas.

In one case, researchers in China boosted the photocatalytic properties of titanium dioxide by preparing a crystalline form of the material with customized morphology and composition. TiO2 is used extensively as a photocatalyst but suffers from two important shortcomings, explains Tianjin University’s Jinlong Gong, who led the study.

Because of the material’s band gap—an energy range that’s inaccessable for the material’s electrons—TiO2 does not absorb much visible light. That portion of the solar spectrum, therefore, can’t be used in applications. In addition, after TiO2 undergoes light-induced electronic excitation, it often de-excites before the absorbed light can be exploited to trigger decomposition of pollutants or used in other ways. 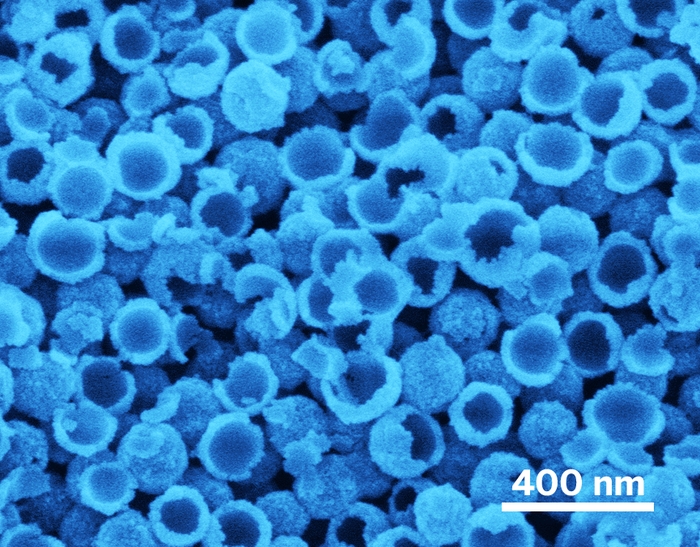 As Gong explains, the presence of gold boosts TiO2’s ability to harvest visible light. And the unusual cup shape further improves light absorption, aids adsorption and diffusion of pollutant molecules, and helps disperse the nanocups in water, all of which improve photocatalytic activity.

Gong stresses that the light-absorbing characteristics of gold nanoparticles can be fine-tuned via particle size, which could lead to customized nanostructures for solar cells and other photo-harvesting applications.

In another recent study, Weiyang Li, Yi Cui, and coworkers at Stanford University turned to nanocrystal engineering to come up with a form of sulfur that can be used as a high-performance battery cathode. Sulfur’s high charge capacity, which is five times greater than that of common metal oxide cathode materials, could make the abundant element a rock star in the long-lasting lithium battery arena.

But sulfur-based batteries’ ability to hold that high charge fades after just a few charging cycles. There are a number of reasons for the diminished ability. Sulfur-based cathodes in test batteries expand, crack, and slowly disintegrate when they react with lithium, the reaction that generates battery power. And loss of charge capacity also results from cathode reactions that form polysulfide compounds that dissolve in the electrolyte solution, the medium in which lithium ions shuttle between electrodes during battery operation.

The Stanford group approached these problems by using a single-step room-temperature reaction to make polymer-encapsulated hollow sulfur nanospheres. Cui explains that by engineering empty space in the interior of the particles and wrapping them in a polymer, the nanospheres don’t expand outward upon lithiation and crack cathodes that contain the nanospheres. In addition, the polymer protects the particles from dissolving, and the nanoscale size enhances ion and electron transport. Tests show that the custom sulfur particles lead to high charge capacity that resists fading even after hundreds of charge-discharge cycles (Proc. Natl. Acad. Sci. USA 2013, DOI:10.1073/pnas.1220992110). 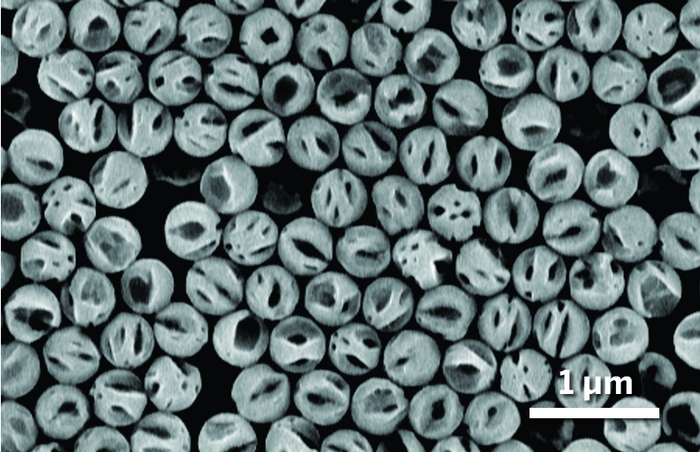 Meanwhile, a team of researchers led by Ulrich Wiesner of Cornell University has come up with a surfactant-directed colloidal chemistry method for synthesizing porous silica nanoparticles featuring structurally distinct compartments within a single particle. These Jekyll and Hyde particles consist of cagelike crystalline cores with up to four precisely aligned arms protruding from the cores’ vertices. The cores’ interior channels sit in a cubic arrangement, whereas those in the arms are arranged hexagonally (Science 2013, DOI: 10.1126/science.1231391).

The team notes that they can control the extent to which the arms grow simply by adjusting the concentration of one component in the synthesis. They add that differences in the compartments’ structures suggest that they could be selectively tailored to have distinct chemical properties. Dual personality in a single particle might be exploited to store incompatible drugs in one place but avoid the incompatibility problem by delivering them on different timescales.

The studies cause Robert A. Wolkow, a physics professor at the University of Alberta, Edmonton, to think back to his days at Bell Laboratories in the 1980s when Louis E. Brus and Michael L. Steigerwald were conducting some of the earliest nanoparticle investigations. “I admired their pioneering nanoparticle studies and have kept an eye on the area ever since then,” Wolkow says. “These most recent advances appear to take substantial steps toward general shape and function control, which further open the door to useful applications.”