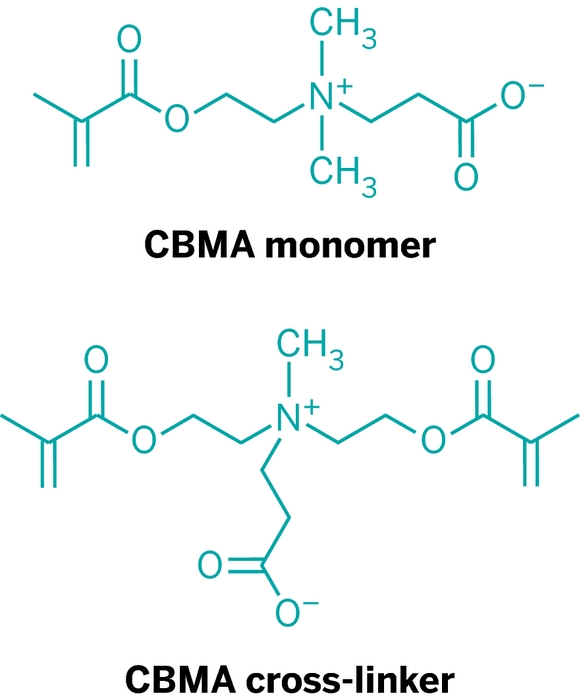 The human body almost immediately recognizes surgically implanted objects as foreign and rushes to surround them with a dense layer of collagen. That so-called foreign-body response is part of an immune-system reaction to a strange object. However, it interferes with medical implants such as drug pumps.

Coating implants with some novel hydrogels may help. The hydrogels are zwitterionic—carrying both positive and negative charges—and are based on carboxybetaine. When Shaoyi Jiang, Buddy D. Ratner, and coworkers at the University of Washington, Seattle, put these hydrogels in mice, the implants resisted the foreign-body reaction for at least three months (Nat. Biotechnol. 2013, DOI: 10.1038/nbt.2580).

The researchers made poly(carboxybetaine methacrylate), or PCBMA, hydrogels from a CBMA monomer mixed with 5% CBMA cross-linker. They found that the new hydrogels adsorbed fewer proteins and cells than did a widely used hydrogel, poly(2-hydroxyethyl methacrylate), or PHEMA.

Both four weeks and three months after the researchers implanted the hydrogels under the skin of mice, the PHEMA implants were surrounded by a dense layer of collagen, a sign of immune rejection. But the collagen structure around the PCBMA implants was similar to that found in normal tissue, suggesting that the immune system was tolerating them. “The zwitterionic hydrogel gives a reaction much more like normal tissue,” Ratner says. Reduced interaction with proteins and cells, the researchers suspect, is behind the improved tolerance.

Although the results are promising, zwitterionic hydrogels have yet to be tested in humans and as a coating on actual implantable medical devices, cautions Ulrike W. Klueh, a professor of surgery and an expert on implanted devices at the University of Connecticut Health Center, in Farmington. In addition, the work doesn’t take into account biomechanical properties such as the size, shape, and elasticity of the hydrogel, which can also affect biocompatibility, says Natalie A. Wisniewski, a San Francisco-based medical device expert.

Still, the researchers are confident. “Given the excellent results in mice and the inert quality of this hydrogel, we believe the translation to clinical implants will be rapid,” Ratner says.