[+]Enlarge
Credit: Jason Reed/Reuters/Newscom
Bowman speaks to reporters outside the Supreme Court on Feb. 19, the day oral arguments were heard. 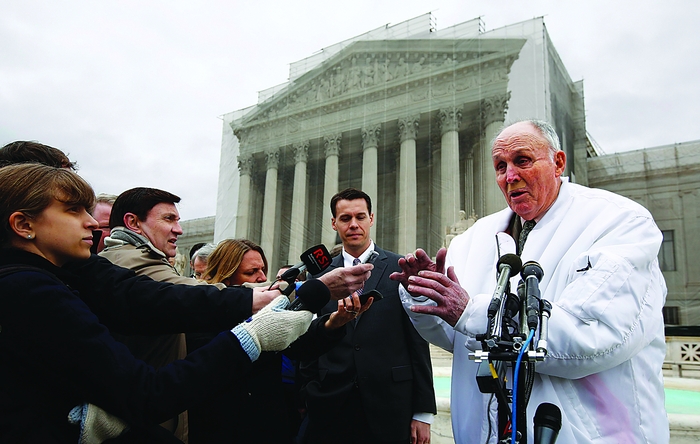 Credit: Jason Reed/Reuters/Newscom
Bowman speaks to reporters outside the Supreme Court on Feb. 19, the day oral arguments were heard.

The Supreme Court ruled on May 13 that an Indiana farmer violated Monsanto’s intellectual property rights when he planted a second generation of the agribusiness giant’s patented soybean seeds without paying the company a fee.

The justices unanimously rejected 75-year-old Vernon H. Bowman’s argument that a random mix of seeds he had purchased from a local grain elevator was not covered by Monsanto’s patents, even though many of the seeds had been genetically modified by the company to resist its weed-killing herbicide.

“The question in this case is whether a farmer who buys patented seeds may reproduce them through planting and harvesting without the patent holder’s permission,” Justice Elena Kagan wrote in the court’s 10-page decision. “We hold that he may not.”

The ruling was hailed by the biotechnology industry, which feared that a decision for Bowman would not only undermine patent protection for the multi-billion-dollar genetically modified seed business but also have a chilling effect on a wide range of research. “The Supreme Court’s commitment to uphold valid intellectual property rights in this case creates business certainty that will benefit all of biotechnology,” says James C. Greenwood, president of the Biotechnology Industry Organization, a trade group with 11,000 worldwide members.

The case began in 1999, when Bowman, a farmer in Sandborn, Ind., bought Monsanto’s Roundup Ready seeds from an authorized dealer for his spring soybean crop. The seeds are genetically altered to resist the company’s line of glyphosate herbicides, which are sold under the brand name Roundup.

In that purchase, Bowman entered into a contract with Monsanto that prohibits farmers from saving or reusing the seeds once the crop is grown. New seeds must be purchased every year.

But Bowman later bought less expensive mixed-variety seeds from a grain elevator and planted them. Such seeds are typically used for animal feed. Since Monsanto dominates the soybean market, Bowman correctly assumed that many of the grain elevator seeds contained the Roundup Ready gene. When the resulting plants bore next-generation seeds, he kept using them.

In 2007, Monsanto found out and sued Bowman for infringing on its patents. A district court, followed by the U.S. Court of Appeals for the Federal Circuit, ruled in favor of the company. In September 2011, Bowman took his case to the Supreme Court.

His lawyers argued that Monsanto’s patent rights were “exhausted,” or ended, the first time its seeds were planted. But the justices said the exhaustion doctrine doesn’t allow farmers to reproduce patented seeds without the patent holder’s permission.

If farmers were allowed to do so, “a patent would plummet in value after the first sale of the first items containing the invention,” Kagan wrote. Such a result would lead to “less incentive for innovation.”

Bowman’s lawyers also argued that the soybeans were naturally “self-replicating.” But the justices didn’t buy what Kagan called the “blame-the-bean” defense. She noted that “Bowman was not a passive observer. ... It was Bowman, and not the bean, who controlled the reproduction of Monsanto’s patented invention.”

The court cautioned that its ruling might not apply in other areas. But Michael R. Ward, a patent lawyer at Morrison & Foerster in San Francisco, says the decision likely does apply in instances where the replication “is not inadvertent—such as cultured cells—and as long as the replication is not a necessary but incidental step in using the item.”

Opponents of genetically modified foods criticized the court’s ruling.“This decision is a setback for the nation’s farmers,” says Andrew Kimbrell, executive director of the Center for Food Safety. The advocacy organization is committed to protecting farmers from “patent persecution and furthering the goals of seed independence and creating a more sustainable agricultural future,” he says.