The U.S. is in desperate need of more science and technology workers. That rhetoric is so deeply ingrained in the culture that everyone from businesspeople to educators to President Barack Obama regularly talks about it.

QUALIFIED CHEMISTS?
[+]Enlarge
Among chemists, unemployment rose during the recent recession and has not returned to its previous levels.SOURCE: ACS annual salary and employment surveys 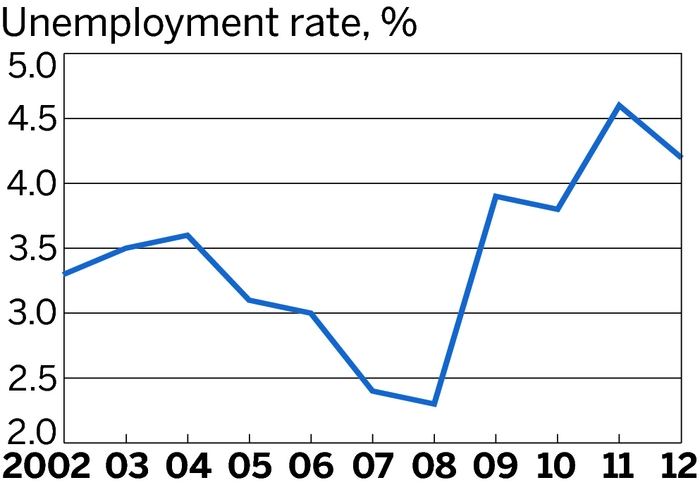 Among chemists, unemployment rose during the recent recession and has not returned to its previous levels.SOURCE: ACS annual salary and employment surveys

That claim has also been bolstered by companies—especially in the information technology (IT) sector—that have argued for years that they have to bring in employees from overseas because they can’t find the workers they need in the U.S. 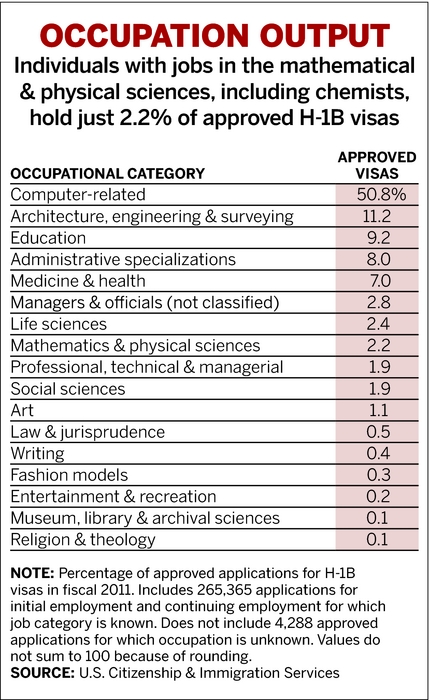 But above-average unemployment and stagnant wages in many science and technology fields are now leading some economists to wonder whether the country really needs more science, technology, engineering, and mathematics (STEM) workers. In 2012, the unemployment rate among American Chemical Society chemists was 4.2%, higher than much of the past decade. 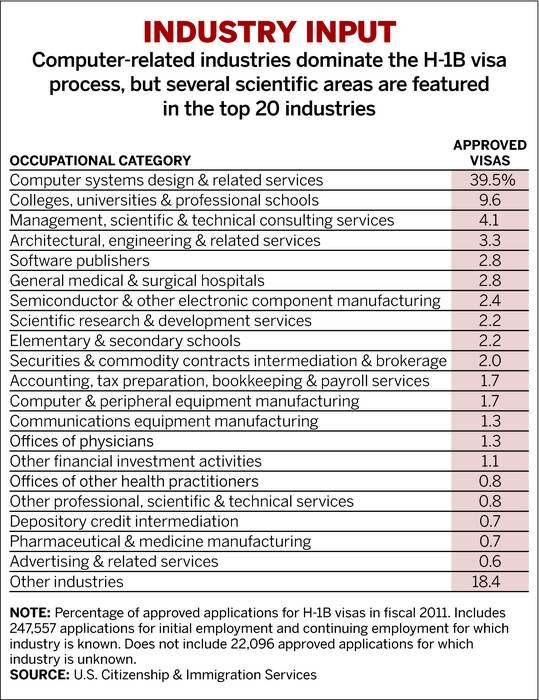 “How is it that the narrative still has any credibility given everyone’s experience and what the evidence says?” asks Hal Salzman, a Rutgers University public policy professor who studies the science and technology workforce. “Do we need to produce more STEM workers? There is no evidence that we need to.”

Immigration reform efforts working their way through Congress have brought the issue to a head. Measures in both the House of Representatives and Senate would significantly increase the number of foreign science and technology workers who may enter the country, both temporarily through H-1B visas and permanently through green cards.

A House bill (H.R. 1227) would remove limits on the H1-B visas for STEM Ph.D. holders. Called the Staple Act, it proposes to staple a green card to all foreign graduates of a U.S. university with a job offer.

Furthest along is the comprehensive immigration reform bill (S. 744) that passed the Senate late last month. The bill would up the yearly number of H-1B visas from the current limit of 65,000 to 110,000 in its first year (C&EN, April 22, page 24). H-1B visas allow companies to temporarily hire foreign workers with specific expertise. And the bill would allow the limit to increase to 180,000 if there is enough demand. Universities and other nonprofit research centers would continue to be exempt from the cap, which allowed the total number of H-1B visas awarded in fiscal 2011 to rise to 269,653.

In addition, green card awards, which allow people to become permanent residents, would be based on merit, including education and current employment, and there would be no limit on green cards for STEM graduates with master’s or doctoral degrees. Around 1 million were issued last year through family connections, employers, humanitarian programs, and a lottery.

High-tech companies have been spending millions lobbying for S. 744. Many claim to have thousands of open positions that they can’t fill and point out that they will have to move the jobs overseas.

“For far too long, our broken immigration system has been hindering our ability to compete globally,” Shawn Osborne, president of the advocacy group TechAmerica, wrote in a letter to senators last month. “Our schools simply do not graduate enough Americans in the STEM fields to fill all the jobs that our companies are creating. This issue has reached a crisis point.”

But that is not what some economists have found. Salzman is coauthor of an Economic Policy Institute report that argues the U.S. does not need more STEM workers.

The report, which focuses primarily on IT workers, says a third of computer science graduates are not working in the industry because they can’t find jobs or found better opportunities in another field. The report also states that two-thirds of entry-level computer and technical positions are currently filled by guest workers, including those on H-1B visas. 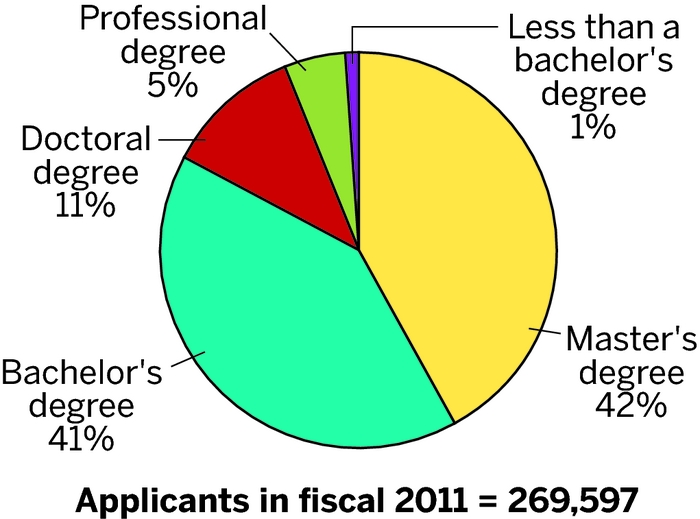 One of these economists’ primary arguments is about wages. Salzman says wages in the IT sector are the same as they were in the Clinton Administration. If the market were truly working, low supply would create higher prices, so companies would be paying more to try to fill vacant jobs.

But wages are stuck, the economists say, because companies have found another way to solve the supply problem: cheap foreign workers. “This isn’t just about wages. It isn’t just about who is getting jobs. It is a deeper change in the nature of these jobs to ones that are suitable for guest workers only—more contract jobs with no benefits—and are undesirable for top domestic talent,” Salzman says.

If companies were willing to raise wages, history has shown, U.S. students will follow the money to enter STEM majors and careers, says Michael S. Teitelbaum, a fellow at Harvard Law School and a senior adviser to the Alfred P. Sloan Foundation. The best example is the rise in the number of computer science majors in the late 1990s in the wake of the high-tech boom. But a bust in the early 2000s meant that many of those graduates could not find jobs.

That boom-bust cycle also affects many science-heavy industries, from biotechnology to defense. And that isn’t conducive to producing highly skilled employees.

Not every economist is convinced that the STEM worker shortage is a myth. Neil G. Ruiz, who studies the issue at the Brookings Institution, says his examination of wages for approved H-1B visas shows that wages are slightly higher than average for the industry. Market economics holds that as a sign of a worker shortage.

Ruiz also points to the huge number of requests from employers for H-1B visas—the cap was met in one week this year—as a sign that employers are willing to go through the arduous process to hire foreign talent.

Even economists who think there is no nationwide shortage acknowledge that individual companies might have a hard time finding trained employees. There can be regional shortages or scarcities in specific emerging industries, Teitelbaum says.

What is truly important is to have an immigration system that allows the best and brightest to come to the U.S. and stay here, says James Duderstadt, former University of Michigan president who has been on several National Academy of Sciences panels that recommend immigration reform. Most of the industrialized world has already made it easier for highly skilled scientists to immigrate, he says. The U.S. has not.

“We end up paying a lot for foreign students’ graduate education and then we show them the door,” Duderstadt says. “These people with advanced skills are worth their weight in gold.”

It is those highly skilled workers that the chemical company Air Products & Chemicals seeks out. “Our objective is to find the right talent and to be blind to the circumstances around them,” says Martha Collins, director of the Global Technology Centers at the company. And if the perfect employee happens to need a visa, the company will work with them to make that happen.

These highly educated workers are not driving the immigration debate, however. Only 11% of H-1B visas went to Ph.D.s in fiscal 2011. The vast majority went to immigrants with bachelor’s or master’s degrees.

And some degree fields don’t need more workers. The life sciences are one of the sectors where wages are falling in most analyses. Last year it was specifically excluded from a bill expanding H-1B visas offered by the Judiciary Committee chair at the time, Rep. Lamar S. Smith (R-Texas). The bill passed the House but was not taken up in the Senate and died at the end of 2012.

One way to deal with the problem of varying workforce demand by sector would be to create an independent panel to examine changing demand and recommend more visas only where evidence shows that there are not enough domestic workers, Teitelbaum says. The U.K. has such a panel that has provided useful advice to the British government, he adds.

The Senate bill includes such a panel but it applies only to lower-skilled employees such as agricultural workers. Rochester Institute of Technology public policy professor Ronil Hira, who testified before the Senate on immigration earlier this year, hopes the bill will get amended at some point in the process to include skilled positions.

Hira would also like the U.S. to start requiring companies to certify that they have looked for domestic workers and didn’t find them. And he is concerned that the plan to give a green card to every STEM Ph.D. or master’s degree recipient will give universities a financial incentive to overproduce graduates. Many foreign students who otherwise might not be interested in coming to the U.S. might be drawn here if they were guaranteed a visa. “There are foreign folks who will end up paying full freight just to get green cards,” Hira says.

The U.S. could set up a STEM immigration system that would really respond to the needs of the country, but all people seem to be hearing now is a push for more science and technology workers, he says. “There is this complexity that gets lost in the conversation.”

Policy
H-1B Visa Caps Reached In A Week
Policy
Science Policy: R&D Tax Credit, Law To Support R&D Up For Renewal
Careers
Off The Chart
Share X
To send an e-mail to multiple recipients, separate e-mail addresses with a comma, semicolon, or both.
Title: Arguing Over Science Visas
Author: Andrea Widener
Chemical & Engineering News will not share your email address with any other person or company.