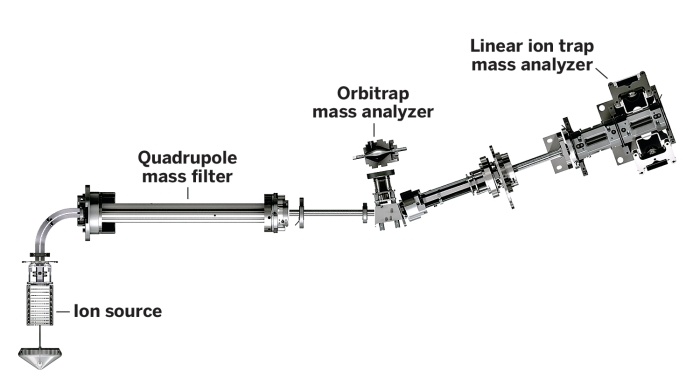 Thermo Fisher Scientific launched the first commercial “tribrid” mass spectrometer, the Orbitrap Fusion. The system incorporates three mass analyzers: a quadrupole, an Orbitrap, and a linear ion trap. The quadrupole is used to select ions for fragmentation in tandem mass spectrometry. The ion path is set up in such a way that selected ions can be directed to either the Orbitrap or the linear ion trap. The Orbitrap offers resolving power of higher than 450,000 and scan rates of up to 15 Hz. A variety of ion fragmentation mechanisms enabling multiple rounds of tandem MS can be performed with the ion trap. The ability to use different fragmentation methods in different rounds of MS increases the achievable amount of structural information. Because of the way the ion optics are arranged, separate packets of ions can be analyzed simultaneously in the Orbitrap and the linear ion trap to reduce analysis time. The system software features “drag and drop” method setup. Thermo Fisher also announced two new triple-quadrupole LC/MS systems—the Quantiva for high-sensitivity analyses and the Endura for increased uptime in applications such as food testing, environmental analysis, and pharmaceutical quality testing.