Shaking Up The Fracking Debate 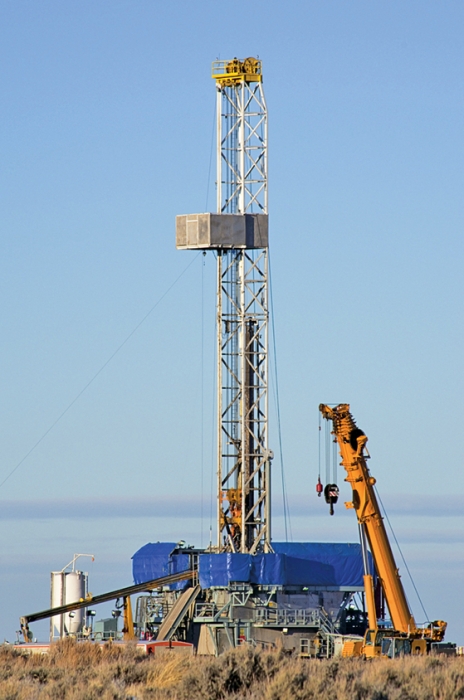 Earthquakes near hydraulic fracturing and waste-fluid injection wells in the central U.S. may be being triggered by massive earthquakes thousands of miles away, according to a new study (Science 2013, DOI: 10.1126/science.1238948).

The study notes the recent rise in the U.S. of small to midsized earthquakes. It points to a relationship between that rise and the increased deep underground injection of large amounts of water and wastewater for hydraulic fracturing, or fracking, for natural gas and oil.

The researchers looked at past earthquake recordings near three U.S. hydraulic fracturing injection sites. They found that pressure in faults at these sites was already approaching critical levels when major earthquakes occurred far away. The distant earthquakes triggered a rise in frequency and intensity of local tremors, the scientists report.

“The injected fluids are driving the faults to their tipping point,” explains lead author Nicholas J. van der Elst, a researcher at Columbia University Lamont-Doherty Earth Observatory. “The remote triggering by big earthquakes is an indication that the area is critically stressed.”

The study points to a magnitude 8.8 quake in Chile in 2010 that sent surface waves rippling across the planet. Sixteen hours later, the powerful quake triggered a magnitude 4.1 earthquake near Prague, Okla., site of several injection wells, the study says. Over the years, swarms of quakes have affected Prague as well as injection-well sites in Colorado and Texas, the researchers say.

William L. Ellsworth, a seismologist with the U.S. Geological Survey, wrote a review of the current study. He tells C&EN that although there is rapid growth in the worldwide use of fracturing technologies and an increase in earthquake activity, the exact relationship between the two remains unclear. Understanding that relationship better is the next research target, he says.

The research has practical consequences, he adds. Building codes near fracturing and injection sites might need to be modified if scientists could specify risk changes, for instance.

“We are sort of in ambulance-chasing mode right now,” Ellsworth says. “Earthquakes happen, and we rush to understand them. We’d be far better off if we had data about the conditions of Earth and the impact of industrial activities before and during their operations.”