Jean-Pierre Clamadieu, who came from rival Rhodia, wants to beef up investment in advanced materials 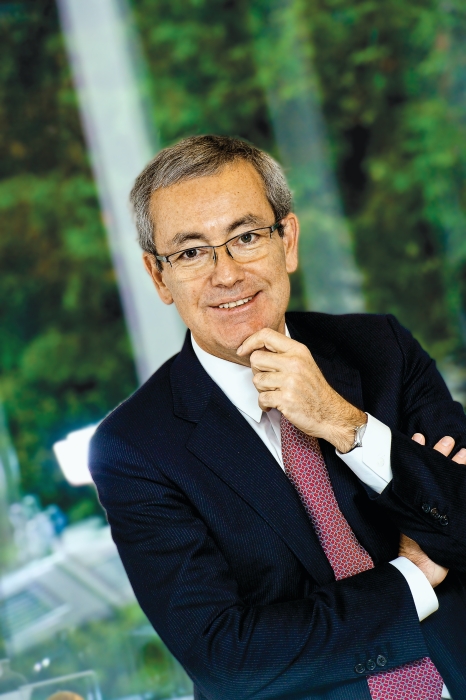 Credit: Solvay
Clamadieu, a Frenchman, is shaking things up at Belgium’s Solvay.

Almost two years after completing its $4.8 billion acquisition of a major competitor, chemical company Rhodia, Solvay has the financial resources to pull off another major acquisition if it wants to, says Jean-Pierre Clamadieu, the combined firm’s chief executive officer.

But the timing isn’t right. “Financially we could do a multi-billion-dollar deal today,” Clamadieu says, “but it is too early for us to do something big and transformational.”

Solvay At A Glance

Instead, his focus is on smaller acquisitions and investment in new plants to speed growth in what the Belgium-based company has deemed its strategic businesses. They include silica for fuel-saving tires, specialty polymers for aerospace and automotive applications, and surfactants for personal care and enhanced oil production.

The 2011 deal that merged Rhodia into Solvay created a firm that is now the world’s 22nd-largest chemical maker, according to C&EN’s Global Top 50 ranking (C&EN, July 29, page 13).

Rhodia, based in France, was a $7 billion-per-year company with businesses in surfactants, silica, rare earths, nylon, and other fields. Solvay, with strengths in soda ash, polyvinyl chloride, and hydrogen peroxide, had sold its pharmaceuticals business to Abbott Laboratories for $7.6 billion and was on the hunt for something big.

The integration of the two firms is largely complete, Clamadieu says. The Solvay name remains; the Rhodia name is disappearing except in Brazil, where it has been used for decades. Solvay has been around for 150 years, Clamadieu explains. The Rhodia name, with the one exception, was used for only about 15 years to describe the chemical business of the former French conglomerate Rhône-Poulenc.

What’s left for Clamadieu is completing the centralization of shared services such as customer service, billing, and accounting into regional centers in Europe, Asia, and the Americas. And an ongoing project, he says, is building a new culture that blends the best parts of the two companies.

The assessments so far are promising. “This looks like a merger that’s been done well,” says Wim Hoste, an analyst at the Belgian investment bank KBC Securities. The merger is expected to result in $330 million in annual savings, which represents about 5% of Rhodia’s revenue at the time of the acquisition.

Solvay is now in a position to generate significant free cash flow, according to Hoste. It could return cash to shareholders or make another sizable acquisition. Either way, “they have room to maneuver now,” he says.

Clamadieu, 54, had been CEO of Rhodia, not Solvay, so it was unusual for him to take the helm of the acquiring company. His success in turning the diversified French chemicals maker from a money loser into a profitable enterprise gave Solvay’s board the confidence to put him in charge. He is the first Solvay chief executive not to have come up through the company ranks.

Clamadieu now would like to create even more international diversity in Solvay’s executive suite, along the lines of what he sees at competitors such as Dow Chemical and DuPont. The top-level executives at Solvay are “a little bit too European today,” he acknowledges. “We have to be as diverse as our end markets.”

Clamadieu also brings an outsider’s willingness to exit long-held businesses. Solvay recently sold Peptisyntha, a custom peptide manufacturer left over from its days in the drug business. In February, the firm said it would divest its majority stake in Solvay Indupa, an Argentinian PVC producer that lost $93 million on sales of $709 million in 2012.

More significantly, in May Solvay reached a deal to combine its European PVC assets with the PVC business of the industrial chemicals maker Ineos, creating a partnership with $5.6 billion in annual sales.

“Long term we want to exit the PVC business,” Clamadieu says. European PVC capacity exceeds demand because of stagnation in the construction industry, PVC’s main market. Terms of the deal give Ineos an option to buy out Solvay’s share in four to six years.

Nylon, a former Rhodia business, is cyclical like PVC, but Clamadieu says that Solvay is holding on to it for now. “We’re focusing on improving the business’s profitability. We’ll see a few years down the road what we’ve achieved and whether any strategic opportunities open up,” he says.

Others have tried that approach. Solutia, which Eastman Chemical bought last year, tried to turn around its nylon operations for years through cost and efficiency improvements but failed. In 2009, Solutia sold the nylon business, which had sales of $1.8 billion, to private equity firm SK Capital Partners for a mere $50 million.

Solvay, in part, seems to be taking a different tack by diversifying its nylon offerings. Now a maker mostly of nylon 6,6 for structural and metal replacement applications, the firm recently said it will build a nylon 6,10 plant in Lyon, France.

Because one of nylon 6,10’s monomers, sebacic acid, is derived from the natural product castor oil, it has eco-friendly appeal to customers, Solvay reasons.

If Clamadieu can turn the nylon business into a cash generator, he will be repeating what he did at Rhodia some years ago with its troubled business in cellulose acetate, a wood-pulp-derived fiber used to make cigarette filters and textiles. “Some people were saying we should sell it,” Clamadieu recalls.

Instead, Rhodia decided to fix it. “When I look at how its performance improved over the last five years, I think it was a very good idea to keep it in the portfolio,” Clamadieu says. Cellulose acetate, which the firm combines with a U.S. sulfuric acid regeneration business for reporting purposes, earned $316 million last year on sales of $1.2 billion.

The nylon plant aside, most of the money Solvay spends on capital projects, about $1 billion in 2012, is directed to a stable of fast-growing businesses. Earlier this year the firm said it would build new surfactant plants in Singapore and Germany. Recently, it increased capacity for the specialty polymers polyether ether ketone and polyaryl ether ketone, used in aerospace and electronics applications, at a plant in India.

Solvay had planned to boost 2013 capital spending to $1.2 billion, but Clamadieu says the firm will actually spend slightly less than that this year “because the economic environment is a bit less dynamic than we expected.”

Solvay is also interested in expanding production of plant-based chemicals. For instance, the firm recently penned a deal to supply the paint maker AkzoNobel with up to 10,000 metric tons annually of biobased versions of the solvents butyl alcohol and acetone. And it recently opened a $160 million facility in Thailand to make 100,000 metric tons per year of the epoxy raw material epichlorohydrin from vegetable-oil-derived glycerin rather than fossil-fuel-derived propylene.

Although Solvay is making select investments in biobased raw materials, Clamadieu is leery of placing big bets on industrial biotechnology. “Sometimes I look at the biotechnology world as a large casino table where you can put your money down and take your chances,” he says. “It is very difficult to find the right balance between risk and opportunity.”

Aside from fixing ailing businesses and growing strategic ones, Solvay is looking to balance its portfolio geographically. Once its exit from PVC is complete, Solvay will have about one-third of its sales each in Europe, Asia, and the Americas. That new balance reflects the growth opportunities in Asia and North America and the lack of them in Europe.

In the U.S., the explosive growth in hydraulic fracturing, or fracking, has made cheap energy available in a way that could not be imagined just five years ago, opening opportunities in markets where Solvay would like to be involved. “We are spending more time in the U.S. looking at opportunities than we did two or three years ago,” Clamadieu says.

Asia also offers significant opportunities for expansion. The Chinese government, for example, wants to spur consumer spending, Clamadieu notes. “That works very well with our focus on selling our products to the automotive and personal care industries.”

But growth in Europe will be restricted by high energy costs, Clamadieu says. Natural gas is so expensive in Europe that power plants using the fuel are shutting down. “And when natural gas is being used as a petrochemical raw material, we are at a disadvantage compared with the U.S.”

Like other European chemical executives, Clamadieu is concerned about power costs on the Continent. He sides with other chemical firms and trade associations that are encouraging European governments to consider fracking to increase energy and feedstock availability in Europe.

Despite Europe’s problems, Solvay’s research effort remains centered there. Last year the firm spent more than $300 million on R&D, about half of which was in Europe, and it expects to spend a similar amount this year. Solvay splits the balance of its R&D between the U.S. and Asia, Clamadieu says.

“We are very close to academic labs in Europe, and we are in a position to draw on the best and brightest scientists in academia,” he says. Although Europe’s share of R&D is likely to slip in the future, it will remain a significant place to conduct research, Clamadieu says.

Unlike capital spending projects that can be delayed during a period of slow economic demand, R&D “is about people and teams,” he says. “You can’t stop a project and expect to simply restart it after a year.”

Among the R&D projects Solvay has under way are biobased seed coatings to aid germination and fertilizer uptake. The firm is also looking at ways to introduce fire-resistant and easily formed plastic foams as structural reinforcements in airliners and automobiles.

Clamadieu’s long-term plans for Solvay include R&D-driven organic growth and growth via acquisition. Neither can be taken for granted, he says. But success in both will likely put Solvay in a position for the next transformational acquisition—when the opportunity and timing are right.