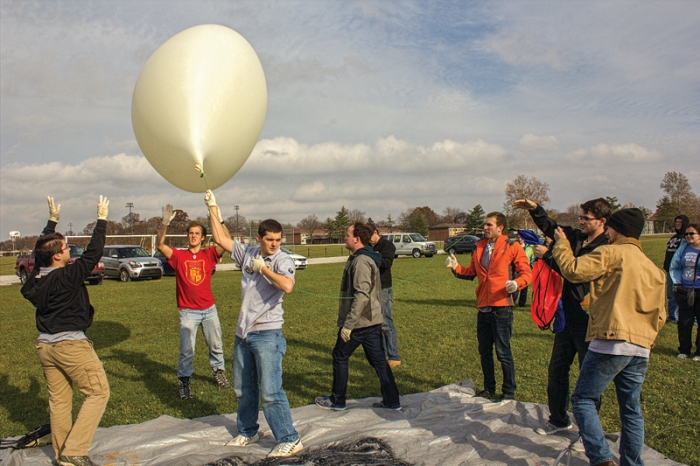 When a balloon escapes into the sky, it has little chance of ever returning. Yet, somehow, a weather balloon launched by Purdue University’s Association of Mechanical & Electrical Technologists (AMET) beat the odds.

The student club—made up of science, technology, engineering, and mathematics enthusiasts—released a balloon on Nov. 16 in an effort to collect atmospheric data needed for launching a rocket into space next year. This mission, however, suffered a setback when AMET lost contact with the balloon after it reached an altitude of 40,000 feet. Recovery of the balloon was further complicated the following day by a powerful storm system that ripped through the Midwest.

“Those storms were throwing houses around and destroying stuff, so we were pretty sure we were never going to see the balloon again,” says Dahlon P. Lyles, AMET project manager and a student researcher at Purdue.

Then, the unlikely happened. Joseph Recker, a farmer near Kalida, Ohio, 170 miles from Purdue’s West Lafayette, Ind., campus, stumbled upon the balloon in his soybean field. Noticing that a video camera was attached to the balloon, Recker played its footage, which contained images of students setting up the balloon prior to launch. When Recker saw that many of the students in the video were wearing Purdue apparel, he reached out to the university for help in tracking down the balloon’s owner.

AMET students were shocked when they heard Recker had found their balloon. “All of us were just amazed that it survived,” Lyles says.

Upon its return, the wayward balloon received a hero’s welcome. It was signed by AMET students and proudly placed on display in the club’s workroom alongside other burst weather balloons from previous launches—not a bad way for the balloon to enter retirement.

A naturally occurring storm may have thrown Purdue’s weather balloon off course, but a crowd-generated earthquake recently threw the National Football League’s New Orleans Saints off their game. During a Dec. 2 loss to the Seahawks in Seattle, the Saints struggled to maintain their composure after the notoriously loud Seahawks fans celebrated a fumble recovery that was returned for a touchdown. The celebration was so rowdy, in fact, it registered as an earthquake with a magnitude between 1 and 2. 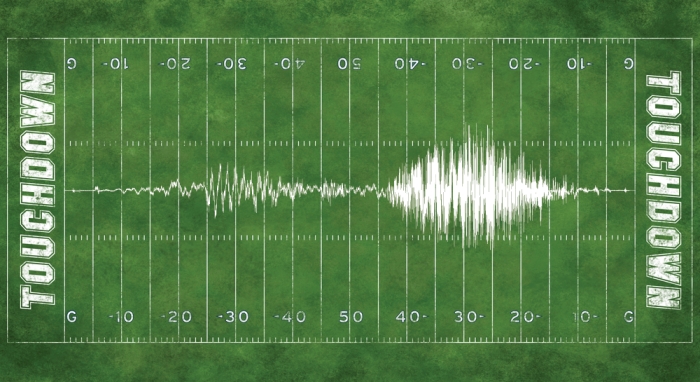 Credit: Shutterstock/C&EN
They will rock you: Football fans create earthquake.

The earthquake was an impressive display of fanaticism for sure, but not necessarily a unique one, say those with knowledge of the seismic activity near Seattle’s stadium. “Any stadium, if you have the right instrumentation nearby, might record something like that, if the fans are as enthusiastic as the Seahawks fans were,” says John Hooper of Magnusson Klemencic Associates, the engineering firm that designed the Seahawks’ CenturyLink Field.

What’s more, it’s possible that similarly sized earthquakes have been produced by Seahawks fans in the past and never reported, says the Pacific Northwest Seismic Network’s John Vidale, who checked for earthquakes during the recent Saints game. Not every game is monitored for seismic activity, he explains. Vidale says he made the unusual decision to track his seismometer’s measurements during the Dec. 2 game because, in part, it was an important game with playoff implications. “I was going to go to a bar to watch it, but this seemed like a little more fun,” he says.

Sure, the game was fun for Vidale, but the seismic findings are scary for any team that has to face the Seahawks in Seattle later this season.