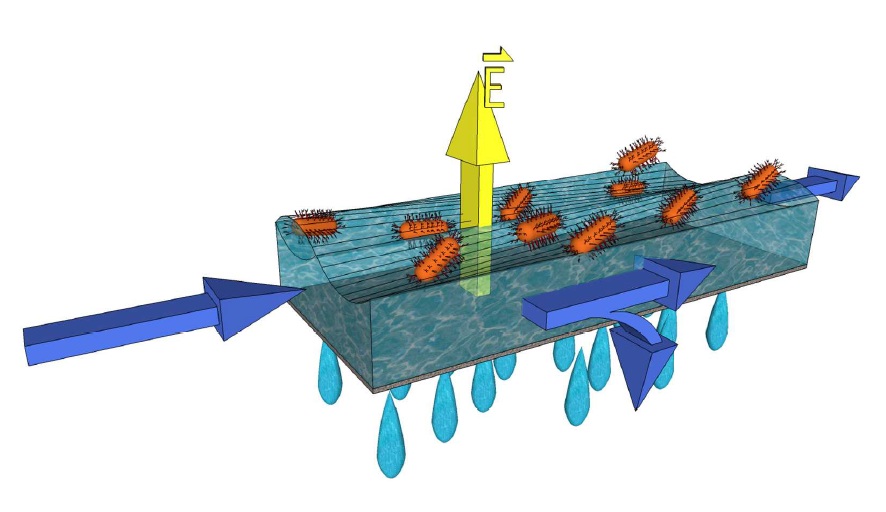 Credit: Environ. Sci. Technol.
Bacteria-laden water flows across an electrically charged filter coated with carbon nanotubes. (Yellow arrow indicates an electric field.) Pure water (blue arrows) flows through the membrane. The charge keeps bacteria from attaching to or laying down a biofilm on the filter.

Bacteria present a sticky and costly problem for wastewater treatment plants. When the microbes accumulate on filters, they secrete a polymeric slime that gums up water filtration. To help prevent these clogs, chemists have synthesized carbon nanotube-based filters that can hold an electrical charge. Bacteria can’t glom onto these charged filters and don’t form clogging films (Environ. Sci. Technol., DOI: 10.1021/es3045168).

To clean wastewater, treatment plants often employ reverse osmosis, a process in which a flow of sewage presses against a nanofilter. In theory, clean water flows through the filter, and most of the salts, ions, viruses, as well as larger proteins and bacteria, do not. In reality, however, bacteria in the wastewater quickly set up camp on the filter by dumping a gummy mix of polymeric proteins and sugars that are “essentially impossible to remove,” says David Jassby, a chemical engineer at University of California, Riverside. This so-called biofilm slows the flow of water through the filter.

Treatment plants prevent biofilms by treating the water with chlorine or extra filters to get rid of the bacteria before the reverse osmosis step. Such pretreatment is costly. Jassby found a way to avoid the bacterial slimes without these extra treatment steps.

He read that in the 1990s a Japanese group limited biofilms in water pipes by applying a small electrical charge to the pipes. He wondered if he and his colleagues could do the same with the reverse osmosis filters.

The researchers made the filter materials conductive by covalently linking carbon nanotubes to a polyamide nanofilter. They tested their filters in tiny chambers that simulated the reverse osmosis process. In one chamber they applied 1.5 volts to the filter, flipping the polarity of the alternating current every minute. In another, they tested a filter with no applied voltage. Through both chambers, they flowed a bacterial broth teeming with Pseudomonas aeruginosa, a species known to form biofilms.

After about 25 hours, the water flow through the filters with no applied charge slowed to half its starting rate. The filters “were absolutely covered in very thick layers of bacteria,” Jassby says. The electrically charged filter also gradually lost flux—slowing to half the original rate after about 80 hours. However, “if we simply shut the pressure off and flushed the membrane for 60 seconds,” Jassby says, “we recovered the flux 100%.” The ability to simply rinse off the bacteria means no biofilms formed on the charged filters, he adds.

Chad D. Vecitis, an environmental engineer at Harvard University, says the novel carbon nanotube coating stops bacteria from sticking to filters with minimal energy consumption. He would like to know why it works.

Jassby and coworkers are actively working on determining the underlying mechanism.

The researchers think the filters make financial sense. They estimated that the addition of the carbon nanotubes increases the filters’ cost by just 1.5%. And the savings offered by eliminating traditional pretreatment could be substantial: The team calculated that a water treatment plant serving Orange County, Calif., could potentially save $17,000 per day if it replaced chemical pretreatment with electrically charged carbon nanotube filters.

Comments
Steve Torosian (March 1, 2013 7:10 AM)
I certainly hope these researchers investigate the nanotoxicity potential of these filters before selling them as CNT's are known to be toxic.
Reply »

Henry (July 31, 2013 11:03 PM)
Good point, definitely a cause for concern seeing as though CNTs are carcinogenic as well. Could always make a buckypaper filter!
Reply »

Carl Schmidt (March 2, 2013 9:46 AM)
Great discovery! I'm looking for a nano silver material for dry conditions. Can you help me find that?
Reply »