Food Chemistry: The amino acid L-citrulline found in the fruit could help athletes avoid muscle soreness after a hard workout

CORRECTION: This story was updated on July 31, 2013, to correct the amount of L-citrulline in one of the beverages given to the subjects and to clarify the procedure for the exercise test.

Before taking a long bike ride on a hot summer day, have some watermelon: The juicy fruit may ward off muscle pains. Researchers report that people who drank watermelon juice before exercising felt less sore the next day than those who drank a pink placebo beverage (J. Agric. Food Chem. 2013, DOI: 10.1021/jf400964r). They also found that cells absorb the presumed active ingredient, L-citrulline, more readily from unpasteurized watermelon juice than from plain water spiked with the compound, suggesting the natural source is the optimal delivery medium.

The Next Sports Drink?
[+]Enlarge
Credit: Shutterstock
Watermelon drinks, like this smoothie, could help cut down on muscle soreness after intense exercise. 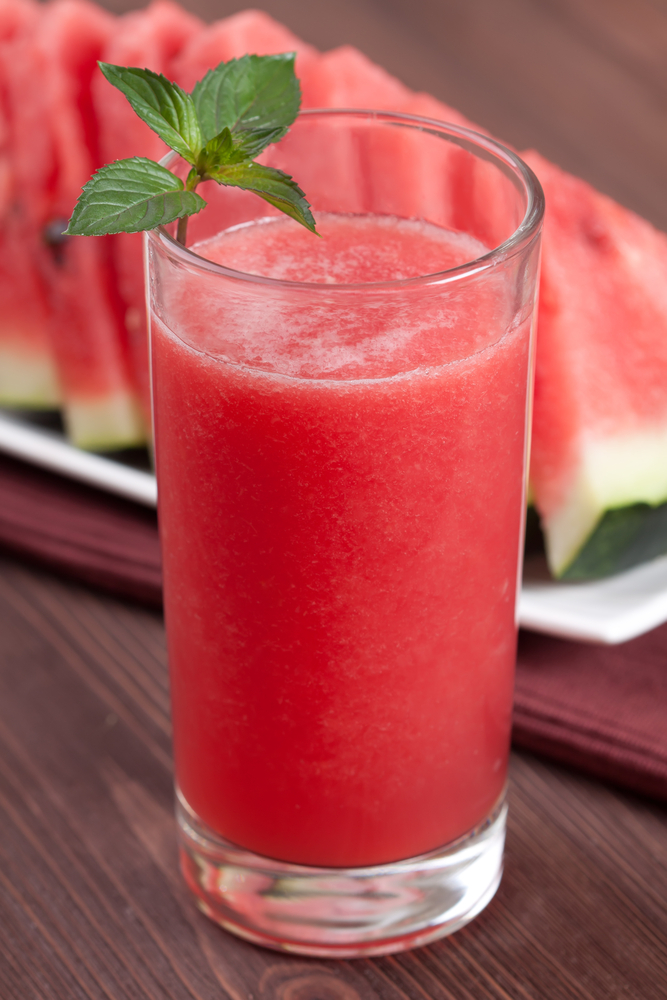 Credit: Shutterstock
Watermelon drinks, like this smoothie, could help cut down on muscle soreness after intense exercise.

L-citrulline is an uncommon amino acid that, until recently, hasn’t gotten a lot of attention, says Encarna Aguayo of the Technical University of Cartagena in Spain. Scientists now recognize that L-citrulline has antioxidant properties and may enhance athletic performance, she says. For example, studies have shown that L-citrulline in supplement form accelerates removal of lactic acid from muscles, allowing for more intense training and faster recovery. Watermelon is one of the few natural foods with an abundance of L-citrulline, so Aguayo wanted to test whether the fruit’s juice could function as a sports drink.

First, the researchers purchased 10 seedless watermelons from a local market in Cartagena and juiced the fruit. They pasteurized some of the juice by heating it to 80 ˚C. The rest was left unpasteurized. Pasteurization kills harmful pathogens, but it also can “reduce the bioavailability of many bioactive compounds, reducing the food’s functional properties,” Aguayo says.

Aguayo and her team measured the concentration of L-citrulline in the watermelon juice with high-performance liquid chromatography and mass spectrometry and then adjusted the concentration to a standard 0.685 mM. They also spiked water with the amino acid at the same concentration. The researchers then added the solutions to cultures of human colon cancer cells. After eight minutes, the researchers measured how much L-citrulline remained outside the cells. They found that cells bathed in the unpasteurized watermelon juice had absorbed 19% of the L-citrulline, while absorption from pasteurized juice and spiked water never got above 13% and 12%, respectively. Better absorption should lead to a more potent benefit, Aguayo says.

Next, the researchers recruited seven men who regularly played sports but were not competitive athletes. The men participated in an exercise test on three separate days. They cycled for 11 minutes on a stationary bicycle, alternating between periods of intense pedaling and rest. Before getting on the bike, each participant drank half a liter of one of three beverages: watermelon juice with 1.17 g of L-citrulline, watermelon juice enriched to have 6 g of L-citrulline, or a pink, fruity drink without watermelon or L-citrulline. On the day after the trials in which the men drank either type of watermelon juice, they reported essentially no leg soreness. Meanwhile, after the trials when they imbibed the placebo, they reported feeling sore.

The take-home message from this study, according to Thomas Swensen of Ithaca College, is that it’s better to drink unpasteurized watermelon juice than to take an L-citrulline supplement. Swensen says the next step would be to see if drinking the juice helps athletes perform better the next day because they are less sore. Aguayo plans to tweak the concentration of L-citrulline in watermelon juice to determine the optimal concentration for the prevention of muscle fatigue.

Comments
Tony (July 25, 2013 5:10 PM)
Lactic acid (more importantly the lowered blood pH due to protons) is flushed out of muscle cells within minutes of stopping intense exercise and is no longer believed to be the cause of muscle soreness. Delayed Onset Muscle Soreness (DOMS), which is believed to be micro-trauma of muscle fibers, is more likely the culprit of feeling sore.
Reply »

Ron W (July 26, 2013 8:33 AM)
The in vivo study design is lacking a valid control. What about the case of L-citrulline supplementation with 1.17 g? The cancer cell study did not indicate supplementation does not work only that the absorption of pure citrulline in water is less effective than citrulline delivered in its natural state. [Here in the Northeast US it is kind of difficult to get watermelons from October to April. Supplementation would be preferred].

unwarranted_happines (July 27, 2013 12:21 AM)
I don't really like this article. Reading it, it seems that L-citrulline may have nothing to do with the results of less muscle soreness (granted it's an n of 7) since supplementation didn't have a similar effect. I understand they are trying to argue that this is because absorption is better when ingesting L-citrulline in watermelon juice; but, I wish they had used a control of watermelon juice without the amino acid to rule out the possibility that sugar or salt (which I think are already known to potentially help prevent muscle soreness?) are influencing their results.
I don't really know what to make of the in vitro experiment either. I can't imagine cells are too happy about being incubated in water or watermelon juice. It would be nice to see a control where they show that uptake of amino acids in general is not inhibited by this technique. Also it seems a stretch to compare this to intestinal absorption.
Reply »

Oleg (July 27, 2013 1:34 AM)
Is eating watermelon just as effective of does pulverizing it into juice make it better for absorption in the body?
Reply »

Jatin (July 27, 2013 1:42 AM)
I want to know how did they group participants, what activity did participants do in their regular training or sports, was the intensity of the testing protocol kept the same for every person or individualized by some normalizing factor? Also did they find whether and by how much the two watermelon drinks differed in soreness reduction and what was used to determine leg soreness? a self report survey?
Reply »

Shock (July 27, 2013 6:08 AM)
As a sports person this is quite interesting especially because soreness is a real nuisance the next day. but is it that accurate with a test sample of a mere 7 people? Also, the people who drank the placebo reported soreness, can't this be linked to them being less fit than the ones who drank the watermelon juice. Either way it's worth a try.
Reply »

Dude (July 27, 2013 5:55 PM)
Who gets sore from 11 minutes of cycling? I don't think these guys they tested were very well conditioned to start with. Also, isn't cycling primarily concentric contraction, which leaves practically no soreness any way?
Reply »

Based on some of your comments, we realized our description of the exercise test wasn't complete. All seven of the participants completed the cycling test three separate times on different days, each time drinking a different beverage before getting on the bike. The researchers compared each subject's soreness between the three trials. The story has been amended to better describe the test procedure.
Reply »

Lewis De Payne (August 23, 2013 5:54 PM)
Several peer-reviewed studies show that lycopene is likely responsible for the lack of sore muscles. A cup of watermelon contains a bit less than 10 mg lycopene, and thus a glass of watermelon juice will contain around 20 to 30 mg... a substantial amount whose absorption (and bioavailability) are quantifiably known.

In the study you cite, a valid control is not present, nor are adjustments made for confounding factors. In this case, lycopene would be one of the confounding factors. Give the athletes water with lycopene (supplementation), and their muscles won't be as sore after exercise either - despite not ingesting L-Citrulline.

Shame on these researchers for drawing far-fetched conclusions from their loosely coupled study. As researchers, they should know better.
Reply »

Mike K. (February 4, 2014 11:41 AM)
Don't knock it until you try it. I've taken it in supplements by itself (kinda pricey for rec dosage) and it is also present in several big name pre workout supplements. I've not tried just eating watermelon for similar results. When taking the pre workout supplements it was hard to tell what increased my workout performance ( most are full of several things that claim to increase performance). I stopped taking all supplements w the exception of just l-citrulline (nature something was the brand/powder form). On both the pre workout supplement and l-citrulline alone i was working out w 215 on the bench (5-6 times). That's not what impressed me. I would do a drop set right after (30-60sec downtime) of 135 for 28-30 reps. Would do several other chest workouts an usually another major body part (typically spent 2 hrs in the gym). Was rarely sore the next day. But that's what I didn't like about it. I enjoy the pain the next day. You know you've accomplished something.

Now I take no supplements period. Bench has dropped to 185 for my workout(5-8 times) and I'm lucky to get 15-20 out of 135. Common sense would tell you that taking l-citrulline in natural form like with watermelons would yield better results. FYI. My workout didnt suffer instantly. It took several months for it to lvl out where it is now ( guessing the lvls of it were still elevated ). I'm also fatigued after a hour. Long story short. Just try adding watermelon into your diet and see what it does for you. It's natural and can't hurt in moderation. Also aside from working out. My sex life drastically improved. I'm in my 30's and dont consider myself a spring chicken anymore. Made me feel like I was 18 again.