Environment: Wells depleted of natural gas could be filled with significant amounts of captured CO2 emissions from power plants

CORRECTION: This story was updated on Sept. 24, 2013, to correct the description of the size of the Marcellus shale and of how the researchers obtained diffusivity data on the shale.

The same wells that energy companies drill to extract natural gas from shale formations could become repositories to store large quantities of carbon dioxide. A new computer model suggests that wells in the Marcellus shale, a 600-mile-long formation in the northeastern U.S. that is a hotbed for gas extraction, could store half the CO2 emitted by the country’s power plants from now until 2030 (Environ. Sci. Technol. 2013, DOI: 10.1021/es401221j). 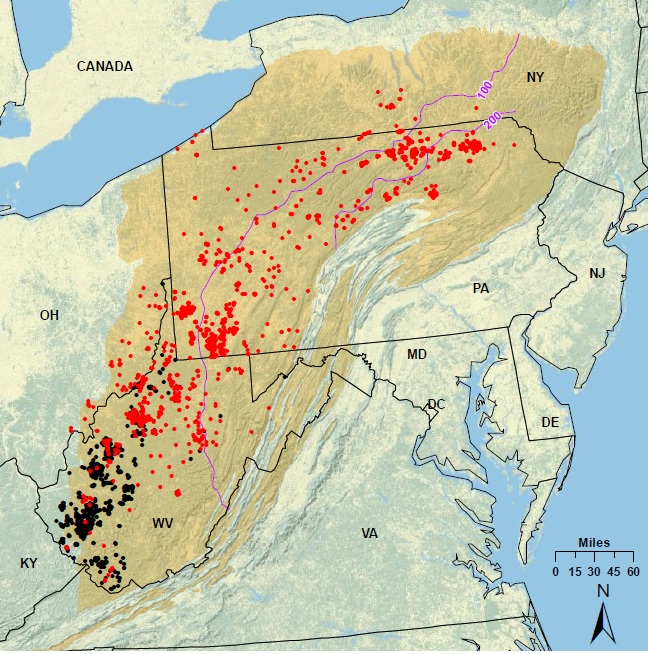 Although switching from coal-fired power plants to ones that burn shale gas could slow the growth of CO2 emissions, the overall demand for energy is increasing, so total carbon emissions will continue to climb, says Andres F. Clarens, an environmental engineer at the University of Virginia. Some researchers have proposed mitigating this trend by capturing CO2 at power plants and injecting it into deep saline aquifers, a process called geologic sequestration. But Clarens sees potential to sequester CO2 in depleted shale-gas wells.

Shale is not very permeable, so “these are not the most intuitive places to store CO2,” Clarens says. “It’s hard to get anything in or out of it.” But the hydraulic fracturing, or fracking, process used to extract methane could provide a way to pump in CO2. In the fracking process, pressurized liquid blasts the shale rock, creating cracks that allow the gas to seep out to the well. The network of cracks left behind could be filled up with CO2 before the depleted wells are sealed. The idea is appealing because it would not require building any new infrastructure to sequester CO2. For example, storing the emitted gas in saline aquifers would require new drilling. By putting CO2 back into depleted shale gas formations, Clarens says, “we could close the loop on carbon.”

To examine the feasibility of storing CO2 in shale, Clarens built a computer model to estimate how much the Marcellus shale could handle. One main input to the model is diffusivity—a measure of how readily methane comes out of wells in a particular shale formation. For wells in the Marcellus shale in Pennsylvania, the team used data from a state database to estimate diffusivity. This methane data is used to predict how readily CO2 would diffuse into the shale. The other main input to the model describes the gas-absorbing properties of organic matter, called kerogen, within shale, which have been studied experimentally by other groups. Micropores within kerogen store most of the methane in these formations. Clarens expects CO2 would move into these pores and adsorb to the kerogen surface.

The storage capacity numbers are encouraging, Clarens says. CO2 would move into the well much faster than methane comes out, and it would stay there. That’s good news, he says, because if it takes too long to get the gas underground, the process would be too expensive and impractical.

Based on the amount of gas the formation is expected to produce, he calculates that the Marcellus shale could store between 10.4 and 18.4 billion tonnes of CO2 between now and 2030. That amount is more than half of the expected total U.S. CO2 emissions from power plants over that time. And power plants account for about one-fifth of the country’s emissions. Clarens has started experimental studies on crushed shale to validate the storage potential predicted by the model.

Sarah Gasda, an engineer specializing in CO2-sequestration modeling at the Center for Integrated Petroleum Research in Norway, says storing CO2 in shale wells has potential and that the use of existing infrastructure is a good selling point. However, she cautions that the model does not consider several important factors, including the buoyancy of the gases, the heterogeneity of these kinds of formations, and the presence of water and other fluids, all of which will affect how much CO2 will be absorbed by fractured shale. But given the carbon problem in the U.S., “all options should remain on the table,” Gasda says.

Comments
Chad (September 18, 2013 7:44 PM)
At what price? I see no reason to believe this would be remotely economic relative to other methods of "sequestering" carbon, the cheapest of which is to just quit burning coal and leave the already "sequestered" carbon in the ground in the first place.
Reply »

James K (September 19, 2013 10:47 PM)
I could not agree more that we should move away from fossil fuels. However, even if humanity were able to agree that no new coal fired power station will be constructed from today on (and there seems little chance of such agreement), we have many recently commissioned power stations (esp. in China) that are locked into burning coal for the next 30 to 50 years.

Your choice then would be between sequestration or no sequestration. At what price do we not sequester?
Reply »

Wing Wong (September 19, 2013 6:50 PM)
Another factor to consider would be that this is not a solid/stable form of carbon sequestering, but merely an underground chamber to pump pressurized carbon dioxide into. A foreseeable risk of this technique would be what happens if a catastrophic failure occurs, resulting in a mass eruption of carbon dioxide? This would result in a non-breathable blanket of C02 that would asphyxiate living things(animals/people) caught in the region. Something akin to limnic eruptions.

The exposure of water to carbon dioxide in the pressured underground regions may also lead to other unexpected side effects, such as acceleration of underground mineral erosion.

The concept of using an exhausted shale fracking well to store carbon dioxide is an interesting one, but there potentially life threatening risks to consider.
Reply »

And how certain would we be that the captured CO2 wouldn't be re-released if an area nearby was fracked or the seal on the well failed?
Reply »

John Muir (September 20, 2013 6:20 PM)
This is an interesting idea, but implementing it would be far too expensive to be practical (50% increase in the cost of electricity), and you can imagine the pushback of one region accepting all the C02 from the nation.

Even if coal had zero carbon, burning it releases all kinds of harmful elements and compounds into the environment. For example, what is the half-life of mercury?

Take a look at www.greenfireenergy.com for a much better solution - using supercritical C02 as the working fluid for geothermal systems. Clean baseload power with zero emimssions at competitive prices.

Just because the U.S. EPA has labeled C02 as such does not make it so.

Furthermore, the US Supreme ruled that congress gave the EPA the authority to declare C02 a pollutant, the court does not rule on the veracity of that EPA decision but merely on EPA's legal right to make it.

C02 is supposed to be a "green house gas" that causes global warming. Much of the increase in C02 in the atmosphere is formed by the increased evaporation of the oceans due to an increase in global temperature.

Which came first the chicken or the egg?
Reply »