Desalting Sponge
[+]Enlarge
Credit: Environ. Sci. Technol.
In a new forward osmosis method, a saline solution (far left) sits on one side of a semipermeable membrane (gray). Fresh water passes through the membrane and is absorbed by a hydrogel (red spheres). Next, a second gel (blue spheres) absorbs the fresh water. When a solar concentrator focuses sunlight onto this second gel, the material shrinks and releases the trapped pure water. 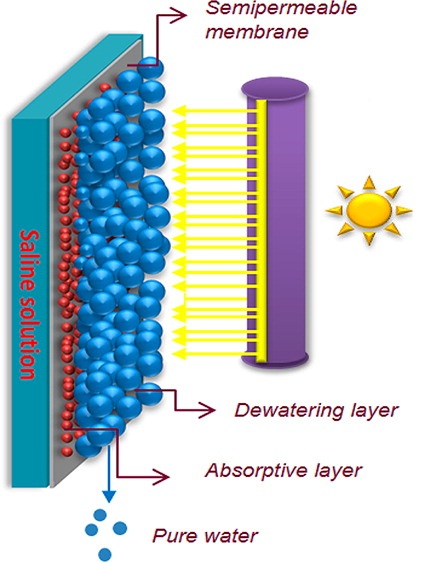 Credit: Environ. Sci. Technol.
In a new forward osmosis method, a saline solution (far left) sits on one side of a semipermeable membrane (gray). Fresh water passes through the membrane and is absorbed by a hydrogel (red spheres). Next, a second gel (blue spheres) absorbs the fresh water. When a solar concentrator focuses sunlight onto this second gel, the material shrinks and releases the trapped pure water.

With energy-efficient desalination techniques, water-starved communities could produce fresh water from salty sources such as seawater and industrial wastewater. But common methods like reverse osmosis require pumping the water, which uses a substantial amount of energy. So some researchers have turned to forward osmosis, because in theory it should use less energy. Now a team has demonstrated a forward osmosis system that desalinates salty water with the help of sunlight (Environ. Sci. Technol. 2013, DOI: 10.1021/es403266y).

Like reverse osmosis, forward osmosis removes solutes from water via a semipermeable membrane. But instead of pumping the water through the membrane, forward osmosis methods rely on osmotic pressure to drive water across it. To create this osmotic pressure, researchers place so-called draw agents, such as solutions of other salts or absorbent hydrogels, on the other side of the membrane. Once these materials draw fresh water across the membrane, researchers have to find a way to extract the water from them. Developing an energy-efficient way to do this last step has been a challenge for researchers.

A team led by Huanting Wang and George P. Simon at Monash University, in Australia, created a forward osmosis device that extracts the fresh water via a dual-layered hydrogel. In their device, fresh water is pulled through the semipermeable membrane into a hydrogel made from N-isopropylacrylamide (NIPAM) and sodium acrylate. The gel swells 10 to 20 times in volume. Next, a second, temperature-sensitive hydrogel made from just NIPAM absorbs the water from the first gel. When the researchers heat the second layer to 32 °C, the gel collapses and squeezes out the fresh water. The team’s device uses focused sunlight to heat up the gel.

The team tested the dual-layer device with a solution of 2,000 ppm sodium chloride, a standard concentration for brackish water. Once the hydrogel was primed with water, the module could produce fresh water at a rate of 20 L/m2 h. This is similar to the rate of forward osmosis using other draw agents, such as a solution of ammonium bicarbonate. To extract fresh water from that agent, researchers must heat the solution to about 60 °C to convert the ammonium bicarbonate salt to gases that can be removed by distillation at a lower temperature.

Although the flow rate of extracted fresh water was encouraging, the first step in the process—the hydrogel absorbing water—was an order of magnitude slower than that of other draw agents, Wang says. To improve the performance of the system, the group envisions running many hydrogel modules in parallel.

The team’s concept is truly novel, says Jeffrey R. McCutcheon, a chemical engineering professor at the University of Connecticut. “It’s essentially an osmotic sponge that squeezes itself out when heated,” he says. And the method requires minimal energy compared to other draw agents, because the device extracts the fresh water at a relatively low temperature. He cautions, however, that the system’s rate of freshwater production must improve by an order of magnitude to be competitive with other osmotic methods.

The device also struggles with desalinating seawater, which has a salt concentration about 17 times greater than the team’s test solution, Wang says. As a result, he says the current method would be most useful for purifying industrial wastewater streams that have a lower salt concentration. What’s more, waste heat from industrial processes could be used to power the freshwater extraction. “It would be a perfect combination,” Wang says.

The team is now working with Shanghai-based steel company Baosteel to scale up the system for industrial use.

Water
How extreme bacteria squeeze water from a stone
Water
超高效的海水淡化
Water
How peracetic acid is changing wastewater treatment
Share X
To send an e-mail to multiple recipients, separate e-mail addresses with a comma, semicolon, or both.
Title: Sunlight Helps Turn Salty Water Fresh
Author: Deirdre Lockwood
Chemical & Engineering News will not share your email address with any other person or company.

Juty (November 14, 2013 7:42 AM)
Though this kind of methods is much more inviromental,it quite difficult for it to be used in large scale.
Reply »

Yegammai Subramanian (November 20, 2013 11:52 PM)
Could this be a boon to water-starved Chennai? Sincerely hope this turns out to be feasible on a large scale.
Reply »