Trees planted along a city street screen residents from sun and noise—and from tiny particles that pollute urban air. A new study shows that tree leaves can capture more than 50% of the particulate matter that’s a prime component of urban pollution and a trigger for disease (Environ. Sci. Technol. 2013, DOI: 10.1021/es404363m). 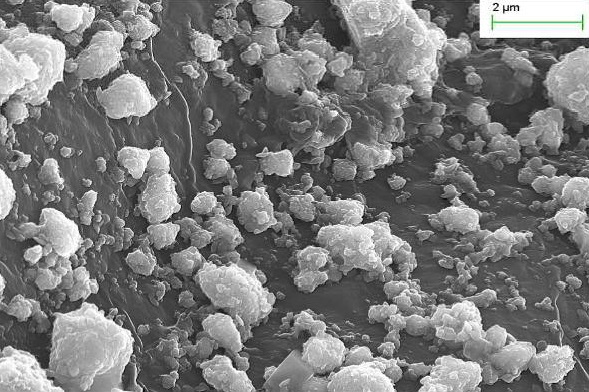 In urban settings, particulates come primarily from car exhaust, brake pad wear, and road dust and can contain metals, such as iron and lead. The Environmental Protection Agency classifies particulates in three size ranges: less than 1 μm (PM1), up to 2.5 μm (PM2.5), and up to 10 μm (PM10) in diameter. These particles are tiny enough for people to inhale and can exacerbate heart disease, asthma, and other health conditions.

Researchers want to understand how trees capture particles so that urban planners might eventually take advantage of these natural tools for mitigating pollution. However, modeling this process is challenging because air flow and particle movement on a street follow complex fluid dynamics. Models have shown wildly varying results for just how much particulate matter trees can trap, with some as low as 1% and others as high as 60%.

Barbara A. Maher and her colleagues at Lancaster University, in the U.K., wanted to get some numbers from a real-life situation that they could feed into the models, so they decided to study a row of eight houses without a tree screen on a busy street in Lancaster. First, they tracked the amount of dust and particulate matter entering two of the houses as controls. Using automated dust monitoring devices, they collected data on the sizes and concentrations of particles every 10 minutes for five days. They also used simple wet wipes to gather dust from LED or plasma television screens inside four houses and then analyzed the samples with magnetic remanence, a technique that provides information on concentrations of iron-bearing particles.

Then the team placed a screen of 30 young silver birch trees in wooden planters in front of four of the houses, including one of the control houses, for 13 days. Wipes from all eight houses showed that ones with the tree screens had 52 to 65% lower concentrations of metallic particles. A comparison of all of the dust monitoring data from the two original control houses confirmed that drop, showing a 50% reduction in PM1, PM2.5, and PM10 in the house with the trees in front.

By examining the silver birch leaves with a scanning electron microscope, the researchers confirmed that the hairy surfaces of the leaves trapped metallic particles. Like the particles measured inside the houses, these metallic particles are most likely the product of combustion and brake wear from vehicles passing by. Previous work has indicated a strong correlation between the amount of material identified by magnetic remanence and benzo(a)pyrene, a carcinogenic polycyclic aromatic hydrocarbon found in particulates, Maher says.

The team’s swipe method for monitoring particulate matter deposition is novel, says A. Robert MacKenzie of the University of Birmingham, in the U.K., who has modeled particulate movement on tree-lined streets and worked on quantifying how a “green wall” of vegetation acts as an air filter (Environ. Sci. Technol. 2012, DOI: 10.1021/es300826w). However, the new work doesn’t show the actual deposition rate on the trees’ leaves—which is a crucial missing piece of the models, he says.

The new work is an “interesting case study” that suggests a big effect of tree screens at street level, MacKenzie says. He would like to see future work that shows trees’ impacts all around: The tree screen may be blocking particulates in one direction, for people in their homes, but contributing to higher concentrations of particulates down the road.

Water
After a devastating fire, what’s in the water?
Pollution
Some types of trees excel at removing particles from polluted air
Environment
Agricultural soils are major source of NOx emission to California’s air
Share X
To send an e-mail to multiple recipients, separate e-mail addresses with a comma, semicolon, or both.
Title: Trees Capture Particulate Matter From Road Exhaust
Author: Naomi Lubick
Chemical & Engineering News will not share your email address with any other person or company.

Gabriel Eguia (December 3, 2013 1:27 PM)
Well I think evergreens will be less useful since the surface area of their leaves is considerably lower than that of deciduos plants.
Reply »

Rob (December 7, 2013 1:06 PM)
Silver Birch trees have a particularly high tolerance to PM which means they are able to withstand high levels of particles. Particles are also washed off the leaf surface when it rains, washing the PM away and 'cleaning' the leaf surface.
Reply »

shmoo (November 26, 2013 12:10 AM)
The trees collecting and accumulating the particulates is a good thing. It returns the pollutants that we have stirred up into the atmosphere back to the soil, where it belongs. It's part of the cycle.
Reply »

shmoo (November 26, 2013 5:04 AM)
you could use evergreens but they are dormant in the winter, they would act mostly as a physical screen.
Reply »