A look at recent patenting activity in metal-organic framework compounds, brought to you by C&EN and CAS 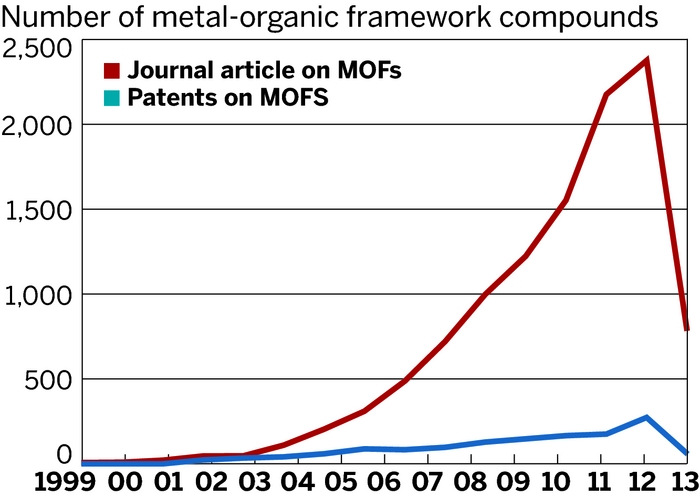 Metal-organic framework compounds (MOFs) are marching toward commercialization. A type of coordination polymer synthesized from metal ions or metal clusters and organic linking ligands, MOFs have been of research interest for years. A slew of research papers have shown that modifying metals and ligands can lead to MOFs with pores whose size, shape, volume, and reactivity can be customized for particular properties and applications. More recently, patents claiming commercial applications for MOFs have begun to climb, according to data from Chemical Abstracts Service databases. A few such applications are highlighted here. 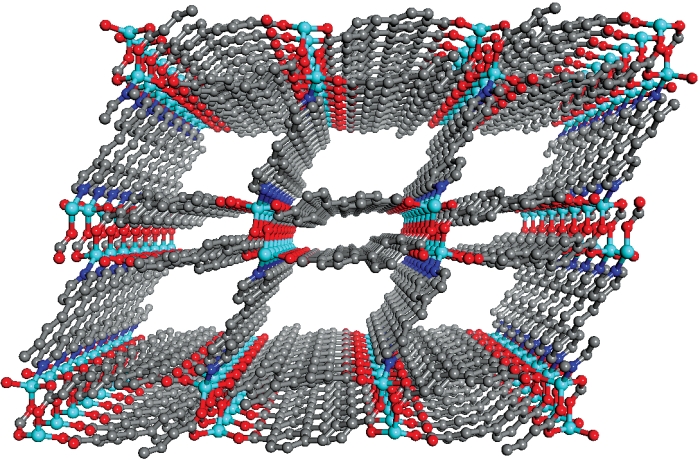 With heightened worldwide awareness of the potential dangers of hidden explosive materials has come solutions for explosives detection. To make it easier to detect plastic explosives, manufacturers now by law include a volatile marker, such as 2,3-dimethyl-2,3-dinitrobutane (DMNB), in their products. Chemists at Rutgers University have developed a cost-effective technique for detecting DMNB and thus plastic explosives (U.S. 20120178173). Jing Li and coworkers synthesized a series of polymeric coordination compounds by heating a mixture of a metal salt, such as Zn(NO3)2 or Cd(NO3)2, with a polyfunctional ligand possessing a bidentate binding site, such as 4,4'-biphenyldicarboxylate, and a bis-pyridine ligand, such as 1,2-bipyridylethene. The coordination of metal cation to the polyfunctional ligand and the subsequent binding of the bis-pyridine ligand form a three-dimensional network of channels. The frameworks’ 20-Å-wide channels are the right size to allow gas-phase DMNB to penetrate and be sorbed. These MOFs are also luminescent under ultraviolet radiation. But that luminescence is quenched when gas-phase DMNB penetrates the MOF. MOFs’ ability to rapidly detect DMNB with high sensitivity could be the basis of a handheld sensor for plastic explosives, Li says.

Capturing carbon dioxide from industrial emissions would reduce the amount of the greenhouse gas released into the atmosphere. Thanks to their low cost, aqueous amine solutions are currently the most viable adsorbents for capturing CO2. But they are not without drawbacks: Regenerating them requires considerable heat, resulting in evaporative loss, and they must be used in concert with corrosion inhibitors. Alternatives based on zeolites and amine-modified silicas absorb CO2 through the formation of carbamate or bicarbonate species. But their low selectivity for CO2 over other components in flue gas has significantly limited their use. MOFs might provide a solution, according to work from researchers at the University of California, Berkeley and the University of Sydney (WO 2013059527). Chemist Jeffrey R. Long and coworkers started with MOFs possessing coordinatively unsaturated metal centers along the pore surfaces (Ca, Fe, Mn, Cu, Co, Ni, Cr, or Cd coordinated to 1,3,5-benzenetristetrazolate or 1,3,5-benzenetristriazolate). They filled the pores of the MOFs with di- or trifunctional ligands where one functional group is a basic nitrogen group that binds CO2 and another functional group is strongly bonded to the metal. Such MOFs are cost-effective and can selectively remove even small amounts of CO2 from a number of gas mixtures, the researchers report. Compared with traditional amine scrubbers, these MOFs eliminate the need for aqueous solvents and cost less to regenerate.

Using metallic lithium as an anode material gives rise to rechargeable batteries with higher energy capacities. But repeatedly charging and discharging such batteries leads to the growth of lithium-based dendrites that pierce the flexible polymeric separator used to separate anode from cathode. As a result, batteries with lithium metal anodes haven’t reached their commercial potential. Nitash P. Balsara and coworkers from UC Berkeley recently described a rigid, MOF-based battery separator that might change that (U.S. 20140045074). They make the separator, which serves as a solid lithium electrolyte, by adding lithium salts to Mg2(dobdc) (dobdc = 1,4-dioxido-2,5-benzenedicarboxylate), a common MOF, followed by soaking in a mixture of ethylene carbonate and diethyl carbonate. The researchers claim that the presence of coordinatively unsaturated Mg2+ cation sites in the MOFs facilitates the uptake of a lithium alkoxide, leading to higher ionic conductivity: The alkoxide anions preferentially bind the Mg2+ ions, allowing the Li+ cations to freely move along the MOFs’ one-dimensional channels.