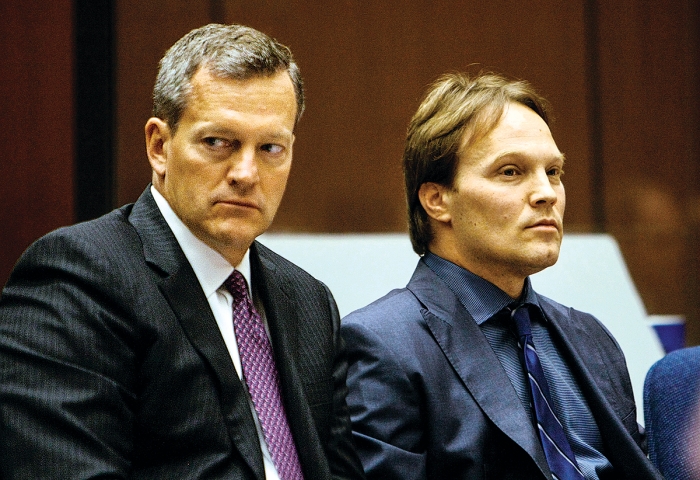 To see reactions to the settlement, visit http://cenm.ag/rxnstoharran.

Harran was charged with four felony violations of the state labor code. The case originated from a 2008 fire in his lab that led to the death of research assistant Sheharbano (Sheri) Sangji.

The deal mandates that Harran complete multiple forms of community service and pay a $10,000 fine. The charges were not dismissed. Instead, the case against Harran is effectively on hold while he completes the terms of the five-year agreement.

In a written statement released after the hearing, Sangji’s sister, Naveen Sangji, called the agreement “barely a slap on the wrist.” Harran had faced up to four-and-a-half years in prison.

In court, Harran read a statement, saying he was “ultimately responsible” for the safety of people working in his lab. “I have always felt I failed Sheri, and I deeply mourn her loss,” he said.

The case against Harran started on Dec. 27, 2011, when the district attorney’s (DA’s) office filed charges against him and the UC governing body. The DA’s office didn’t negotiate a deal with Harran until after his preliminary hearing to ensure there was a public record of what happened in the accident, Deputy DA Craig W. Hum says.

As part of the community service mandated by the agreement, Harran must develop and teach an organic or general chemistry course for South Central Scholars, a volunteer organization that helps prepare Los Angeles inner-city students for college and graduate school.

The DA’s office worked with the organization to put together a project that would be “enough of a drain on Harran’s time and energy to be a significant punishment while giving a huge benefit to the organization,” Hum says.

Harran must also complete 800 hours of community service in the UCLA Hospital System. This service cannot involve teaching and could include jobs such as delivering food to patients. “We wanted him to do something outside of his comfort zone,” Hum says.

Additionally, the agreement requires that Harran talk with UCLA chemistry and biology undergraduate students about laboratory safety. The agreement didn’t include other safety outreach because the DA’s office believed that the case itself brought sufficient attention to safety concerns, Hum says.

The DA’s office and the California Division of Occupational Safety & Health will monitor Harran’s compliance with the agreement. If they think that Harran isn’t meeting the requirements and a judge agrees, the case will proceed to trial. Judge George G. Lomeli stressed this part of the agreement in court: Harran “will be given one chance to get this right.”

At the end of the five-year term, if Harran meets his obligations, the DA’s office will move to dismiss all charges against him and will not pursue any further prosecution.

Overall, Hum says he understands the Sangji family’s position that the agreement is inadequate. But he also thinks that the settlement is likely close to any sentence that Harran might have received had he been convicted. “There was no way that any judge was going to punish him by sending him to jail,” Hum says.

Comments
Wilfredo Mangual (July 7, 2014 1:41 PM)
Awful! In the real world( and a laboratory research is the real world) all of us are responsible for our own safety and it cannot be delegated to someone else, regardless of the circumstances. The work environment provides the necessary basic safety tools and instructions for individuals to follow, but if these individuals decide to do something that jeopardizes their well being, unless he/she is caught in the act it is impossible to stop. Furthermore, the tech represented herself as having the knowledge to complete this task and other similar ones. I am sorry the act cost her life, that is very sad indeed, but to punish the Dr. Harran as if it was his doing is also wrong. No one, whether in a lab setting or in the private sector is able to " build" a protective bubble around an individual to protect them from harm. Obviously this was dangerous work but not unsafe, it has been done many times.
Reply »