MEDICAL MESSAGING
Credit: GSK
Bioelectronics proposes a class of therapies that are not pills or injections but miniaturized implantable devices. As shown in this video, these devices would be designed to read and correct electrical signals that pass along the nerves of the body and are associated with a range of diseases, such as inflammatory bowel disease, arthritis, asthma, hypertension, and diabetes.

In one vision of the future, some diseases are treated by traditional pharmaceuticals, but others are managed with tiny devices that modulate electrical signals in the body. These bioelectronic medicines would be similar to the neurostimulators now used to control heart rhythms, epilepsy, and pain but offer better clinical insight and more precise neural control.

The dream is that nanoscale implantable devices can close the therapeutic loop by measuring conditions, analyzing data, and adjusting bioelectronic therapies as needed. Some devices could test blood sugar to determine insulin needs and prompt its production. Others might regulate breathing in asthma or cytokine output in inflammation.

GlaxoSmithKline, the big British drug company, is leading the charge into bioelectronics, but academics, venture capitalists, and start-ups also see electricity muscling out pills in the future.

It’s too early to close the chemistry lab, however. “We see this as a one- to two-decade journey toward a new class of medicines rather than a product that will come to market in the next few years,” says Kristoffer Famm, head of bioelectronics R&D at GSK. 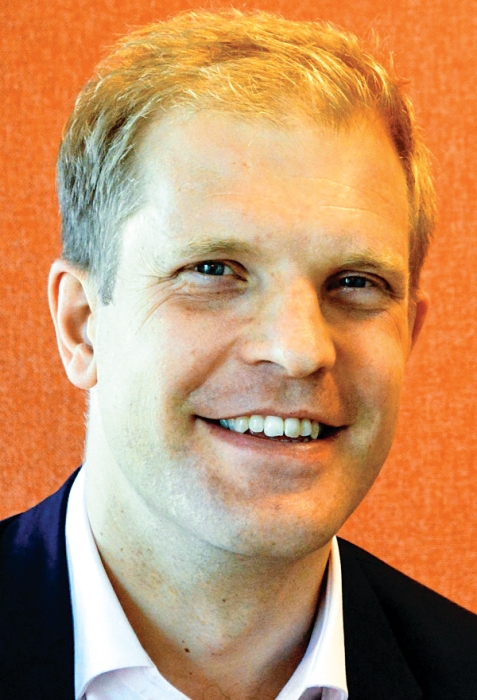 Although the field is new, researchers across disciplines “are starting to pivot toward this area,” Famm says. To encourage and coordinate researchers’ activities, GSK launched a bioelectronics initiative just more than a year ago to support exploratory research and invest in start-up businesses.

GSK’s effort “was pretty much the first major initiative within this space,” says Milos Todorovic, a medical devices analyst at Boston-based Lux Research. “Most of the research is being done in university labs, and not so much in the industry itself.”

Famm says he’s encouraged by emerging interest on the part of funding agencies. In 2013, the National Institutes of Health started BRAIN, an acronym for the Brain Research through Advancing Innovative Neurotechnologies Initiative. For its next fiscal year, NIH is considering a bioelectronic medicines project.

Meanwhile, GSK is funding about 15 investigations, predominantly academic, into disease biology and neural signaling. For each, it generally supports up to two full-time researchers for 12 months. Already GSK has found “some attractive hypotheses and some early experimental data of how you can use the nervous system to modulate organ function and potentially treat disease,” Famm says.

Target areas include metabolic, immune-inflammatory, respiratory, cardiovascular, and urinary diseases. Researchers are looking for therapeutic feasibility and for disease signatures—correlations between neural signals and markers of organ function and disease. The focus is on peripheral nerves in the viscera, or those close to organs centered in disease, Famm says.

Another 10 or so GSK-funded collaborations are exploring ways to interact with those nerves. Famm and others believe that nanotech and optical approaches for neural interfacing will be important in first-generation devices. Academic nano- and neuroscientists recently described nanoscale analysis tools and materials that have yielded useful optical, electrical, and chemical methods (ACS Nano 2013, DOI: 10.1021/nn4012847).

TAPPED IN
[+]Enlarge
Credit: GlaxoSmithKline
An optical device around a nerve bundle, as depicted here, could possibly excite fluorescent nanoparticles. 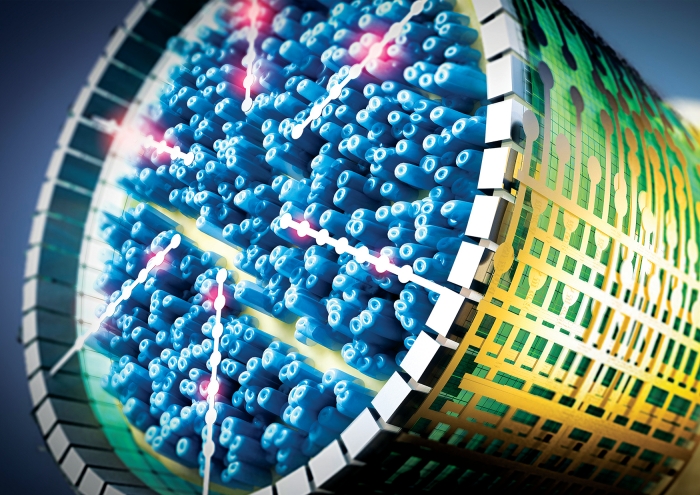 Last December, in an effort to spark interaction, GSK sponsored a conference at which about 150 scientists shared findings. “The engineers and biologists are starting to problem-solve together and talk the same language,” Famm says. A research road map also grew out of the meeting (Nat. Rev. Drug Discovery 2014, DOI: 10.1038/nrd4351). Another meeting this month will review progress and, Famm hopes, present more collaboration and funding opportunities.

At the meeting, researchers also identified a major research challenge. They agreed on the need to create a “visceral nerve interrogator,” an implantable device that can be used in rodent models to record, stimulate, and block neural signals to a given organ. GSK is offering a $1 million prize for the solution.

“The task is quite multidisciplinary,” Famm says. “Teams are starting to come together now, but it’s going to take another year or two before the challenge is solved.”

Such a device would serve as a research tool and also have therapeutic potential, according to Imran Eba, a partner at Action Potential Venture Capital, a bioelectronics-focused investment fund that GSK set up last year. Accordingly, the $50 million fund is looking for innovators moving in this direction.

So far, Action Potential has invested in just a handful of firms. One early-stage company is working on device development; another is looking at disease biology and therapy. “We can invest in the range of $1 million to get from idea to early proof of concept,” Eba says. Action Potential also funds start-ups developing underpinning technologies. These run the gamut of materials, electronics, energy sources, wireless transfer, and surgical techniques.

A venture capital firm can’t wait decades for bioelectronic medicines to materialize, so Eba seeks related opportunities with a payout in five to seven years. These investments may be in existing firms with devices that interact with the peripheral nervous system through first-generation technologies but that also may work at new intervention points or in new disease areas. Helping such firms navigate clinical, regulatory, and commercial paths could aid later bioelectronic medicines.

Action Potential’s first investment was in SetPoint Medical, based in Valencia, Calif. The seven-year-old firm is trying to treat inflammatory diseases, such as rheumatoid arthritis and inflammatory bowel disease, by stimulating the vagus nerve, a major nerve that runs from the brain to the viscera. It licensed technology from the lab of Kevin J. Tracey, chief executive officer of Feinstein Institute for Medical Research in Manhasset, N.Y., and a SetPoint founder.

Tracey and coworkers discovered the inflammatory reflex, a neurophysiological mechanism through which the nervous system senses infection or injury and then regulates the immune system. If signals in the regulatory circuit are disrupted, too many immune cells are produced and inflammation results. By reproducing the signal, more normal levels can be restored across the board, whereas drug therapies often inhibit just one inflammation-related cytokine, SetPoint CEO Anthony Arnold explains.

“We understand the pathway pretty well, but we don’t have the ability to selectively target nerve fibers,” he says about progress to date. “Ultimately that’s where we and GSK would love to go.” Since the vagus nerve can also be stimulated to manage heart conditions and epilepsy, SetPoint has learned where and how much to trigger it to get the desired immune response.

Bioelectronic medicines differ from classical neuromodulation methods, even new ones being used to restore sight, explains Arnold, who has spent 20 years in the medical devices field. In neuromodulation, a patient experiences the desired effect only when the device is on. In bioelectronics, a signal is applied, then turned off. “The effect lasts for days, and that’s more like a drug,” he adds.

Arnold is excited about the prospects for therapies that are as effective as drugs but may be less expensive and avoid some side effects. Current drugs for rheumatoid arthritis average about $30,000 per patient per year. He estimates that a bioelectronic device, including the surgery to install it, would cost $40,000 to $50,000 and last for 10 years.

To conduct preclinical and initial human studies, SetPoint scientists modified an existing neuromodulation device. They wanted proof of concept before investing further in technology, Arnold says. Now, having raised $27 million last year from GSK and firms such as the medical device makers Boston Scientific and Covidien, SetPoint is building its own device for more advanced clinical trials.

SetPoint is among the lucky ones, because investment in medical devices has been declining. After investment peaked in 2007 at $3.7 billion, venture capital investors put just $2.1 billion into device companies in 2013, according to PricewaterhouseCoopers and the National Venture Capital Association.

Since opening its doors, Action Potential has seen a “steady stream” of inventors and start-ups interested in funding, Eba says. “I don’t think we appreciated just how tough the financial environment is for devices.”

A few other large pharma companies are supporting device developers. In 2013, Johnson & Johnson’s venture capital fund was among investors that put $30 million into Minneapolis-based CVRx. The firm is using the money to support clinical trials and commercial activities for its Barostim Neo. The implantable device signals cells on the carotid artery that in turn tell the brain to activate the body’s cardiovascular regulation system. CVRx is testing it for treating heart failure and hypertension.

In late 2013, Boehringer Ingelheim set up a three-year collaboration with Circuit Therapeutics of Menlo Park, Calif. The partners are looking for new ways to treat psychiatric disorders by understanding disease neurobiology and maladaptive brain circuitry.

Circuit’s core technology is optogenetics, which involves genetically introducing light-sensitive proteins, or opsins, into electrically responsive cells, such as neurons. When light hits the opsins, they generate an electrical current that can modulate cell activity. This specific control of nerve cells and circuits lets researchers characterize their function and then design drugs or other interventions.

Modulating neural signals for therapeutic purposes is still very speculative, cautions Lux’s Todorovic. “The general consensus is that this market is going to grow significantly, but that growth is going to be slow initially because the underlying causes for a lot of these disorders and diseases are still poorly understood,” he says. And hurdles around implanting and operating bioelectronic devices may arise down the road.

GSK’s Famm sees current efforts as “the first step of probably a five-year effort in mapping the innervation of visceral organs and understanding exactly what nerve is dedicated to what organ and what function is controlled by what nerve.”

Once scientists construct this critical map of structure and function, he says, “we will have a very rich base from which to generate therapeutic interventions for a whole host of diseases.”