THE FIRST LEG
Credit: CBS
In this CBS clip, DeJong and Warren debrief after their first day in the race, which took them from New York to the U.S. Virgin Islands.

“It’s a lot harder than it looks,” says Amy DeJong about the reality TV program “The Amazing Race.”

DeJong and fellow University of Wisconsin, Madison, food science graduate student Maya Warren competed in the race earlier this year. The show, now in its 25th season, pits 11 two-member teams against each other as they follow clues and confront a series of challenges that take place across the globe. The winning team gets $1 million.

The show is airing episodes from DeJong and Warren’s race now. As of C&EN press time, the team had weathered the first three sets of challenges, which included finding a treasure chest in the U.S. Virgin Islands, stepping through the drills of British palace guards in England, and herding sheep in Scotland.

A longtime fan of the show, Warren instigated the food science duo’s participation in the race. She got her bachelor’s degree in chemistry from Carleton College, then interned for a cereal company before starting graduate studies. Cereal grain was not her thing, she says, but she found her passion at Wisconsin. “I told myself that I was going to find what it is that I love, and I really love ice cream,” she says. “Now, I dissect ice cream.” Her graduate work with adviser Richard W. Hartel focuses on understanding the microstructure behavior, such as how fat globules coalesce, and sensorial properties of frozen desserts (J. Food Sci. 2014, DOI: 10.1111/1750-3841.12592). 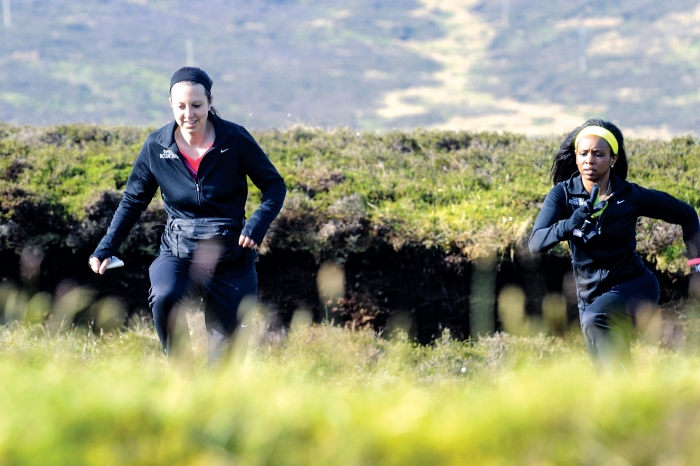 Credit: Heather Wines/CBS
In Scotland, DeJong (left) and Warren race to cut peat and deliver it by Shetland pony in order to get their next clue.

A year ago, Warren discovered that the show was having an open audition in Chicago. She talked DeJong into trying out with her. They had one minute to convince the judges to let them advance.

“It’s so very surreal,” DeJong says. “I still can’t even believe that we did it.” Also a member of Hartel’s group, DeJong got her bachelor’s degree in food science at Wisconsin. “What drew me into food sciences is that there are a lot of different sciences that combine to understand something that people can relate to—everybody can relate to food,” she says. Now she’s working to understand different crystal polymorphs of sorbitol, a sugar alcohol used as a sweetener in products such as toothpaste, chewing gum, and fondants.

The attraction of “The Amazing Race” to both DeJong and Warren was the challenge. “It was a unique way to prove ourselves outside of the lab,” DeJong says.

To prepare for the race, the #SweetScientists—as they’re known on Twitter—worked out twice a day for about six months. Because “The Amazing Race” challenges are so varied, they tried to mix things up and do things that were outside of their comfort zone and learn new skills. Warren taught DeJong how to drive a manual transmission, for example. DeJong also learned to use a compass, which came in handy with the treasure-hunting challenge.

“We also spent quite a bit of time talking to each other to learn about each other outside of lab,” Warren says. “We tried to learn each other’s stress and pressure points.”

Going into the race, DeJong and Warren thought that their science backgrounds would help them figure out clues, analyze how best to do a challenge, and stay cool under pressure. At the same time, they have a tendency to overthink. How did that turn out? Watch the show, they say.

That’s what they’re doing. “It’s been strange to see us on TV and funny to relive the whole experience and see what everybody else was doing while you were focused on yourself,” DeJong says.

“I really enjoy watching it with people and have people getting excited for us,” Warren says. (Their adviser, however, is not among the viewers. Although DeJong and Warren call him incredibly supportive, he’s “not a reality TV fan,” he tells C&EN.)

Returning to the lab after the race was a bit tough, the team admits. “For me it was quite difficult to go back to the regular routine,” Warren says. “You have an adrenaline high for so long, then you get back home and say, ‘Now what do I do?’ ”

“In the race, you have a really intense focus for the hours it takes you to do a challenge,” DeJong adds. “It doesn’t quite work that way in research.”

Now that they are back in the groove, DeJong and Warren are glad they took the leap. Says Warren, “It was the opportunity of a lifetime and a priceless thrill.”

Chemical Communication
Sweet-smelling study aids, and why stinky plastic is a trap for turtles
Food
A chemist enters a popular TV baking competition, and a cat food discovery
K–12 Education
Video: Spending a summer with ACS Project SEED
Share X
To send an e-mail to multiple recipients, separate e-mail addresses with a comma, semicolon, or both.
Title: C&EN Talks With "The Amazing Race" Team Of Amy DeJong And Maya Warren
Author: Jyllian Kemsley
Chemical & Engineering News will not share your email address with any other person or company.