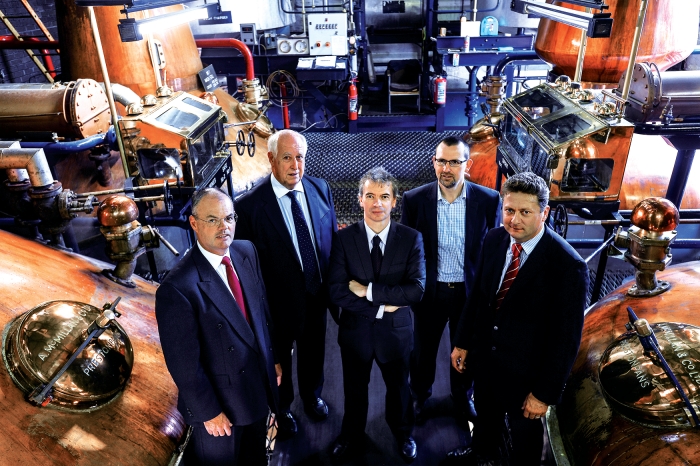 The process for making Scotch whisky uses three ingredients: water, yeast, and a grain, primarily barley. About 10% of the output is spirits, and the rest is by-products.

Those spirits can’t be called Scotch whisky until they age in oak casks—in Scotland—for at least three years. The by-products are residual solids called draff and a yeasty, copper-contaminated liquid known as pot ale. They are usually spread on agricultural fields, turned into low-grade animal feed, or discharged into the sea.

The Scottish start-up Celtic Renewables is looking to take draff, pot ale, and its own microbe to produce acetone, 1-butanol, and ethanol. Along the way, the small company hopes to revitalize the once widely used ABE fermentation process, so-named after the three chemicals it makes.

Draff and pot ale “have no commercial value, and in the modern context they represent a disposal issue,” says Martin Tangney, founder, president, and chief scientific officer of the Edinburgh-based firm. Looking to address local Scottish and other U.K. targets for waste reduction and increased biofuel use, he sees an opportunity to “use what you have in abundance.”

In 2013, Scotch whisky exports were worth about $7 billion, according to the Scotch Whisky Association. The drink accounted for 85% of Scotland’s food and beverage exports, and a quarter of the U.K.’s. At the same time, the industry generates about 1.6 billion L of pot ale and more than 500,000 metric tons of draff each year.

“Whisky is iconic and synonymous with Scotland,” Tangney says. The process for making it is dictated by tradition and by law. As a result, distillers are “always going to make it the same way, and what they need to do is innovate on how they can make a sustainable industry.”

In 2007, Tangney left the enzyme industry to set up the Biofuel Research Centre at Edinburgh Napier University. He remains its director. After working for a few years under a Scottish proof-of-concept grant on the ABE process and a business plan, Tangney founded Celtic Renewables in 2011.

The ABE process was once one of the largest industrial-scale fermentations practiced. Renowned scientist and Israeli statesman Chaim Weizmann discovered how to use anaerobic Clostridium acetobutylicum to convert molasses and other sugars into chemicals needed during World War I. But by the 1960s, the process had largely died out, unable to compete with advancing petrochemical production, according to Ronald F. Cascone, a principal with the consulting firm Nexant.

The issue today is getting the economics right for a technology already proven to work at large scale, Tangney asserts. “What we’re doing differently is using an entirely new raw material.” It’s a raw material, he adds, that can also be found in other whisky-producing countries and in related industries such as brewing.

Up to 90% of the front-end cost of making a biofuel can be the raw materials, especially when relying on commercial crops such as corn, Tangney explains. “In our case, the raw material comes basically cost neutral to us and has already been partially processed.” Because the end products are expected to have value, he says, all Celtic Renewables has to do is operate the ABE process cost-effectively to net a profit.

The firm will treat the partially hydrolyzed sugar-rich draff to release as much usable carbon as possible. The pot ale supplies the water needed to run the fermentation. Besides the three chemicals, the ABE process yields protein-containing solids that can be turned into a high-grade animal feed.

“On one hand, we’re a fuel production company, but on the other, we’re a waste management company,” Tangney says.

The company has been refining its process and will soon move beyond the several-liter bench scale. In June, it agreed to work with the government-backed Bio Base Europe Pilot Plant in Ghent, Belgium, to approach industrial levels.

To help fund the scale-up, Celtic Renewables has obtained about $1.3 million from the U.K. Department of Energy & Climate Change and $660,000 in private equity. Raw material will come from Tullibardine Distillery, which spends $400,000 per year to discard up to 6,500 metric tons of draff and 2 million L of pot ale.

“We’ll be working at 1,000-fold where we were before, so it’s a huge jump,” Tangney says. If successful at the larger scale, Celtic Renewables’ next step will be to draw up plans for a commercial facility in Scotland and seek help from a $40 million U.K. Department for Transport biofuels plant development fund.

Celtic Renewables isn’t the only company targeting biobutanol, which is attractive as a biofuel and in chemical markets. Butanol has 25% more energy per unit volume than ethanol and can be burned in unmodified engines at higher levels. It can be blended into gasoline and diesel in existing facilities. And, when burned, it boasts very low greenhouse gas emissions.

Competitors include Gevo and Butamax, a BP-DuPont joint venture, but both make isobutyl alcohol, not the 1-butanol that comes from the ABE process. More direct competition comes from Green Biologics and Cobalt Technologies, which both use Clostridium-based approaches. In 2011, Eastman Chemical acquired similarly focused TetraVitae Bioscience, but little has happened since, according to Nexant’s Cascone.

ABE is a “good technology,” but purifying the products is challenging and expensive, he says. “You have solids, you have water, and you have acetone and two alcohols. It’s a messy separation.” Developers rely on methods such as distillation and pervaporation, a combination of membrane permeation and evaporation.

Most producers are counting on selling biobutanol as a gasoline or diesel blend stock, but Cascone thinks firms making 1-butanol will look elsewhere. “There is a much better chance that the ABE route could be more competitive in the chemicals market,” he says, “where 1-butanol has twice the price.”

Tangney sees Celtic Renewables playing an even different role. “I looked to see where we could develop the ABE fermentation and do something that would set us aside from bigger organizations that we simply can’t compete with,” he says. Handling the waste issues of the local whisky industry is part of that, but he also sees opportunities to solve problems in isolated or rural areas.

For example, the remote western Scottish island of Islay houses several distilleries. “It’s difficult getting fuel on and off the island, and the winters can be harsh,” Tangney says. “We’re talking to the Islay Energy Trust about locating a plant there at some point in time to take locally generated residues and convert them to fuel that can be used on the island.”

This kind of stakeholder support is an important part of Tangney’s vision for Celtic Renewables. “We’ve got goodwill and faith,” he says, “and support and backing from people who want this to work.”

Business
LanzaTech To Make Ethanol From Waste Gas In Europe
Business
Green Biologics Pursues A Biobased Meeting Of The Minds
Business
Seeking A Home For PaperMaking Waste
Share X
To send an e-mail to multiple recipients, separate e-mail addresses with a comma, semicolon, or both.
Title: Celtic Renewables Opts For A Well-Oiled Remedy
Author: Ann M. Thayer
Chemical & Engineering News will not share your email address with any other person or company.

Comments
Duncan Fisher (March 5, 2015 2:00 PM)
Fantastic piece of news and hope. A waste product whose reprocessing is being pioneered in Scotland makes for very enlightening (and inspiring) reading.
Reply »