Companies see an opportunity to move their agenda in Congress

BATTLEGROUND
[+]Enlarge
Credit: Shutterstock
Thirty-six Senate seats are up for grabs in November. 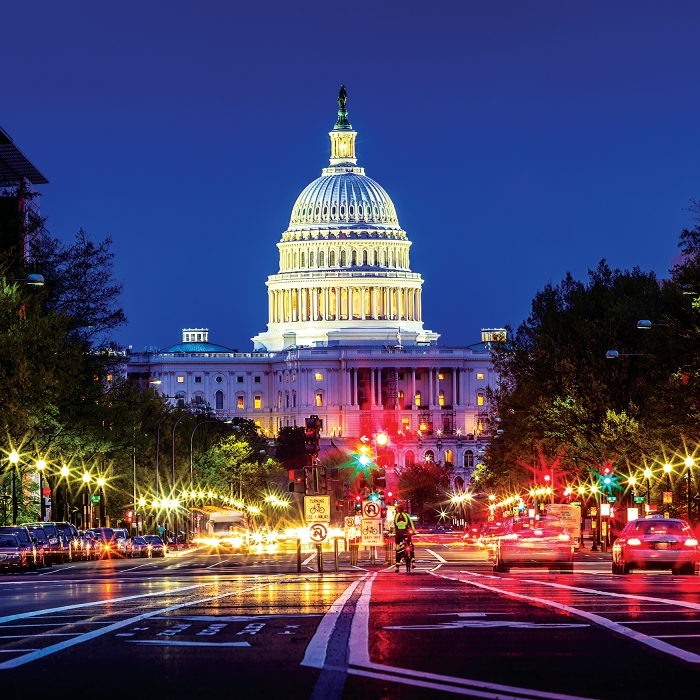 Credit: Shutterstock
Thirty-six Senate seats are up for grabs in November.

As the battle for control of the U.S. Senate enters its final two weeks, the country’s top political forecasters are still pointing to a likely, but narrow, Republican takeover in the midterm elections.

The prospect of a GOP Senate majority delights the chemical industry’s lobbying organizations in Washington, D.C.

If the party wins control of the Senate and maintains its majority in the House of Representatives, the industry will be in a stronger position to help move legislation through Congress, says William E. Allmond IV, vice president of government and public relations at the Society of Chemical Manufacturers & Affiliates. The trade group represents 220 mostly small specialty chemical makers.

“What a Republican-controlled Congress would do for the industry’s advocacy agenda is give us certainty that we can actually make progress on issues like reforming the Toxic Substances Control Act (TSCA) and passing trade legislation,” he remarks. “I think we would see those issues get addressed rather quickly.

“We’ve seen that a divided Congress simply does not work in terms of being able to address the major issues that face our industry,” Allmond adds.

With Republicans poised to keep their majority in the House, attention has focused on the Senate, where Republicans need a net gain of six seats to take control. Democrats currently hold a 55-45 advantage but face a difficult midterm landscape.

Not surprisingly, the chemical industry’s political spending during the 2014 election cycle has heavily tilted toward Republicans with 76% of its campaign contributions going to GOP candidates and only 24% supporting Democrats.

Companies that make chemicals and related products, such as plastics and specialty coatings, have contributed nearly $10 million to congressional candidates, political parties, and outside spending groups in the 2014 election cycle, according to the Center for Responsive Politics. That nonpartisan, nonprofit group tracks campaign spending.

Chemical manufacturers are especially hopeful that a change in Senate leadership will lead to passage of legislation to accomplish the industry’s current main objective on Capitol Hill: an overhaul of TSCA, the federal law that governs the production of commercial chemicals.

TSCA is virtually unchanged since it was signed in 1976. Industry, labor, environmental groups, and health organizations agree that the statute needs to be updated to reflect advances in science and technology. But lawmakers have struggled to reach consensus on how to modernize the federal chemical regulatory system.

Over the past 18 months, Sen. David Vitter of Louisiana, the top Republican on the Senate Environment & Public Works Committee, has worked with Sen. Tom Udall (D-N.M.) to develop bipartisan TSCA reform legislation. Last month, they were close to unveiling a revised version of the Chemical Safety Improvement Act (S. 1009). The initial version of the bill was introduced last year.

But the senators decided not to release their draft after Sen. Barbara Boxer (D-Calif.), the committee chair, charged that the proposal would nullify many health protections that California and other states have enacted on their own. Under the Vitter-Udall bill, Boxer said, states “face sweeping preemption even when there is no meaningful action by the federal government.”

The chemical industry wants one set of rules, rather than a patchwork of different state regulations. “We know that consumers are looking for more confidence in chemical regulation at the federal level,” says Anne Kolton, vice president of communications at the (ACC), the industry’s largest trade association and a major lobbying force. But several states, including California and New York, strongly oppose TSCA reform legislation that preempts their chemical laws, a position backed by environmental and health groups.

Sen. James Inhofe (R-Okla.), who would head the committee if the Senate changes hands, has been supportive of the effort to draft a bipartisan TSCA bill and is a cosponsor of S. 1009. The legislation has been endorsed by 26 senators—an even split of 13 Republicans and 13 Democrats.

“We expect that TSCA reform would be near the top of Sen. Inhofe’s agenda next year,” Kolton says. Without Boxer wielding the chairman’s gavel, Kolton says, “there really is no reason why it couldn’t move fairly easily through committee.”

The chemical industry efforts to shape the debate through political spending have been criticized by some watchdog groups. “ACC’s pumped-up political advertising spending, campaign contributions, and lobbying dollars make it impossible for new chemical regulations to pass without its approval,” says Melanie Sloan, executive director of Citizens for Responsibility & Ethics in Washington.

Kolton doesn’t apologize for the aggressive advocacy. “We are one of the fundamental industries in the U.S., and we need to make sure there are policies in place that help our members and the manufacturing sector as a whole grow and thrive,” she says.

Another industry priority that could advance in a Republican-led Senate is trade promotion authority (TPA), which would allow the White House to fast-track trade deals in Congress. Under the authority, which expired in 2007, the President is allowed to submit trade agreements to the House and the Senate for up-or-down votes without lawmakers amending the deals.

The Obama Administration wants Congress to renew TPA as it tries to complete two huge new pacts—the Trans-Pacific Partnership with 11 Pacific Rim countries and the Transatlantic Trade & Investment Partnership with the European Union.

Chemical manufacturers and other businesses eager to boost their exports support the deals, as do trade-friendly Republicans. But Senate Majority Leader Harry Reid (D-Nev.) has refused to hold a vote on the issue, reflecting opposition by unions and environmental groups. They worry that the trade agreements would lead to lost jobs and weaker labor and pollution standards.

“Sen. Reid has been the big obstacle on TPA legislation,” Allmond says. “I believe a Republican Senate majority leader would make this a priority. We’re confident that this issue would be addressed quickly and it would get a lot of support from Republicans as well as some Democrats.”

The challenge for Democrats in this election is defending many Senate seats in very Republican states, says Charles E. Cook Jr., editor and of the Cook Political Report, which provides nonpartisan analysis of U.S. elections. “Republicans don’t necessarily need a wave to win a majority. They just need red states to stay red,” he says.

Of the 36 Senate races on the ballot, Democrats are fighting to hold 21 of those seats, including seven in states that GOP presidential nominee Mitt Romney took in the 2012 election. Six of those seven are states Romney carried by at least 14 points.

One of the most vulnerable Democratic seats belongs to Sen. Mary L. Landrieu of Louisiana, who is trying to stave off a challenge from Rep. Bill Cassidy (R-La.). Despite the chemical industry’s desire for a Republican-led Senate, it’s doing everything it can to help win a fourth term for Landrieu, a strong ally in a state where chemical manufacturing has a huge footprint. Federal Election Commission data show that Landrieu ranks as the second-largest recipient of chemical industry campaign cash in the current election cycle ($138,252), trailing only Senate Minority Leader Mitch McConnell (R) of Kentucky ($146,475).

“Given that we are one of the largest employers in Louisiana, we have a close relationship with Sen. Landrieu. She’s been a longtime champion of the industry,” Kolton says. “She has been there for us on energy policy and on TSCA reform. And it’s important to stick by your friends.”

In addition to contributing to Landrieu’s campaign, ACC has also bought television ads in major Louisiana media markets telling voters that “Mary Landrieu is a proven leader who brings both sides together to get results.”

Cassidy, a physician, has focused mostly on health care issues since he was elected to the House in 2009. “That’s not to say he would oppose our agenda,” Allmond says. “But his position on key industry issues is still somewhat of an unknown.” On the other hand, Landrieu has been a “vocal supporter of small-business issues and her work on behalf of smaller chemical manufacturers has been very helpful,” Allmond tells C&EN.

With tight races expected in a handful of states, it’s not implausible that control of the Senate could come down to Louisiana. But the chemical industry is staying with the centrist Democrat.

“There’s no question that we would prefer to see a change in leadership in the Senate,” Kolton says. “But when you get down to individual races, there are more things to consider. Mary Landrieu has been a strong supporter of the chemical industry, so we’re going to continue to support her. We work hard to establish strong relationships, and we work hard to preserve them.”

Allmond acknowledges that backing a pro-business Democrat such as Sen. Landrieu “could help ensure that Congress remains divided” because Republicans may need to capture her seat to flip control of the Senate. “But in this town,” he stresses, “it’s all about relationships and trying to remain loyal to the folks that have been supportive of your issues.”