Nanovessel Host Leads To Retention Of Configuration In SN2 Reaction

This SN2 reaction proceeds with stereochemical retention inside a nanovessel host.

A change to the canon of organic chemistry appears to be in order. Chemists at the University of California, Berkeley, report an SN2 reaction that proceeds with retention of stereochemical configuration (J. Am. Chem. Soc. 2014, DOI: 10.1021/ja508799p). The reaction takes place within an organogallium host. 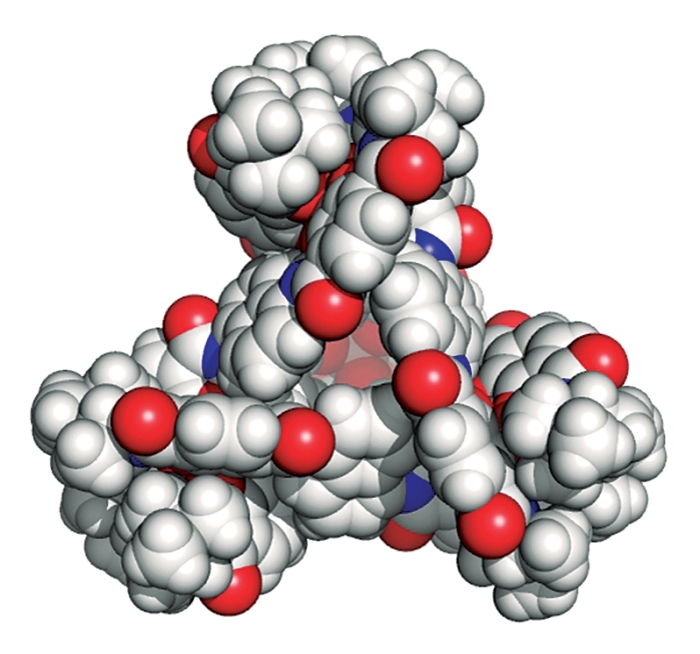 Students of organic chemistry learn early on that SN2 reactions are characterized by inversion of stereochemical configuration. The incoming nucleophile displaces the leaving group on a carbon atom through a so-called backside attack that flips the arrangement of the carbon’s three other substituents. It’s akin to an umbrella becoming inverted by a strong gust of wind.

Chen Zhao, F. Dean Toste, Kenneth N. Raymond, and Robert G. Bergman discovered they could make the reaction proceed with stereochemical retention quite by accident. They’d come across a clever way of making single diastereomers of so-called nanovessel hosts and hoped to use them in asymmetric reactions. But when they tried to use the nanovessel for a substitution reaction on a racemic mixture of a benzylic substrate with the hope of getting primarily one enantiomer of product, their results were disappointing.

So, they looked at what happened when they did the same reaction on a single enantiomer of the benzylic substrate. Much to their surprise, the reaction proceeded with up to 90% retention of stereochemical configuration.

“We think that what we’re seeing is a kind of double inversion,” Bergman explains. As the leaving group departs, the π-electrons from one of the naphthalene groups that make up the nanovessel’s walls interact with the backside of the developing carbocation in the benzylic substrate. This sort of interaction has been observed before with neighboring groups within a substrate molecule but never intermolecularly.

“This paper is a great combination of good, old-fashioned sleuthing applied to the frontiers area of supramolecular host-guest catalysis,” comments Ryan A. Shenvi, an organic chemist at Scripps Research Institute, in La Jolla, Calif., who has also tinkered with the canon of SN2 reactions. “It’s easy to imagine many more discoveries snowballing from this single observation,” he says.

INSIDE THE HOST
See what it's like to be the guest molecule inside the UC-Berkeley group's host complex.
UC Berkeley

Comments
Anonymous (October 17, 2014 11:52 AM)
If we were trying to classify this by one of the two classic substitution reactivity modes, wouldn't this be more of an Sn1 reaction rather than an Sn2?
Reply »

Gregg (October 17, 2014 12:01 PM)
An Sn2 reaction requires that both the nucleophile and the electrophile are part of the rate law. Also, from a mechanistic standpoint, it means that a discreet carbocation is not generated. For the first point, no kinetics data is presented in the paper, so there is no rate law to support Sn2. Second, the author's own mechanistic proposal invokes a stabilized carbocation-like intermediate, so wouldn't this be more Sn1 than Sn2? Why are we calling it Sn2 here?
Reply »

Bethany Halford (October 27, 2014 2:30 PM)
I asked the authors to respond to the above comments. Here's what Bob Bergman had to say:

"I think the commentators have a good point. Gregg is correct that there
are no kinetic data on the displacement itself, so if you believe that
the terms SN2 and SN1 should be used only for reactions that show
demonstrably second- and first-order kinetics, our reaction, strictly
speaking, meets neither of those criteria. However, most chemists would
use the term SN1 to describe a simple ionization reaction, and SN2 to
describe a concerted backside displacement of a leaving group by an
entering nucleophile. Our reaction does not really fit either of
these criteria, and that is why we decided to refer to it by using the
term nucleophilic substitution, rather than an overall SN2 reaction, in
the paper, although the proposed mechanism has SN2 character in the two
displacement steps that we are proposing to account for the overall
retention stereochemistry. In the sentence at the bottom of p. 14410
col. 1, the term SN2 is meant to refer to the benzyl solvolysis in bulk
solution, and how that changes when the reaction takes place in the
nanovessel cavity. Bottom line: it would have been better if we had
asked C&EN to change the reaction descriptor to fit the wording used in
the paper more closely."