No new coal-fired electricity plants started up in the U.S. during the first half of 2014

Most new U.S. power plants that came on-line in the first half of 2014 are fueled by natural gas or solar energy, according to a study from the federal Energy Information Administration.

No new coal-fired power plants started up during the same period, says April Lee, an EIA industrial economist who conducted the study. 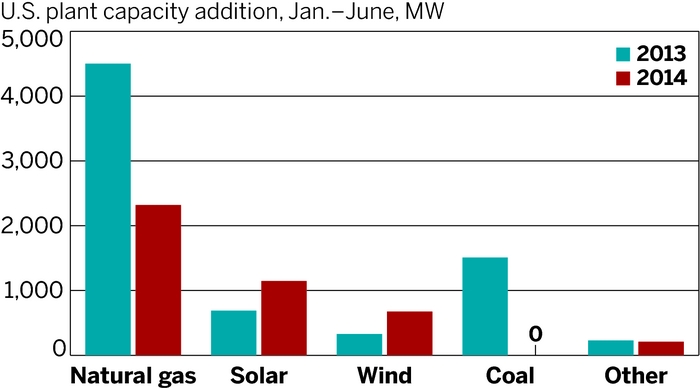 The number of new coal plants has declined sharply from the past because of increasing competition from natural gas and solar, she says. These latter two energy sources have seen their costs fall in recent years. At the same time, coal-fired facilities face impending, expensive environmental regulations that will reduce air pollution and carbon dioxide emissions.

Some 4,350 MW of new electrical power plant capacity was installed during the first six months of 2014, accoding to the study by EIA, an independent research arm of the Department of Energy. Natural-gas-powered facilities accounted for about half of that and another one-quarter was solar installations. Wind installations were about one-eighth of the total.

The study shows a continuing trend toward greater U.S. dependence on natural gas, with a steady increase from previous years.

This growth is the result of both state requirements that force electric utilities to purchase renewable energy and the declining costs of solar panels, Lee says. To meet the state requirements, utilities have turned to large solar fields rather than encourage construction of small, kilowatt-sized, rooftop solar installations.

About three-quarters of solar installations put on-line in the first half of the year were in California and were utility-scale solar-concentrating and photovoltaic solar fields. These large solar installations have helped spur a drop in solar panel prices, making solar more economically competitive with other forms of electricity generation, Lee says. She points to a recent electricity purchase by Austin Energy, a utility in Austin, Texas, in which solar-generated electricity was 5 cents per kWh, making solar the utility’s cheapest source of electricity.

The installations for the first half of the year also show a strong preference for large, highly efficient combined-cycle natural gas power plants.

Despite the decline in new coal facilities, coal-fired power plants of all ages still produce the largest share of U.S. electricity, about 40%. The past two years, however, have been rough for new coal facilities. Two plants were expected to begin operation in 2013, but the openings of both are delayed, Lee says. One, in Texas, is a traditional power plant stalled by equipment failures. The other is an Indiana coal gasification facility experiencing difficulties with the application of gasification technology to electricity generation.

Nonetheless, by year’s end, Lee said, a small North Dakota coal power plant will come on-line and next year, the long-delayed Kemper gasification plant in Mississippi is to begin operation.

Overall, the trend shows the impact of the flood of natural gas from hydraulic fracturing and the decline in the price of large-scale solar installations. Most of the natural gas installations during the first half of this year were in Florida, Utah, and Texas—states with growing populations and increasing access to natural gas.

Gas’s growth for the first half of the year is below that of last year, Lee says. But much of last year’s growth was in quickly installed peaker gas plants to offset the loss of the San Onofre nuclear power plant in California, she notes, which was shut down because of maintenance problems.

Lee adds that this year’s numbers continue a decadelong decline in the need for new electricity capacity. The growing use of electricity in the U.S., she says, is “offset by efficiency gains from new appliance standards and investments in energy-efficient equipment.”