The Science Of Spherification

Theoreticians examine the atomic details of an avant-garde culinary technique 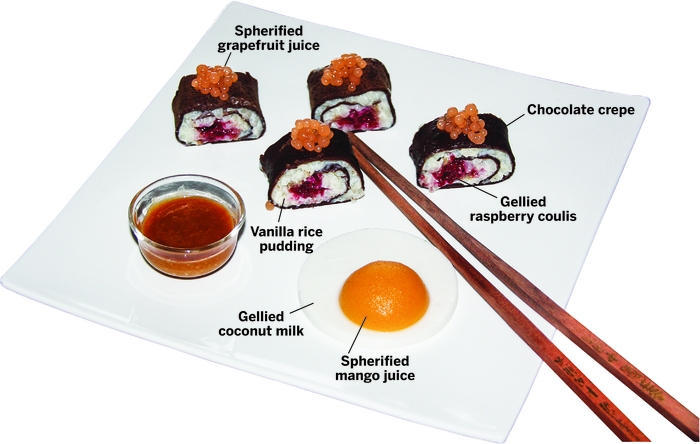 Credit: Christophe Chipot
Nothing on this plate is as it seems.

Gastronomical delights await dinner guests at the home of Christophe Chipot. Depending on their host’s inclination, guests might be served cheese and cognac-soaked figs with honey “caviar” or strawberry napoleons garnished with tiny beads of strawberry juice. On rare occasions, Chipot will make what he calls a “fake Japanese breakfast” featuring an “egg” of coconut milk and mango alongside sweet maki topped with grapefruit juice “roe.”

The key to many of the avant-garde items in Chipot’s repertoire is a culinary technique known as spherification. In spherification, liquid food is encased in a thin polysaccharide membrane that, when consumed, pops open to release a burst of flavor—whether it’s juice, olive oil, pureed peas, or some other edible delight.

Chipot’s interest in spherification doesn’t stop at the dinner plate though. The biophysics professor, with joint appointments at the University of Illinois, Urbana-Champaign, and France’s University of Lorraine, and Wensheng Cai, a computational chemist at China’s Nankai University, recently teamed up and used their expertise in molecular dynamics calculations to tease out just what’s happening at the atomic level when chefs spherify food (J. Phys. Chem. B 2014, DOI: 10.1021/jp508841p).

“For the first time in my life, I managed to combine my two passions,” Chipot says, “my job as a theoretician and cooking.”

Credit for the invention of spherification goes to English food scientist William J. S. Peschardt, who patented the technique in the 1940s (U.S. 2403547). Peschardt proposed the technique for making “edible imitation cherries and other soft fruits and foodstuffs.”

That description might not have whetted many appetites, but in 2003 spherification became the hot thing in the culinary world when chef Ferran Adrià started making spherified creations at his world-famous (but now shuttered) restaurant elBulli, in Roses, Spain.

The restaurant garnered three Michelin stars for its avant-garde cuisine, sometimes called molecular gastronomy (although that term has fallen out of favor with many chefs). Astute observers will note that Adrià appears as a coauthor on Chipot and Cai’s recent publication; he offered insight into the spherification process.

“Spherified stuff is really delightful. It really is a fantastic experience,” says Ali Bouzari, a culinary scientist and cofounder of Pilot Research & Development, a culinary industry consulting firm. “I’ve had it in many different restaurants many different ways, and I still get a kick out of it. It is genuinely a really interesting sensory experience to eat something like that,” he says.

Would-be avant-garde chefs can find directions for spherifying food online, at sites such as molecularrecipes.com or chefsteps.com. The basic technique involves mixing liquid food with sodium alginate and then dropping that solution into a calcium chloride or calcium lactate bath.

But what really intrigued Chipot was the second step in the spherification process, the use of a calcium solution. “It seemed to me that we could gain some insight from simulations,” he says. “Molecular dynamics simulations can be viewed as a computational microscope: It gives you quasi-infinite resolution with which you are able to see matter in action at the atomic level.”

So Chipot, Cai, and colleagues set up a simulation where they looked at how alginate interacted with different kinds of liquid nanoparticles depending on whether sodium or calcium ions are present. “The complete molecular assembly is on the order of 100,000 atoms,” Chipot says. “That’s not huge, but from the point of view of simulation, it’s pretty big.” They studied the system over the course of 200 nanoseconds, which Chipot notes is a fairly long time from a simulations standpoint.

“We examined the stability of the nanoparticle surrounded by this membrane of polysaccharide chains in the presence of sodium ions and calcium ions and found out that in the presence of sodium ions the membrane is not stable. It actually starts to disaggregate,” Chipot explains. “But when you put that in a calcium solution, all the sodium ions are washed away and replaced by divalent calcium ions, which reinforce the interaction of the polysaccharide chains. Then you have something that is really stable and long-lived.”

The researchers also studied precisely how the calcium ions coordinate to the polysaccharide chains to form the network. “We all know that divalent cations are prone to reinforce interactions between alginate chains. That’s very intuitive, but it’s something that I wanted to understand and quantify at the atomic level,” Chipot says, noting that this simulation disentangles the whole process step-by-step. “It tells what the important interactions are, why we need calcium, what’s happening at the surface of the liquid food.”

Hervé This, a chemical physicist at France’s AgroParisTech-INRA and a pioneer of molecular gastronomy, points out that other scientists have studied the interplay of calcium ions with alginate before, although not using molecular dynamics calculations.

In terms of avant-garde cuisine, This says, this work is interesting because it explores the science behind the phenomenon of spherification. “The numerous details of the calculation can lead to new systems,” he says. “In my opinion, gels are very important systems, and we are far from understanding enough of their behavior.”

Bouzari, the culinary consultant, tells C&EN that it’s been about five years since clients sought him out for help with spherification. “At elBulli, they were doing things with spherification that bordered on looking like a magic trick. But because they were some of the best chefs in the world, it was really beautiful and impactful,” Bouzari notes.

Since then, “the technique has been assimilated into the culinary canon,” he says. “It’s no longer anything remarkable.”

Even if spherification is no longer all the rage, the marriage of food and science is still a strong one, Bouzari says. “The whole idea of science in the kitchen isn’t a fad,” he says. “There is no scenario where science can fall out of vogue in the kitchen. A given technique may, but the interest in understanding the science of how food works that was sparked by avant-garde cooking in the early 2000s has and will continue to change the way we cook and eat forever.”

Electronic Materials
Chemistry in Pictures: Blooming brilliant
Energy Storage
Energy-storing walls made from ordinary red bricks
Nanomaterials
Magnetically controlled droplets rock, rotate, and roll
Share X
To send an e-mail to multiple recipients, separate e-mail addresses with a comma, semicolon, or both.
Title: The Science Of Spherification
Author: Bethany Halford
Chemical & Engineering News will not share your email address with any other person or company.