by Bree Feng, special to C&EN 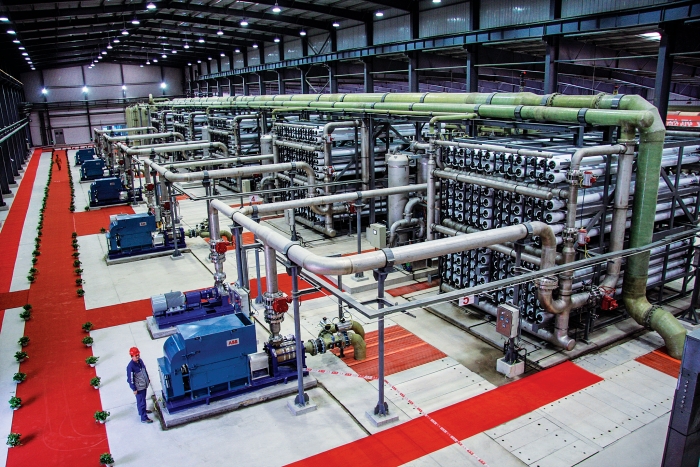 China’s largest freshwater body, Poyang Lake, has been drying up to a small fraction of its normal size each fall. Two years ago, the worst drought in decades left a pagoda that was once surrounded by water sitting forlornly on a parched hill. The lake’s regular depletion serves as a stark reminder of the country’s chronic water shortages.

China has 19% of the world’s population but only 6% of its freshwater. This natural deficiency has been magnified by reliance on coal-fired power plants, which use immense amounts of water to produce electricity. The official news agency Xinhua reported in May that 16 of the country’s 34 provinces, municipalities, and autonomous regions suffer from “severe water shortages.”

To alleviate the water woes, which are worst in the north where most of the country’s heavy industry and agriculture are located, the Chinese government has often turned to massive infrastructure projects such as dams and river diversions. The recent emergence of seawater desalination as a policy focus is now creating opportunities for companies, domestic and foreign, to build and operate large-scale desalination plants or supply key equipment such as reverse-osmosis membranes.

Chinese companies currently play an important role in plant construction, says Zheng Genjiang, the director of Hangzhou Water Treatment Technology Development Center, a subsidiary of state-owned China National Chemical (ChemChina). But the supply of key equipment such as membranes and high-pressure pumps is still 60–70% dominated by foreign companies, he adds.

Indeed, foreign companies built some of the country’s largest desalination facilities. In the coastal city of Tianjin, one of the country’s driest, Israeli company IDE Technologies uses vaporization to produce 200,000 m3 of water per day for local residents and an attached power plant. When the plant opened in 2010, it was China’s first large-scale supplier of desalinated water to a municipal network. Nearby, Singapore’s Hyflux runs a facility that produces 100,000 m3 per day through reverse osmosis.

The technologies used in the Tianjin plants echo the predominantly used methods worldwide. According to the Shenhua study, 65% of China’s desalination capacity uses reverse osmosis and most of the rest uses the vaporization method known as multieffect distillation.

But foreign companies wishing to invest in China’s desalination market face challenges. The Chinese government wants domestic companies to play a key role in this sector and in 2012 ordered that desalination plants must contain at least 70% domestically produced equipment. At the same time, overseas companies face rising competition from their Chinese counterparts, which are often backed by state funding.

Energy-intensive and costly, desalination also yields a product that is more expensive than municipal water. The contrast stands even starker in China, where the government heavily subsidizes municipal water. Water-consuming companies are especially reluctant to switch to a costlier, unsubsidized alternative.

Industry analysts still see opportunities for foreign companies, provided they can fill technology gaps in China. For example, around 300 Chinese companies are involved in producing reverse-osmosis membranes, according to the Chinese Ministry of Science & Technology, but foreign manufacturers and their advanced technologies dominate the market. Major players such as Toray Industries and Dow Chemical have provided membranes for Chinese desalination plants, and foreign firms continue to win big construction projects.

For example, in May, the prime minister of Malaysia attended the groundbreaking for a $2.4 billion desalination plant in Tianjin funded and built by the Malaysian company XianDa. Scheduled to open in 2017, the plant will produce 600,000 m3 of desalinated water for industrial use daily. According to the Chinese newspaper 21st Century Business Herald, Spain’s Abengoa Water signed an agreement last month with the Chinese city of Dalian to build a desalination plant at Changxing Island Industrial Park.

Zheng of the Hangzhou technology center says the overall story in China is more opportunity for both domestic and foreign players. “A 10–20% growth rate in installed capacity sounds right because it’s growing from a very low base,” he adds.

And at Hydranautics China, a producer of reverse-osmosis membranes that is owned by Japan’s Nitto Denko, Senior Sales Manager Linda Xie is optimistic about the company’s prospects in China, despite government policies to encourage homegrown players. Foreign companies can still find a place in the market provided they offer technical or other advantages, she says. “As a Chinese person, I personally feel that policies encouraging the development of the national industry are very practical.”

Comments
madduma Joseph (May 2, 2017 7:22 AM)
I am looking more an information's about pure water producing plant
Reply »