Water Treatment: A combined osmosis and distillation process could lower the cost of extracting phosphorus from wastewater 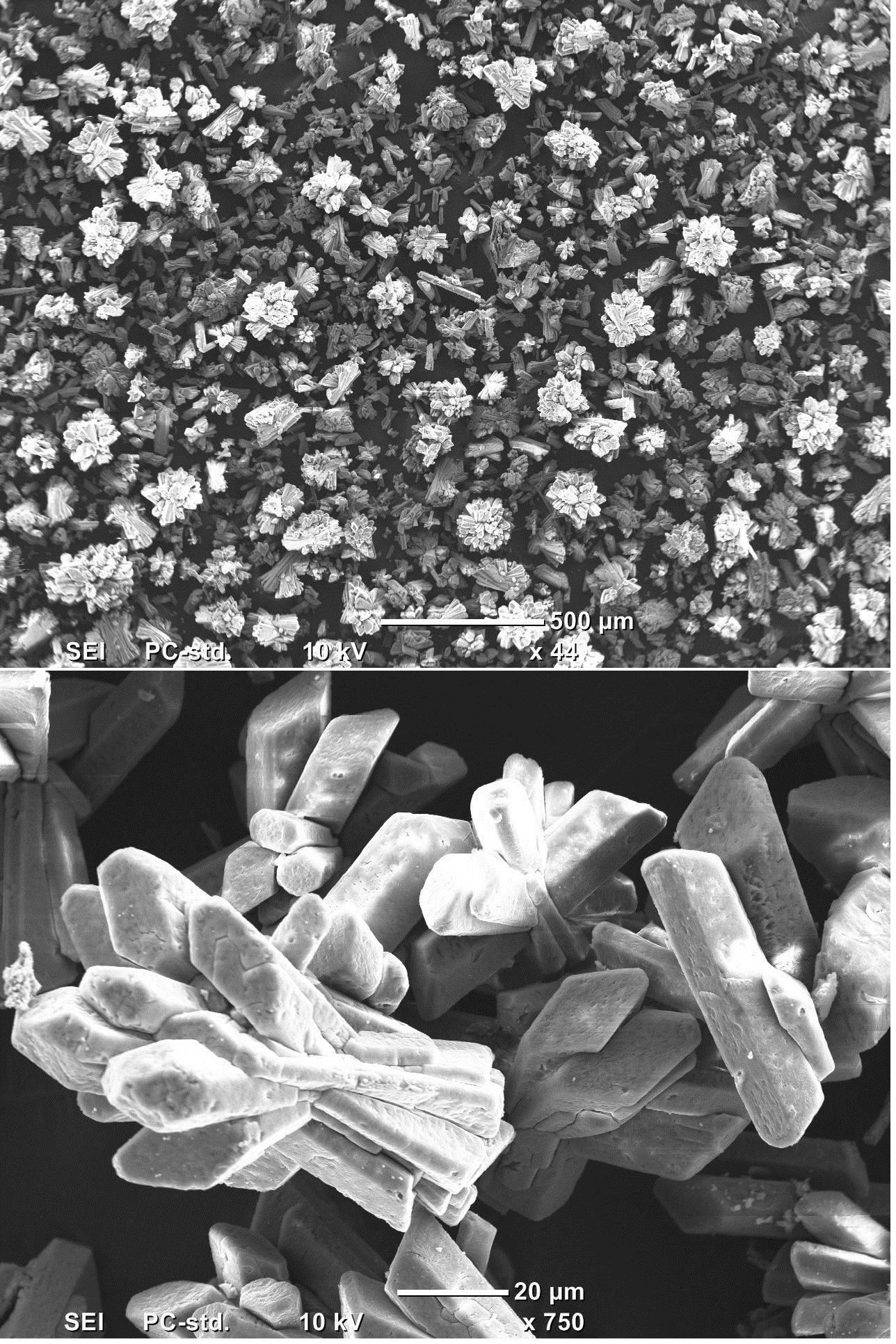 Credit: Environ. Sci. Technol. Lett.
Scanning electron micrographs show crystals of struvite, a slow-release fertilizer containing phosphorus, ammonium, and magnesium that was produced by a new wastewater treatment process. The bottom image is a magnification of the top image.

Scientists predict that the scarcity of phosphorus will increase over the next few decades as the growing demand for agricultural fertilizer depletes geologic reserves of the element. Meanwhile, phosphates released from wastewater into natural waterways can cause harmful algal blooms and low-oxygen conditions that can threaten to kill fish. Now a team of researchers has designed a system that could help solve both of these problems. It captures phosphorus from sewage waste and delivers clean water using a combined osmosis-distillation process (Environ. Sci. Technol. Lett. 2014, DOI: 10.1021/ez400189z).

Conventional methods for extracting phosphorus from wastewater use chemicals to precipitate a mineral called struvite from the water. Struvite contains phosphorus, ammonium, and magnesium, and is a useful slow-release fertilizer. Some struvite naturally precipitates out of the water in wastewater treatment plants, causing pipes to clog. But to extract the mineral in amounts that could be sold as fertilizer, engineers must add large amounts of magnesium and increase the pH of the wastewater by adding a strong base. The required amounts of the chemicals are expensive enough that the struvite recovery is seldom cost-effective for utility companies, says Long D. Nghiem, an environmental engineer at the University of Wollongong, in Australia.

To bring down the costs of struvite recovery from wastewater, Nghiem and his colleagues decided to modify a system they recently designed for harvesting freshwater from sewage waste using forward osmosis and membrane distillation (Environ. Sci. Technol. 2013, DOI: 10.1021/es404056e). By tweaking this method, they have reduced the amount of chemicals required to mine struvite from wastewater.

The team’s prototype system has two parts that work in tandem, one for harvesting struvite and the other for recovering freshwater. The first part is a two-sided cell divided by a semipermeable membrane with concentrated wastewater on one side and a highly concentrated salt solution on the other. Osmosis drives water across the membrane from the more dilute wastewater side to the saltier “draw” solution, increasing the concentration of phosphorus and ammonium in the wastewater.

In the second part of the system, where freshwater is recovered, the draw solution is heated and introduced into a cell with a microporous, hydrophobic membrane. Water vapor passes through to the cooler side of the membrane and condenses. A cell with a 1 m2 membrane could distill about 9 L of freshwater per hour. As this distillation process removes freshwater from the MgCl2 solution, it effectively renews the draw solution for continuous operation of the two-part system.

The forward osmosis and distillation process produces 2.4 g of struvite per liter of incoming wastewater. It requires less than one-sixtieth of the MgCl2 and one-fifteenth of the NaOH compared with the conventional method.

“It’s a very innovative and elegant proof of principle,” says Roland D. Cusick, an environmental engineer at the University of Illinois, Urbana-Champaign. But he says the team must overcome some hurdles before the system can be implemented on a commercial scale. In particular, they must address the fouling of the system’s semipermeable membrane, which must be frequently flushed with deionized water to maintain maximum flow rates.

Nghiem’s team is researching ways to limit this fouling and hopes to test the system on a pilot scale within the next few years. 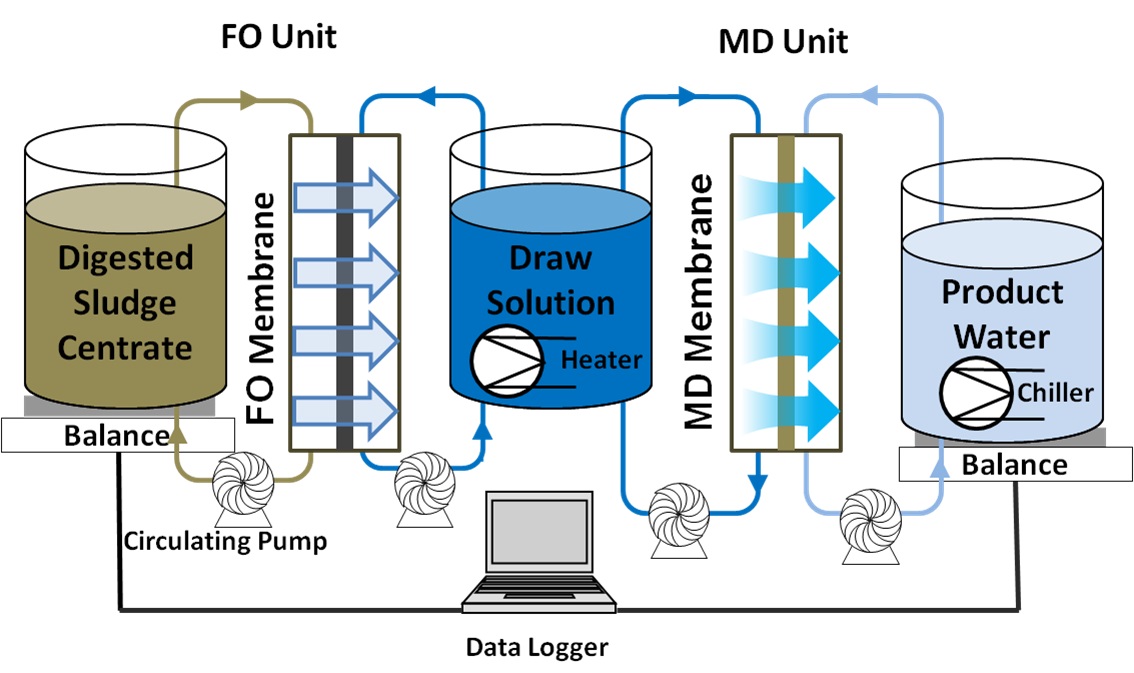 Credit: Environ. Sci. Technol. Lett.
A new system for harvesting phosphorus and freshwater from wastewater comprises a forward osmosis cell (left, FO Unit) and a membrane distillation cell (right, MD Unit). In the first cell, concentrated wastewater called digested sludge centrate (brown) circulates on one side of a forward osmosis membrane (FO Membrane) with a magnesium chloride draw solution (dark blue) on the other. Water moves from the sludge centrate to the draw solution. In the second cell, water vapor from the heated draw solution passes through a hydrophobic membrane (MD Membrane), and freshwater collects on the cooler side (light blue). In short, water moves from the sludge centrate through both cells, ending up as freshwater on the far right. As more water moves through the system, the sludge centrate becomes a better environment for a phosphorus-containing mineral to precipitate out.
Chemical & Engineering News
ISSN 0009-2347
Copyright © 2020 American Chemical Society

Water
How extreme bacteria squeeze water from a stone
Water
超高效的海水淡化
Water
How peracetic acid is changing wastewater treatment
Share X
To send an e-mail to multiple recipients, separate e-mail addresses with a comma, semicolon, or both.
Title: Device Mines Precious Phosphorus From Sewage
Author: Deirdre Lockwood
Chemical & Engineering News will not share your email address with any other person or company.