Biomaterials: Contact lenses release a glaucoma drug in a controlled fashion when triggered by an enzyme found in tears

Glaucoma Fighter
[+]Enlarge
Credit: ACS Nano
A hydrogel contact lens can be embedded with a gel that releases a glaucoma drug. 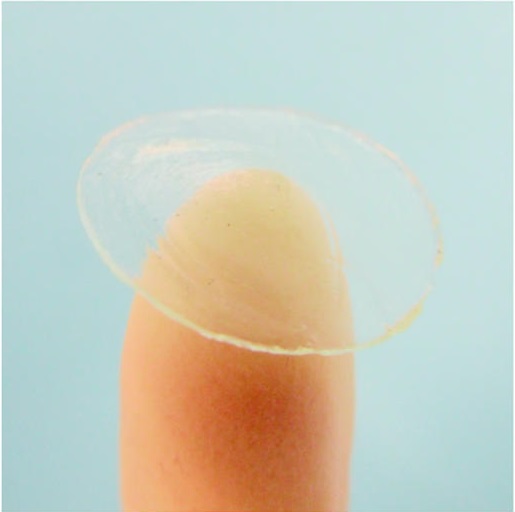 Credit: ACS Nano
A hydrogel contact lens can be embedded with a gel that releases a glaucoma drug.

Researchers have designed contact lenses that can release controlled amounts of a glaucoma drug (ACS Nano 2014, DOI: 10.1021/nn5002968). The lenses could deliver more consistent dosages of the drug than eye drops and make it easier for some patients to take their medication.

Most eye therapies take the form of medicated eye drops, but they have several drawbacks, says Dean Ho, a bioengineer at the University of California, Los Angeles. Often drops will leak out of the eye, making dosages inconsistent. What’s more, the medication that does go in arrives in one high-concentration burst that quickly tapers off. As a result, patients have to remember to take the eye drops a few times a day. Daily-wear hydrogel contact lenses that release a drug throughout the day could provide a simple solution for glaucoma patients to get necessary drugs, especially those who already need corrective lenses.

Ho wanted to make a contact lens that stored and released drugs in a controlled fashion, triggered by contact with the thin film of tears that coats the eye. He turned to nanodiamonds, faceted carbon particles about 5 nm in diameter. Some of the facets are positively charged, and others are negatively charged, so these nanoparticles attract water and can bind and release a variety of molecules. Nanodiamonds have been tested as cancer-drug carriers and show no evidence of toxicity, Ho says.

Ho and his team started by making a nanodiamond gel. First, they coated the nanodiamonds with a polymer, polyethyleneimine. Then, in the presence of the glaucoma drug timolol maleate, they crosslinked the polymer-coated nanodiamonds to the polysaccharide chitosan, trapping the drug in the resulting gel. When lysozyme, an enzyme in tears, cleaves chitosan, the gel begins to break down and the drug leaches out. To make the drug-releasing lenses, the researchers mixed this nanodiamond gel with a hydrogel used to make contact lenses, poured it into a mold, and triggered polymerization using ultraviolet light.

The UCLA researchers wanted to see how well the nanodiamond gel lenses stored the drug compared with lenses soaked in timolol or stamped with the drug using molecular imprinting. They immersed the lenses in a solution that mimicked tear fluid but lacked lysozyme. The nanodiamond lenses showed no drug release, but the other lenses released almost all the drug within an hour, indicating that their medicinal contents would leach out while in storage.

The nanodiamond anchors all the components in place and is key to the well-controlled release over time, says Ho.

Ali Khademhosseini, a bioengineer at the Harvard-MIT Division of Health Sciences & Technology, in Cambridge, Mass., agrees. It’s difficult to control drug release from hydrogels, but the nanodiamond system demonstrates sustained release when triggered by the tear enzyme, he says.

Ho is now planning to test the drug-releasing lenses in animals and will experiment with adjusting the timing of the drug release to see whether it will have clinical benefit.

Polymers
Celanese to sell stake in Polyplastics venture
Polymers
A new polymer keeps its strength with added degradability
Polymers
After purchase of Clariant business, PolyOne is now Avient
Share X
To send an e-mail to multiple recipients, separate e-mail addresses with a comma, semicolon, or both.
Title: Contact Lenses Deliver Drug For Glaucoma
Author: Katherine Bourzac
Chemical & Engineering News will not share your email address with any other person or company.

Lyn Foster (April 23, 2017 11:00 PM)
I am a 67 yo woman, and I am very interested in this research because I have been allergic to every drop that I have tried except for Travatan Z which I use at night. I have had laser holes put into the meshwork, but it hasn't helped because I have pigment flaking off and blocking the mesh. My eye pressure is still too high. The contact lens would put medicine directly into my eyes without irritating the tissue around them. Could you please let me know if these contacts are currently being used in humans or if it is possible to be involved in the studies? Thanks.
Reply »