Environmental Health: A baby sleeping in a crib breathes in air containing twice the amount of potentially harmful VOCs than that of typical indoor air

GASSY MATTRESS
[+]Enlarge
Credit: Shutterstock
Given that infants sleep roughly half the day on foam crib mattresses, the materials are a significant source of volatile organic compound exposure for the children. 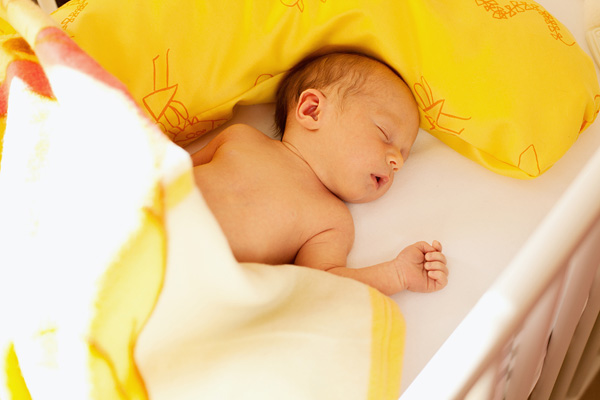 Credit: Shutterstock
Given that infants sleep roughly half the day on foam crib mattresses, the materials are a significant source of volatile organic compound exposure for the children.

Infants and toddlers spend much of their day being shuttled from their crib to a changing table to a cushioned car seat, putting them in close contact with products that contain foam. A new study shows for the first time that foam crib mattresses give off significant amounts of volatile organic compounds (VOCs) and that infants are exposed to elevated levels of these potentially harmful chemicals as they sleep (Environ. Sci. Technol. 2014, DOI: 10.1021/es405625q).

In the process of making foam-based consumer products, manufacturers use a variety of resins, catalysts, solvents, and adhesives, many of which can volatilize from the final product. Earlier studies have linked chronic exposure to low concentrations of VOCs to elevated risks of lung infections, allergies, and asthma in infants. And because these children spend 12 to13 hours per day sleeping, an actively emitting crib mattress could be an important source of exposure to VOCs. So Brandon Boor, an environmental engineer at the University of Texas, Austin, decided to measure the amount of VOCs given off by crib mattresses and estimate the dose that an infant might inhale while sleeping.

Boor and his colleagues analyzed 20 new and used crib mattresses made from either polyurethane foam or polyester foam. The researchers placed mattress samples in a chamber and used gas chromatography-mass spectrometry to determine the rate of VOCs released. They also conducted studies in a room-sized chamber using a heated steel cylinder that mimicked the body temperature of a sleeping infant. The team reasoned that the heat from a child would increase the release of VOCs compared to a mattress alone, so the emissions would better match those in real-world conditions. In this experiment, they compared VOC concentrations in an infant’s breathing zone—about 2.5 cm above the mattress—to levels in the room.

The researchers identified more than 30 different VOCs, such as phenol, which the Environmental Protection Agency classifies as an air pollutant, and 2-ethylhexanoic acid, which the European Commission designates as a chemical that can disrupt development. At room temperature, the mattresses released VOCs at an average rate of 56 μg per m2 of mattress per hour—comparable to other indoor materials, such as laminate flooring. On average, new mattresses emitted about four times as much VOCs as the old mattresses.

But the team’s most significant observation was that VOC levels were significantly higher in a sleeping infant’s breathing zone compared to those in bulk room air, which means the children are exposed to twice the VOC concentrations as people standing in the room. Based on average infant sleep times, the researchers estimate that infants inhale approximately 8 μg total VOCs per kg of body weight per day from their mattresses. This amount is similar to infants’ exposure to the VOCs toluene and benzene from indoor air, as measured in an earlier study.

Boor thinks the current results suggest that manufacturers should look for ways to use low-emitting materials when making foam products to mitigate infants’ exposure to VOCs. Also, parents could set aside a new mattress for six months, allowing it to give off most of its VOCs before bringing it in the house, suggests Ying Xu of UT Austin, a study coauthor.

Heather M. Stapleton, an environmental chemist at Duke University, says the study is important because it shows that an infant’s exposure to VOCs is significantly greater than that of an adult standing 10 feet away, “and regulatory agencies don’t take this into consideration.” The work also highlights how critical the sleep environment is when assessing infants’ chemical exposure, she says.

Comments
Deb de Moulpied (February 28, 2014 8:43 AM)
Excellent research. The question begs ... why isn't this kind of research done before products are made and allowed into the market place?
Reply »

andrew (March 4, 2014 11:26 AM)
just buy it at a garage sale or take hand-me-down from friend/fam after it has off-gassed in someone elses house and save the environment a litle too--- and don't be oc about it being used or dirty: humans have done okay for a long time without swimmnig petro products PAH's PCBs thalates --and crack the window a lttle --the air won't hurt you either
Reply »

Julia Rosa (April 8, 2014 11:38 AM)
I agree. If you can find a good used mattress go for it.
Better than a new chemical one. There are really good organic mattresses out there that don't have all of the toxins in them to consider.
I found some great ones at Sweet Night Baby. And there are others.

Jefferson Lai (December 7, 2015 7:06 PM)
I use to sleep on a spring mattress and have the most uncomfortable sleep - itchy throat, irritated eyes, asthma, allergies, runny nose - basically having hayfever in bed.
Now i use a organic topper pad (100% natural latex with cotton cover) on top of my mattress and the change in sleep quality is day and night. Havent sleep better in all my life - no more irritation or allergies. Skin has cleared up too. Im guessing it was the dustmites or bedbugs but now i'm protected by the natural latex (hypoallergenic and antimicrobial).
I highly recommend getting organic bedding if your susceptible to asthma, allergies or have sensitive skin.
Edit: those of you asking i got mine from zaanta.com.au.
Reply »