Materials: Lithium-sulfur battery electrodes made of an inexpensive sulfur copolymer have one of the highest energy-storage capacities ever reported

Sulfur Tangle
[+]Enlarge
Credit: ACS Macro Lett.
To make a sulfur copolymer for battery electrodes, chemists first heat elemental sulfur (top) to 185 ºC, which forces the sulfur to polymerize (red). They then add 1,3-diisopropenylbenzene (blue) and continue to heat the mixture to form the copolymer (bottom). 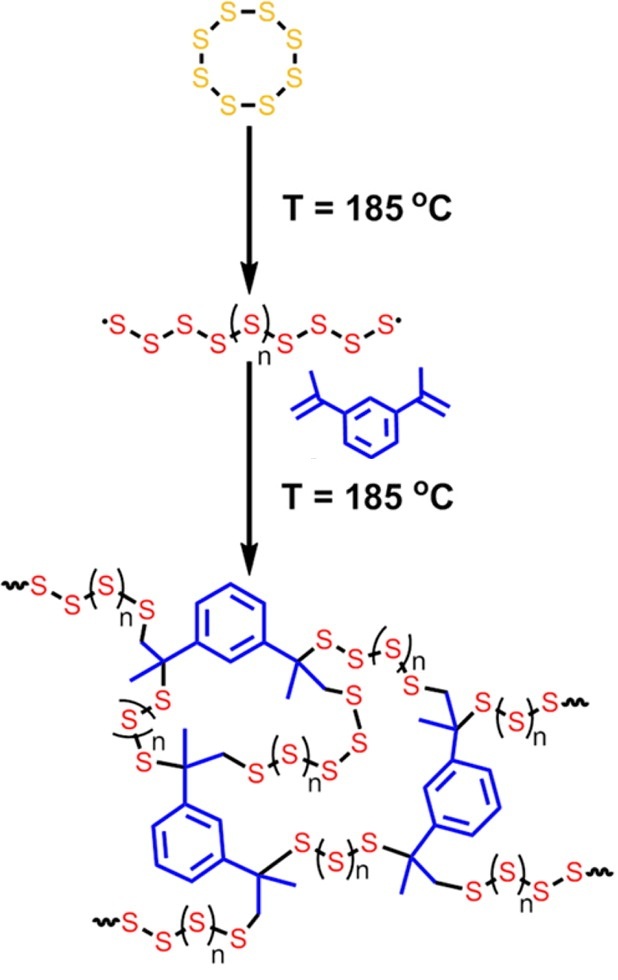 Credit: ACS Macro Lett.
To make a sulfur copolymer for battery electrodes, chemists first heat elemental sulfur (top) to 185 ºC, which forces the sulfur to polymerize (red). They then add 1,3-diisopropenylbenzene (blue) and continue to heat the mixture to form the copolymer (bottom).

Lithium-sulfur batteries promise to store four to five times as much energy as today’s best lithium-ion batteries. But some major practical hurdles have stood in the way of their commercialization. Now researchers demonstrate that a sulfur-based polymer could be the solution for lightweight, inexpensive batteries that store large amounts of energy (ACS Macro Lett. 2014, DOI: 10.1021/mz400649w).

Lithium-sulfur batteries aren’t practical because they don’t last. “Lithium-ion batteries can last 1,000 charge cycles, but lithium-sulfur batteries tend to fail before they’re charged 100 times,” says Jeffrey Pyun, a chemist at the University of Arizona. Elemental sulfur in these batteries’ cathodes reacts with lithium ions in the electrolyte to eventually form lithium sulfur salts that deposit and build up on the electrodes. These side reactions deplete the cathode of its sulfur, decreasing the storage capacity of the battery and causing structural problems for the electrodes.

Several groups have extended the lifetimes of lithium-sulfur batteries by trapping the element inside nanomaterials, which prevents it from dissolving from the cathode. Unfortunately these cathode materials are expensive, Pyun says.

He thinks electrodes made from sulfur polymers, like other plastic products, should be inexpensive to manufacture on a large scale. The raw material is abundant: 60 million tons of elemental sulfur are produced each year, mostly during petroleum refining, and there are few uses for it.

Then last year, Pyun’s group reported a way to transform this elemental sulfur into an inexpensive cathode material (Nat. Chem. 2013, DOI: 10.1038/nchem.1624). By heating the sulfur to 185 ºC and then adding an organic compound, 1,3-diisopropenylbenzene, the researchers form a copolymer containing strings of sulfur atoms tangled up with the diisopropenylbenzene. The organic part of the polymer doesn’t store energy or participate in reactions in the battery. Rather, Pyun says, it seems to act as a plasticizer that keeps the lithium-sulfur salts in the reactive mix, rather than in intractable deposits.

In the new study, the team wanted to find the best cathode material recipe and test it in batteries, something they didn’t do in the 2013 paper. They tested 2,032 copolymers, each with different amounts of sulfur, in coin-cell batteries. These batteries resemble those used in wristwatches and are the standard way researchers test new battery designs.

The best performing copolymer consisted of 90% sulfur by mass. Batteries using this copolymer had an initial storage capacity of 1,225 mAh per gram of material. After 100 charge-discharge cycles, the capacity dropped to 1,005 mAh/g, and after 500 cycles it fell to about 635 mAh/g. In comparison, a lithium-ion battery typically starts out with a storage capacity of 200 mAh/g but maintains it for the life of the battery, Pyun says.

To become a commercial product, a battery made with the sulfur polymer will need to have a steady storage capacity throughout its lifetime and be able to last the 1,000 cycles of today’s batteries. To get there, Pyun is experimenting with other kinds of sulfur copolymers that may have better properties.

“This shows that polymeric sulfur is a competitive material” for lithium-sulfur battery electrodes, says Jodie L. Lutkenhaus, a chemical engineer at Texas A&M University. Lutkenhaus, who is also developing polymer battery materials, says that the polymers show promise in other ways besides high storage capacity. Polymer batteries are likely to be cheaper and lighter, and they could enable flexible storage devices for portable electronics. They could even do double duty as a structural material—for example, as an airplane wing or a car door that also stores energy.

Sam (March 3, 2014 2:22 PM)
If the inexpensive battery after 1000 charges still holds more than the current standard wouldn't that generally be superior? Does the discharge need to be uniform and if so can some method of regulating the flow be applied?
Reply »

Justin (March 4, 2014 2:53 PM)
I hate to ask, but why wouldn't the copolymer batteries have a market use? Even at half the lifetime of a li-ion battery they have 3 times the energy storage. I'm sure tessla and several other manufacturers would be interested in the technology dependent on cost and risk.

Literally put any existing electric car now would have it's life span cut in half, but it would also be able to go 1.5x the distance over its lifetime.
Reply »

zonde (May 16, 2014 6:03 AM)
what are the effects of sulfur polymer to environment, toxicity of sulfur when organic reactions are oxidized by oxygen to give sulfinic or sulfonic acids or emission of hydrogen sulfide........
Reply »