Water Quality: Study shows that a test commonly used to analyze drinking water is inappropriate for monitoring radium in the wastewater from hydraulic fracturing 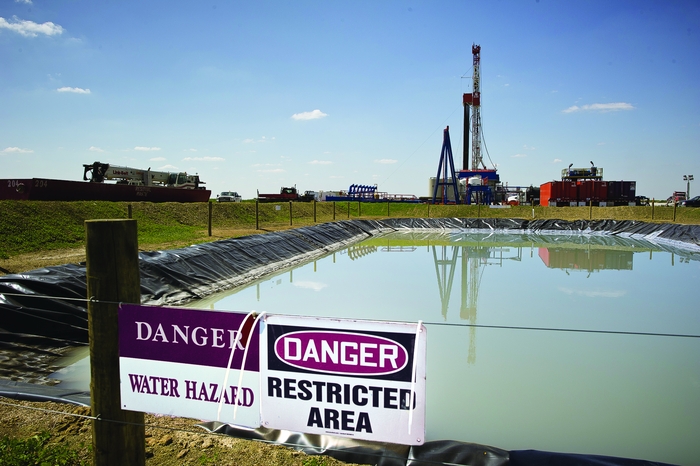 When energy companies extract natural gas from shale using hydraulic fracturing, they generate flowback wastewater, a brine solution that contains naturally occurring radionuclides, including radium isotopes. Because some of this wastewater is diverted to treatment plants and eventually discharged into local waterways, state environmental agencies have started to establish procedures for monitoring radium levels in the wastewater. However, a new study cautions that one test state agencies are considering could underestimate radium levels by as much as 99% (Environ. Sci. Technol. Lett. 2014, DOI: 10.1021/ez5000379).

Environmental protection departments in Pennsylvania and New York have used or suggested others use a radium-measurement technique that the U.S. Environmental Protection Agency recommends for analyzing drinking water. In the test, researchers add a spike of barium to a water sample and then mix in sulfuric acid to precipitate out sulfate salts of the two metals. By measuring the radioactivity of the precipitated solids, researchers can calculate the amount of radium present.

Michael K. Schultz, a professor of radiology at the University of Iowa, and his colleagues decided to test the method’s accuracy because studies have shown that the drinking-water method is unsuitable for solutions with high concentrations of ions, which is the case for fracking wastewater.

His team used several methods to measure amounts of radium isotopes in a sample of flowback water from the Marcellus Shale, a large formation being exploited for shale gas in the northeastern U.S. Besides the coprecipitation technique, they also tested high-purity germanium gamma-ray spectroscopy, which gives a direct measurement of several radium isotopes, and a portable spectrometry technique to detect radon isotopes that are decay products of radium.

Compared with gamma-ray spectroscopy—considered the gold standard for radium analysis—the coprecipitation method recovered less than 1% of 226Ra, the most abundant radium isotope in the sample. The radon isotope method detected 91% of it.

The EPA method is ineffective for analyzing fracking wastewater because it produces unmanageable amounts of precipitate. In the flowback water, concentrations of barium and other divalent cations are “so high that when you add a little bit of sulfuric acid, you get a mountain of material,” Schultz says. The solution can bubble over, and the amount of precipitate is hard to dry for accurate radioactivity measurements. The method is useful for drinking water, because radium and other ion levels are typically low in those samples. But radium levels are high enough in fracking wastewater that they can be directly measured with gamma-ray spectroscopy, Schultz says.

Avner Vengosh, a geochemist at Duke University, says most researchers who study radium isotopes in fracking waste, including his lab and the U.S. Geological Survey, directly measure them with gamma-ray spectroscopy. “People have to know that this EPA method is not updated” for use with fracking wastewater or other highly saline solutions, he says.

Last year, Vengosh and his colleagues found that sediments downstream of a Pennsylvania plant that treated fracking wastewater had 226Ra levels about 200 times as high as those upstream. To avoid this contamination, gas companies have started to recycle the wastewater in drilling operations or inject it in deep wells instead of sending it to treatment plants, Schultz and Vengosh say.

Pollution
Oil and gas wastewater is a cheap fix for road dust, but it comes at a toxic cost
Environment
Oil and gas wastewater leaves radium in Pennsylvania stream sediments
Persistent Pollutants
Toxic chemicals from fracking wastewater spills can persist for years
Share X
To send an e-mail to multiple recipients, separate e-mail addresses with a comma, semicolon, or both.
Title: Analytical Test Could Underestimate Radioactivity In Fracking Wastewater
Author: Deirdre Lockwood
Chemical & Engineering News will not share your email address with any other person or company.

Comments
Greg Pace (March 9, 2014 9:08 PM)
Interesting, because in Ohio the OH EPA has been using the 901.1 method for shale drill cuttings, where we understand that this protocol was originally created for water. A lab we checked with using this protocol said they use the 21-day hold with this, but we are still hesitant to believe that this method correctly detects isotopes to be able to make an accurate calculation of the R-226 that exists. The EPA could not even answer to me how the lab uses this protocol ... I had to make two phone calls myself to find the actual lab that did the study, and they were down in Texas. The EPA doesn't seem to have enough focus on this to determine whether their own protocols are being complied with in any way that meaningfully determines Radium 226 amounts.

We have a water waste treatment plant in Ohio, legally accepting brines that uses a hand-held to determine radioactive amounts, which as we understand will not detect radium anywhere near the 5 PiC/L limit for drinking water. The treated water ends up in the Mahoning River, where some get their drinking water from downstream. HOw can our regulatory environment be so careless and unscientific in their methods?
Reply »

Chris Silva (March 10, 2014 10:58 AM)
This shows how a test set for one environment is hopelessly useless in another - unless there could be some other intermediate process developed to nullify the interference problem...

I wonder what this will do to change overall water usage or efficiency of the fracking process. Besides the radiation I am sure there are many other heavy metals and chemicals found down river - as yet not regulated or defined in an MSDS - that we have to worry about. But I do love energy independence...
Reply »