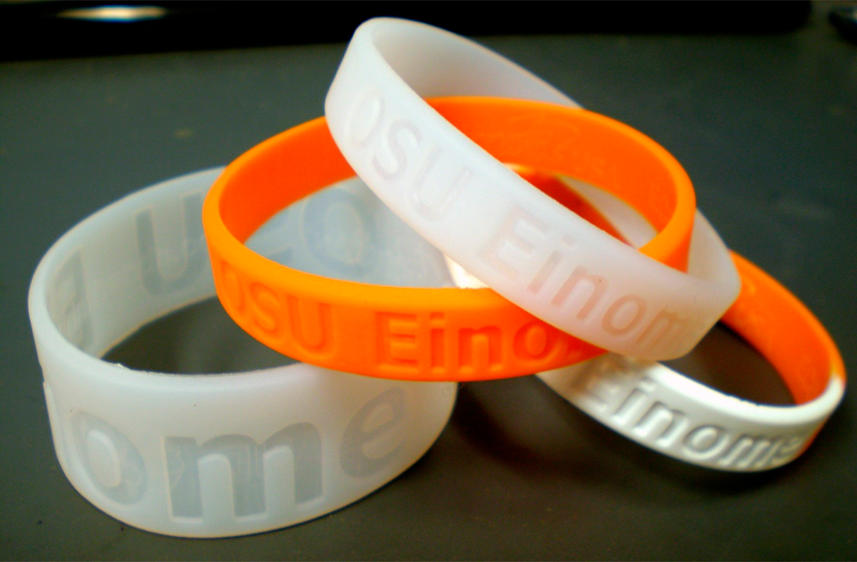 Credit: Environ. Sci. Technol.
Lightweight, easy-to-wear silicone wristbands could serve as personal monitors that pick up a person’s exposure to chemicals in the environment.

People often slip on colorful silicone gel bracelets to show support for a favorite cause or sports team. Now, researchers demonstrate that those wristbands can serve a different purpose. The bands can act as easy-to-wear devices that track a person’s chemical exposure over the course of a day, week, or even months (Environ. Sci. Technol. 2014, DOI: 10.1021/es405022f).

Researchers want to monitor the range of compounds that people inhale in different environments to see if they can tease out any potential health effects. Some of the most informative existing personal exposure monitors are bulky, battery-powered devices that have to be carried around in a backpack all day. Kim A. Anderson of Oregon State University got the idea to test silicone wristbands after seeing fans wearing them at a football game. She knew that silicone acts like a sponge, absorbing a variety of compounds from the air.

She and her team recruited 30 volunteers to wear specially manufactured silicone bracelets continuously for 30 days. The researchers collected the devices, used solvents to extract the compounds trapped in the silicone, and identified the compounds using gas chromatography/mass spectrometry. They looked for 1,200 possible compounds and found 49, including polyaromatic hydrocarbons (PAHs), flame retardants, and other industrial chemicals, as well as personal care products and pesticides.

The researchers also tracked eight construction workers who wore combinations of three types of silicone monitoring devices, including wristbands, over work periods lasting up to 40 hours. At the end of each sampling period, the team observed different compound combinations and levels in the silicone for each person depending on how they spent their day. For example, the team found that construction workers who worked in a partially enclosed setting picked up more PAHs than those who worked outdoors.

Julie Herbstman, an epidemiologist at Columbia University, says the backpack monitors are still the gold standard for personal exposure monitoring, in particular because they can track particulate matter, which the silicone bands would miss. But the advantage of a wristband is that it’s so unobtrusive that the wearers “sort of forget about it.” Herbstman is now working with Anderson’s team to test the bands with pregnant women to track their exposure to PAHs and to compare the performance of wristbands with backpack monitors.

Pollution
Measuring microplastics in seafood
Pollution
Satellites can now see air pollution inequality within cities
Pollution
Mercury makes it deep into marine trenches
Share X
To send an e-mail to multiple recipients, separate e-mail addresses with a comma, semicolon, or both.
Title: Silicone Bracelets Find A New Purpose
Author: Naomi Lubick
Chemical & Engineering News will not share your email address with any other person or company.

Mark (July 29, 2014 1:00 AM)
It will be really great if the lightweight, easy-to-wear silicone wristbands will be tasted successfully with pregnant women so that it can track a pregnant women's particular matter of exposure to chemicals in the environment.
Reply »