Bendable
[+]Enlarge
Credit: Nano Lett.
A 12-μm-thick solar cell made from inexpensive, upgraded metallurgical silicon (UMS) gets an efficiency boost from a coating made of metal nanoparticles. 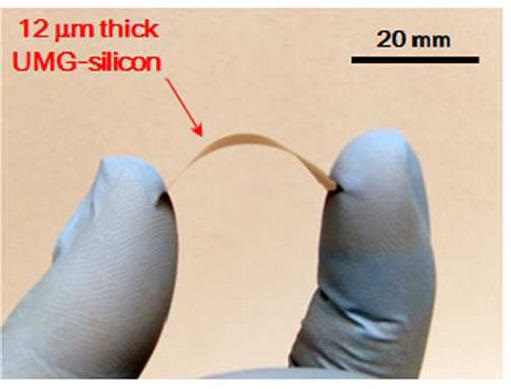 Credit: Nano Lett.
A 12-μm-thick solar cell made from inexpensive, upgraded metallurgical silicon (UMS) gets an efficiency boost from a coating made of metal nanoparticles.

A light-absorbing coating transforms a low-efficiency solar cell made of an inexpensive form of silicon into one with promising performance (Nano Lett. 2014, DOI: 10.1021/nl4048064). Further research on this coating of metal nanostructures could help improve the performance of other kinds of solar panels without adding much to their cost, the developers say.

Although growing in popularity, solar energy is still too expensive to compete with electricity from coal and other fossil fuels. Researchers would like to bring down the cost of solar panels without compromising their efficiency of converting sunlight into electricity. One way to lower costs of devices would be to make thin, light solar cells using small amounts of silicon. Unfortunately, such devices absorb light poorly and thus have low efficiencies.

Anish Tuteja and Akram Boukai, materials scientists at the University of Michigan, Ann Arbor, and their colleagues relied on an exotic physical effect in metal nanostructures to improve the performance of these thin solar cells. Metal nanostructures interact strongly with light via energy waves called plasmons that propagate on the surface of the materials. Researchers have spent considerable effort trying to apply plasmonic effects to solar cells because they help devices better absorb incoming light, which leads to improved efficiencies. But a major hurdle has been fabricating metal nanostructures on a large, practical scale, Tuteja says.

The researchers built a 12-μm-thick solar cell out of this type of silicon and added four layers of metal nanostructures using a process called block copolymer lithography. They started by spin-coating a block copolymer onto the silicon and selectively removing part of it to produce a pattern of pores. This created a mask so the researchers could etch a pattern of 20-nm-diameter pits in the silicon surface using reactive-ion etching with SF6/C4F8. Next they deposited a thin film of silver or gold into the silicon pits and on top of the polymer. Heating the whole structure caused the metal to coalesce, forming a double layer of nanoparticles—one on top of the polymer and another inside the pits. After coating the cell with a thin film of glass, the team repeated the process starting with another coating of the polymer and then etching into the glass. The finished coating had four layers of nanoparticles and was about 100 nm thick.

Under a light source that approximates the mixture of wavelengths in sunlight, the resulting solar cell absorbs 98% of the light that hits it. The metal-nanoparticle-coated device converts 10.7% of the energy from incoming sunlight into electrical energy, while the uncoated one is only about 2.6% efficient. As a comparison, commercial flexible solar cells made from thin films of amorphous silicon, another low-grade form of the element, are at best about 6% efficient, says Duck Hyun Lee, one of the Michigan researchers.

Although the coatings didn’t break records for thin-film solar cells, the device’s efficiency is good enough to show that plasmonic nanostructures could help improve the performance of thin-film cells, says Yi Cui, a materials scientist at Stanford University who also works on coatings to boost solar cell absorption. Tuteja thinks the coating’s advantage is that it is simple to make and potentially inexpensive. The group is now working out the costs of adding this coating to other types of solar cells.