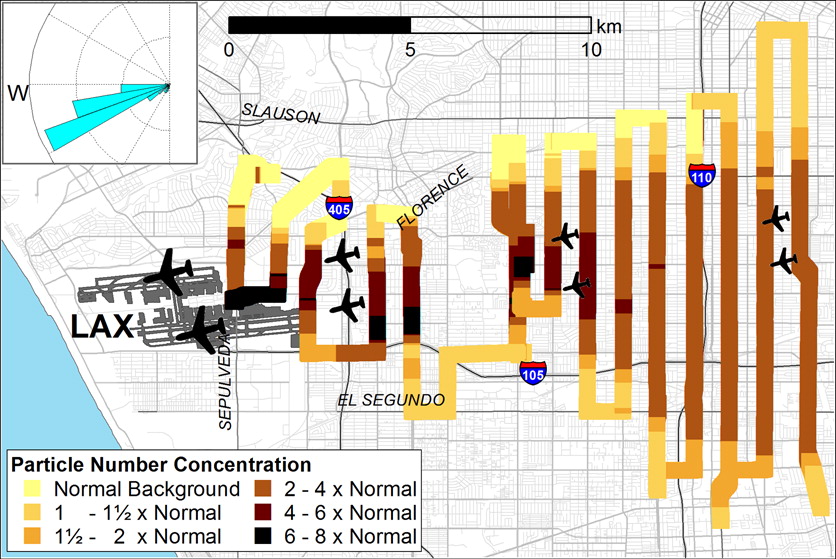 Credit: Environ. Sci. Technol.
Researchers drove along roads around Los Angeles International Airport (LAX) to measure levels of ultrafine particulate matter (colored paths). They found elevated levels (indicated by colors) up to 10 miles east of the airport. This area is downwind of the consistent prevailing winds from the west (top inset).

As planes take off and land at busy airports, their exhaust pollutes surrounding areas with contaminants, including ultrafine particles that may contribute to heart and lung disease. A new study shows that at Los Angeles International Airport (LAX), the sixth busiest airport in the world, this pollution affects a larger area than previously predicted. A team of researchers found elevated concentrations of ultrafine particles up to 10 miles east of the airport (Environ. Sci. Technol. 2014, DOI: 10.1021/es5001566). The data raises alarms about the health impacts of airport pollution on those who work and live nearby, the researchers say.

Mobile Monitor
[+]Enlarge
Credit: Scott Fruin
University of Southern California researchers outfitted a hybrid car with instruments to monitor air pollution near Los Angeles International Airport in real time. Air is pulled into a duct from the rear passenger side window and measured with instruments in the trunk. Air exits from a vent in the rear driver side window. 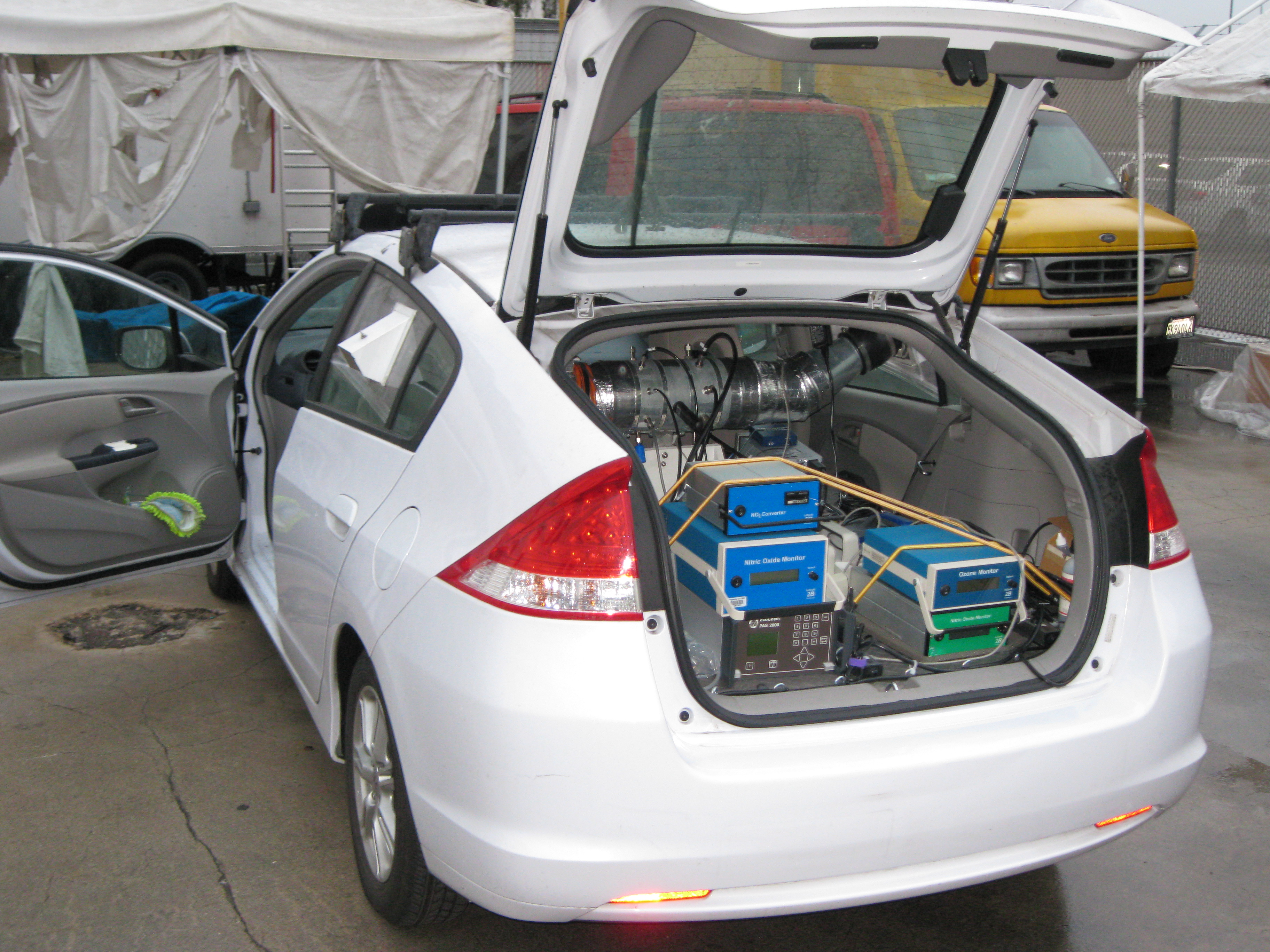 Credit: Scott Fruin
University of Southern California researchers outfitted a hybrid car with instruments to monitor air pollution near Los Angeles International Airport in real time. Air is pulled into a duct from the rear passenger side window and measured with instruments in the trunk. Air exits from a vent in the rear driver side window.

Particulate matter is one of the major pollutants regulators and environmental scientists monitor to determine air quality in urban areas. For example, the Environmental Protection Agency sets standards for concentrations of fine particulate matter, or particles less than 2.5 μm in diameter. These particles are strongly linked with increased risk of heart and lung disease.

But recently scientists have grown especially concerned about ultrafine particles, less than 0.1 μm in diameter, which are neither regulated nor routinely measured. They can deposit deep in the lungs, where the particles can move into the bloodstream.

Since these ultrafine particles are abundant in jet exhaust, researchers have previously studied their concentrations at fixed locations up to about three miles from airports. But to study a larger area in real time, Scott A. Fruin, an environmental health researcher at the University of Southern California, and colleagues outfitted a car with air monitoring equipment and drove around the Los Angeles area.

The prevailing winds in Los Angeles blow from the west and are remarkably consistent throughout the day and year. So, on about 30 days over a three-year period, the team surveyed areas downwind of the airport for a dozen air-quality metrics with the mobile monitoring system. Using a condensation particle counter, they measured the concentrations of total particles, which closely approximate concentrations of ultrafine particles.

Fruin was surprised by their findings. Over an area of about 60 km2 downwind of LAX, where hundreds of thousands of people live or work, the particle number concentration was at least twice that of nearby urban areas. By taking measurements near freeways in areas that were not downwind of the airport, the team estimates that freeway traffic contributed only 5% or less of the ultrafine particulate matter measured in the LAX area.

Fruin says the team expected to reach a point where the particle number concentrations were not elevated, but they never did. “We just ran out of drive time.”

They calculate that the amount of ultrafine particle pollution associated with the airport is equivalent to that of up to half of all the freeways in the Los Angeles area, which cover about 1,500 km.

Linsey C. Marr, an environmental engineer who studies air pollution at Virginia Tech, says the real-time, mobile measurements allowed the team to clarify LAX’s pollution footprint. She was surprised at how large of an impact the airport had on air quality in surrounding neighborhoods.

Other large airports near densely populated areas could have similar effects, Fruin says, although regions with more variable winds would diffuse the pollution over a larger area. In Los Angeles, he notes, the consistent wind direction and constant airport activity mean that residents living downwind are exposed to this pollution most of the time.