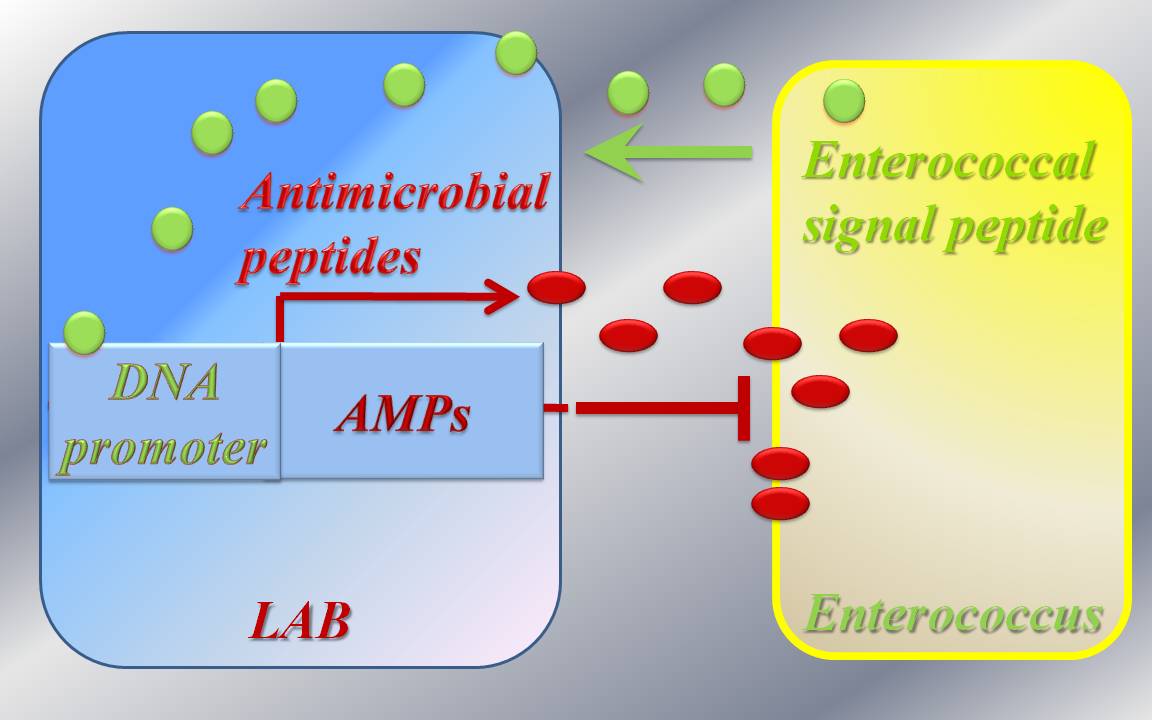 As pathogenic bacteria evolve resistance to our most powerful antibiotics, scientists are seeking new weapons in humanity’s age-old battle with the microbes. Now researchers have enlisted the help of a fellow bacterium to sense and destroy a multidrug-resistant pathogen. They have engineered Lactococcus lactis, a benign bacterium found in dairy products, to attack Enterococcus faecalis, a gut bacterium that can cause hospital-acquired infections (ACS Synth. Biol. 2014, DOI: 10.1021/sb500090b).

Until the late 1980s, scientists considered enterococcal bacteria harmless, if not helpful, residents of the human gastrointestinal tract. But then the bacteria became resistant to vancomycin, often considered the antibiotic of last resort because it gets deployed only after other antibiotics have failed.

“It’s frightening” that hospital patients can become infected with these bacteria that are resistant to many of our available antibiotics, says Yiannis N. Kaznessis, a chemical engineer at the University of Minnesota, Twin Cities. As an alternative to antibiotics, Kaznessis and others have studied antimicrobial peptides called bacteriocins. Bacteria produce bacteriocins to inhibit the growth of other, closely related bacterial strains.

Researchers like Kaznessis have tried to deliver bacteriocins to the gastrointestinal tract of animals to kill pathogenic enterococci, but it has been a challenge, he says. The peptides cannot be ingested or injected into the bloodstream because they are quickly degraded by proteases. So Kaznessis and his colleagues decided to package genes encoding three bacteriocins into lactic acid bacteria—the safe, hardy bacteria used to make dairy products such as buttermilk and cheeses.

But Kaznessis wanted to ensure that the lactic acid bacteria would produce bacteriocins only when they encountered enterococci. “If the lactic acid bacteria produced antimicrobial peptides constantly, the entire gut microbiome would be affected,” he says. The bacteriocins might kill off beneficial bacteria in the gastrointestinal tract, leaving more space and resources for pathogenic strains to flourish.

So the team engineered L. lactis to produce bacteriocins only when they detect a sex pheromone produced by E. faecalis. The pathogens produce this pheromone, called cCF10, to communicate with other enterococci in their environment. To turn L. lactis into a cCF10 detector, the researchers constructed a DNA plasmid containing a specific DNA sequence, or promoter, that responds to the pheromone. When cCF10 is present, the promoter triggers production of the three bacteriocin genes that also sit on the plasmid. “The lactic acid bacteria can sense the enterococcal strains, and then—and only then—do they produce large quantities of the bacteriocins,” Kaznessis explains.

When the engineered lactic acid bacteria were grown together with E. faecalis in the same liquid culture, they reduced the pathogen’s growth by about 50 to 75% compared to cultures grown without L. lactis. The researchers also showed that broth taken from liquid cultures of the engineered bacteria treated with cCF10 inhibited the growth of three vancomycin-resistant Enterococcus faecium strains isolated from patients.

Kaznessis thinks that combining the new strategy with existing antibiotics may offer better control of enterococcal infections. His lab has performed previous experiments in which they treat enterococci with streptomycin, antimicrobial peptides, or both. Many enterococci are resistant to streptomycin, and some in a population are resistant to the bacteriocins. “But if we use both, we completely wipe out the enterococcal strains,” Kaznessis says.

“Approaching the problem of antibiotic resistance is really about taking multipronged approaches,” says Christopher A. Voigt of Massachusetts Institute of Technology. “Engineering organisms that can sense and interact with the microbiome, as was done in this paper, is an important part of that puzzle.”

Comments
Pulkit Sharma (June 19, 2014 1:23 AM)
You can try optical tweezer based assays for studying antibiotic sensitivity or resistance mechanisms. I have worked on this myself with great success for integrin mediated force measurements with live mammalian cells. The same assay can be adapted to bacteria.
Reply »