Full-Color Printing With Aluminum Nanostructures As A Palette

Plasmonics: Arrays of metal-topped nanopillars give a broad palette of colors for printing high-resolution, fade-resistant images

By avoiding dyes or pigments, this printing technology produces images that do not fade, says Joel K. W. Yang, a materials researcher at the Agency for Science, Technology & Research, in Singapore, and the Singapore University of Technology & Design. It has potential applications in making anticounterfeit features on currency and goods, and in making color-change indicators for biosensors.

Conventional color printing involves overlaying dots of cyan, magenta, yellow, and black pigments in different ratios to get a spectrum of colors. In the new coloring scheme, each pixel is made of four nanopillars topped with metal disks. Nanoscale metal structures, like these disks, act as resonators, meaning that electrons on the metal surface oscillate at certain frequencies depending on the structure’s size. As a result, a metal nanostructure reflects only light of a frequency that matches its oscillating electrons. So by changing the size and the shape of the metal structures, researchers can produce different colors. 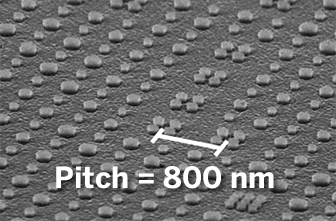 Yang and his colleagues first harnessed this effect, called plasmon resonance, for printing images in 2012 (Nat. Nanotechnol., DOI: 10.1038/nnano.2012.128). They used electron beam lithography to make 95-nm-tall pillars of hydrogen silsequioxane on a silicon substrate. They capped the pillars with a 20-nm-thick layer of gold or silver. The team created 15 different color pixels by varying the diameters of the pixel’s four nanopillars.

Now, by tuning the diameters and arrangement of the pillars in each pixel, Yang’s group has made a vast palette of colors. And to bring down cost, the team replaced the gold and silver disks with aluminum.

The researchers created aluminum-topped pillars with diameters ranging from 80 to 220 nm. They first created a basic 15-color palette in which each pixel contained pillars of the same diameter, arranged so that each pillar sat 400 nm from the other pillars’ centers. Then, by mixing pillars of different widths in the same pixel, they generated 100 more colors. Finally, by placing same-size pillars at different distances from each other, they produced an additional 200 colors, for a final palette of more than 300 colors. This allowed them to make tiny yet realistic reproductions of artwork images, such as Claude Monet’s “Impression, Sunrise.”

The aluminum pixels are stable for more than seven months, unlike the previous silver pixels, which oxidized and degraded within a week. But the downside, Yang says, is that the colors aren’t as vibrant as those of gold and silver pixels.

The overall method should be suitable for mass-patterning approaches such as photolithography and nanoimprint lithography, Yang says. To implement the technique practically, he imagines something along the lines of screen printing. Manufacturers could first use lithography to make a nanopillar array corresponding to a specific image, and then use it as a master template to stamp the pattern into a piece of metal.

This work is important because the researchers have achieved a complex color palette, says L. Jay Guo, an electrical engineer at the University of Michigan, Ann Arbor. The next step, he says, would be for the researchers to make the technique more cost-effective by adapting it to mass-printing techniques.