Sweetener Is Toxic To Fruit Flies 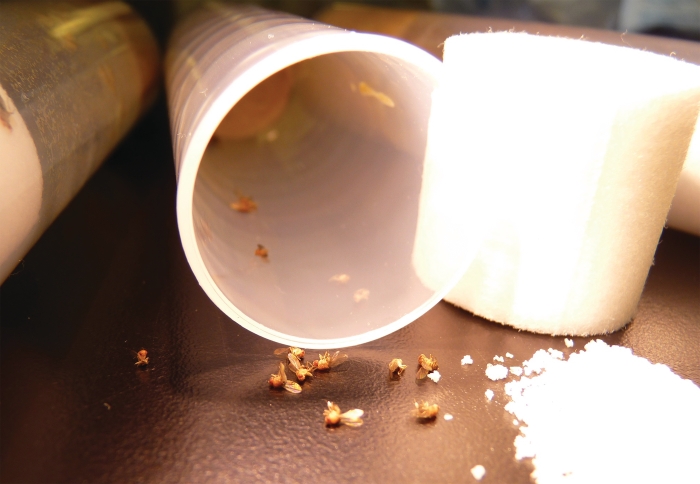 It’s not every day that the results of a sixth grader’s science fair project end up in a peer-reviewed journal article. But earlier this week, a research team at Drexel University published a study in PLoS One that was the brainchild of a 12-year-old (DOI: 10.1371/journal.pone.0098949). 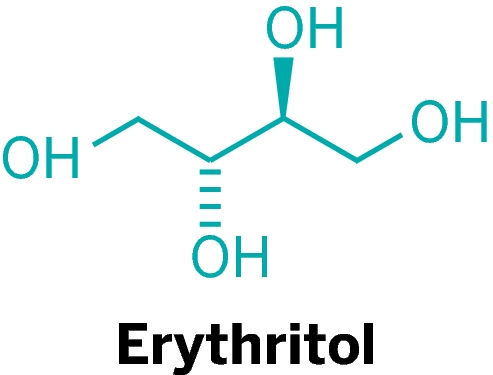 Daniel R. Marenda, Sean O’ Donnell, and colleagues reported that erythritol, the main ingredient of the sweetener Truvia, is toxic to Drosophila melanogaster fruit flies. Because erythritol is a naturally occurring sugar alcohol and because it isn’t harmful to people, the scientists think the compound holds promise as a human-safe insecticide. “Fruit flies are a major pest category,” Marenda says.

The discovery wouldn’t have been possible without Simon D. Kaschock-Marenda, who approached his dad three years ago to pitch an idea. Knowing that his dad was a neurobiologist at Drexel with access to a supply of fruit flies, the sixth grader proposed a science fair project: He wanted to feed a variety of sugars and sweeteners to flies and see how the insects fared.

One of the sweeteners father and son purchased from the supermarket for testing was Truvia, made by Minneapolis-based Cargill. The pair mixed that sweetener and a number of others with Drosophila food, put each in a container with adult fruit flies, and waited.

Almost a week later, Marenda’s son pointed out that the flies in the Truvia container had died, while the ones feeding off the other sweeteners were still alive. Thinking the result might be a fluke, the youngster and his father repeated the experiment, only to receive the same result. Flies raised on the Truvia-laced food survived for about six days, and flies fed table sugar lived around 40 to 50 days.

Realizing his son was on to something, Marenda moved the study from his home to his lab and called in O’Donnell, a biologist with expertise in insect behavior. Truvia is marketed as a natural sweetener extracted from the South American Stevia rebaudiana plant, so the scientists suspected that the ingredient killing the fruit flies was coming from the plant. “The literature is rife with stories of plants defending themselves with compounds toxic to insects,” Marenda says.

But fruit flies given food laced with Purevia, another sweetener derived from the stevia plant, didn’t react as they had to Truvia. Their lifespan was unaltered.

So O’Donnell sent Truvia off to be analyzed with high-performance liquid chromatography and got interesting results. “More than 90% of the Truvia was erythritol,” Marenda says.

Erythritol is a zero-calorie sweetener found in fruits and fermented foods. It acts as a bulking agent in Truvia, says Nicole Reichert, a Cargill spokeswoman. Because stevia leaf extract is about 200 times as sweet as sugar, she explains, erythritol helps provide “an ‘even’ sweetness level throughout the product.” She also notes that erythritol is Generally Recognized As Safe by the Food & Drug Administration and has been approved as a food additive around the globe.

To determine whether erythritol was indeed their culprit, Marenda, O’Donnell, and their team placed fruit flies in containers with increasing doses of erythritol. At the highest concentration the researchers tested—2 M erythritol—all the flies died after a day or two of feeding.

The researchers aren’t yet sure why erythritol kills fruit flies and leaves humans unharmed. But D. Eric Walters, a pharmaceutical sciences professor at Rosalind Franklin University, in Illinois, points out that the concept of species reacting differently to sweeteners isn’t new. “Xylitol is in zillions of products, including most sugar-free chewing gums, says Walters, who is also author of “The Sweetener Book.” “It’s perfectly safe for humans, but it can kill your dog.”

In the meantime, Marenda and O’Donnell have obtained a provisional patent for the use of erythritol as an insecticide for fruit flies and perhaps other insects. “We’re envisioning it as part of bait that insects might consume and take back to their nests,” O’Donnell says. He adds that this strategy looks promising because when the team gave fruit flies a choice between erythritol and sucrose, the insects consumed both options. “This suggests that you could deploy bait even in a situation where insects have access to other food,” he explains.

“Still, there’s a long way to go” before the compound could become an insecticide, says John E. Garst, a toxicologist and retired professor from the University of Illinois, Urbana-Champaign. The team would need to demonstrate that erythritol is nontoxic to beneficial insects such as bees, he says, and that it isn’t harmful to other animals such as birds.

“It was a fortuitous discovery,” Marenda adds, giving a nod to his son. Simon, who is now in the ninth grade, may not have a won a prize at his school’s science fair—there weren’t any given out—but he ended up with something even better: coauthorship on a certain PLoS One paper.

Toxicology
Mysterious kidney disease traced to plant toxins
Toxicology
US EPA charts path to reduce animal testing
Toxicology
Podcast: What we still don’t know about the chemical culprit in vaping illnesses
Share X
To send an e-mail to multiple recipients, separate e-mail addresses with a comma, semicolon, or both.
Title: Sweetener Is Toxic To Fruit Flies
Author: Lauren K. Wolf
Chemical & Engineering News will not share your email address with any other person or company.

laurenkwolf (June 12, 2014 9:17 AM)
Hi Robert, the researchers used pure erythritol in follow-up studies to confirm that it was the culprit. And in answer to your second question, this was something that surprised the researchers. They assumed, based on the way Truvia is marketed, that stevia is its main ingredient. But when they had it analyzed with HPLC, they found that erthyritol is actually the main ingredient. As Cargill states, they use it as a bulking agent. Another fun fact: Pure Via's main ingredient isn't stevia either. It's dextrose.
Reply »