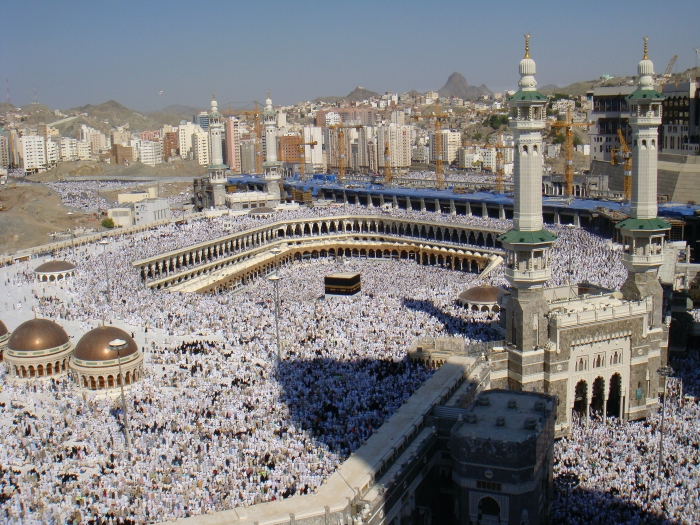 Every year millions of Muslims make a pilgrimage to Mecca called the Hajj to visit and pray at holy sites in and around the city. The traffic associated with this massive trek causes significantly elevated levels of air pollutants along the route, which could pose health risks to residents and pilgrims, a new study reports (Environ. Sci. Technol. 2014, DOI: 10.1021/es5017476).

“During Hajj, it’s like nothing else on the planet where you have 3 or 4 million people—a whole good-sized city—coming into an already existing city,” says Isobel J. Simpson of the University of California, Irvine. Also, gigantic masses of people end up driving to and from the same places over the span of four days, she says.

An international team of researchers led by Simpson and Omar S. Aburizaiza of King Abdulaziz University, in Saudi Arabia, wanted to look at how this yearly event changed air pollution levels. During the Hajj in October 2012, and then six months later, the Saudi researchers collected air samples in two-liter tanks in Mecca and at critical points along the pilgrimage route, including in two traffic tunnels. They shipped the containers to the U.S., where researchers used techniques such as gas chromatography and mass spectrometry, to measure the concentrations of carbon monoxide, methane, and volatile organic compounds in the air samples.

During the nonpilgrimage time, Mecca already has elevated levels of air pollution. Carbon monoxide levels are roughly 10 times higher in the city than in surrounding areas. But the researchers found, as expected, that during the Hajj the average levels of gasoline combustion products increase dramatically. The air pollutant concentrations were especially high within two traffic tunnels less than 1 km long that connect pilgrimage sites. For example, carbon monoxide levels were on average 80-fold higher than outside Mecca. And concentrations peaked at 57,400 ppb by volume within one tunnel, a level that previous studies have shown can be harmful to human health. In the tunnels, the team also observed high levels of i-pentane, consistent with gasoline evaporation, which can trigger ozone formation.

These results are notable, Simpson says, because the tunnels aren’t simply used by cars: People walk through the tunnels, and police officers and other workers spend many hours each day in the tunnels during the pilgrimage.

Though this is a pilot study, it provides data that could be useful for shaping new regulations, says David Parrish of the National Ocean & Atmospheric Administration, who was not involved with the research. “Saudi Arabia may well wish to consider implementing emission control policies,” he says.

Some measures for protecting human health are straightforward, Simpson adds. For example, the government could separate vehicle and pedestrian traffic within the tunnels to reduce the impact of pollutants.