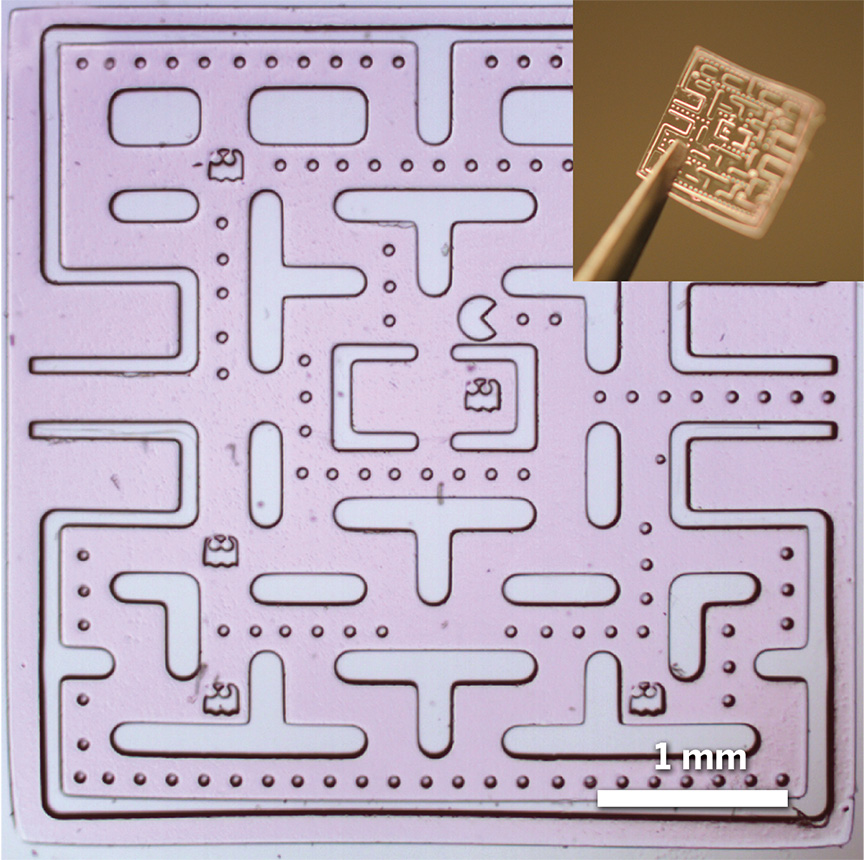 Microfluidic chips made from polydimethylsiloxane (PDMS) can act as casts to rapidly and inexpensively produce uniform particles for use in drug delivery or other applications. However, PDMS is soft, says Dae Kun Hwang of Ryerson University, in Toronto, and can sag if the channel in the chip is too wide. For this reason, the channels are designed to be, at most, 100 μm wide. So scientists haven’t been able to produce some larger structures, such as polymer sheets, with PDMS microfluidics.

To allow for wider microfluidic channels, Hwang’s team embedded glass slides in PDMS chips to prevent sagging. Using a strengthened chip with a wider channel, they first synthesized a membrane by placing an ultraviolet light underneath the chip, overlaid with a photomask shading the spots destined to become the membrane’s pores. The researchers streamed a solution of poly(ethylene glycol)diacrylate and a photoactivated cross-linking agent through the 8-mm-wide and 30-μm-tall channel. Then, they stopped the flow and flashed the light, triggering the material to stitch itself together to form a solid everywhere but in the pores of the membrane. Within milliseconds, the membrane formed and was quickly flushed out of the device by more solution, making room for the synthesis of the next membrane.

The researchers also employed more elaborate photomasks to build, for example, a maze reminiscent of a Pac-Man game, a three-dimensional scaffold for growing tissue, and a radio frequency identification (RFID) tag. The RFIDs don’t work that well now, Hwang says, because the polymer they’re using to cast the antenna isn’t particularly conductive. But they’re tweaking the recipe, he says.

Ionic Liquids
Chemistry in Pictures: Papa’s got a brand new solvent
Materials
Fluorescent materials are the brightest ever made
Biomaterials
Fruit’s metallic blue caused by lipid nanostructures
Share X
To send an e-mail to multiple recipients, separate e-mail addresses with a comma, semicolon, or both.
Title: Microfluidic Chip Fabricates Intricate Polymer Designs
Author: Erika Gebel Berg
Chemical & Engineering News will not share your email address with any other person or company.