Wastewater Reuse: A field study shows that carrots and sweet potatoes accumulate an anticonvulsant drug and a drug metabolite at potentially unsafe concentrations

Irrigation Issues
[+]Enlarge
Credit: Tomer Malchi
In an experimental plot, scientists in Israel irrigated sweet potatoes with treated wastewater to determine if the vegetables accumulated pharmaceuticals from the water. 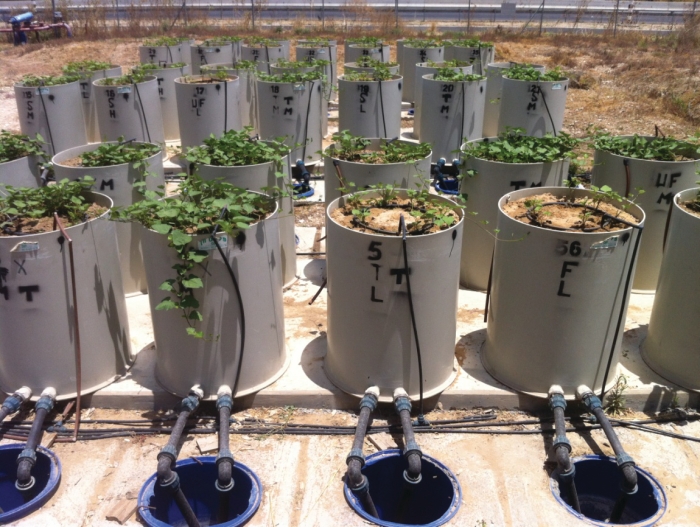 Credit: Tomer Malchi
In an experimental plot, scientists in Israel irrigated sweet potatoes with treated wastewater to determine if the vegetables accumulated pharmaceuticals from the water.

Faced with dwindling sources of freshwater across the globe, growing numbers of farmers are using wastewater to irrigate food crops. This wastewater, however, can contain trace amounts of pharmaceutical compounds excreted by people, so scientists want to know how much of the drugs make it into plants and onto dinner plates. A new study of root vegetables irrigated with treated sewage effluent finds that, although many drugs don’t accumulate at detectable levels, a couple can build up to concentrations that may exceed safe exposure levels (Environ. Sci. Technol. 2014, DOI: 10.1021/es5017894).

About half of Israel’s agriculture relies on irrigation with treated wastewater, and the practice is gaining ground in Africa, Asia, Mexico, and in parts of the U.S., including California and Arizona, says Tomer Malchi, a soil scientist at Hebrew University of Jerusalem. But only a few previous studies have gauged plant uptake of pharmaceuticals in a farm setting, he says, and these did not estimate the health risks to people nor look at drug metabolites.

Malchi and his colleagues, including Benny Chefetz, decided to track 14 common pharmaceuticals and two metabolites of one drug in irrigation water and then in the edible parts of crops. The scientists grew sweet potatoes and carrots outdoors in 0.5-m3 plots irrigated with the same water used by local farmers: treated wastewater from the city of Kiryat Gat, Israel. They measured concentrations of the compounds in the irrigation water, soil, and plant tissue using liquid chromatography/mass spectrometry. In the two vegetables, the scientists did not detect any drugs except for caffeine and the epilepsy drugs lamotrigine and carbamazepine. These nonionic organic molecules cross cell membranes easily and thus are more likely to be taken up by plant roots. They also found 10,11-epoxycarbamazepine, a metabolite of carbamazepine. Concentrations of the compounds ranged from 0.013 to 4.130 ng per g of the vegetables’ fresh weight.

Malchi and his colleagues then determined the threshold of toxicological concern (TTC) for the compounds, a method that the European Food Safety Authority uses to establish safe levels in food of chemicals that lack firm toxicological data. The method assigns compounds to one of four levels of potential toxicity, each of which establishes an acceptable daily consumption value, above which there would be a possible risk to human health.

On the basis of the concentrations detected in the vegetables, “an adult would have to consume hundreds of kilograms of sweet potatoes or carrots from our study daily to reach the TTC level for caffeine or carbamazepine,” Malchi says. For 10,11-epoxycarbamazepine, a child would need to eat 90 g/day of sweet potato leaves, a popular food in Asia and Africa, to exceed the TTC level. But that same child could surpass the TTC level for lamotrigine by eating just half a carrot in a day.

Malchi says the data suggest the need for toxicological studies of these detected pharmaceuticals “to determine their exact level of toxicity, so that acceptable levels in treated wastewater for irrigation can be established.”

The study is likely the first time that the TTC has been used to assess health risks from pharmaceuticals in food crops, says Chad A. Kinney, an analytical chemist at Colorado State University, Pueblo. He thinks it’s a good approach for screening substances for further study. The study also suggests the need to look at metabolites—not just parent compounds—when determining the risks of using treated wastewater in agriculture, Kinney says.

Persistent Pollutants
EU agency sets limit on PFAS in food
Persistent Pollutants
EU science advisers recommend lower safe level﻿ of dioxin, some PCBs to consume in food
Water
To monitor the health of cities’ residents, look no further than their sewers
Share X
To send an e-mail to multiple recipients, separate e-mail addresses with a comma, semicolon, or both.
Title: Root Vegetables Irrigated With Treated Wastewater Can Take Up Certain Drugs
Author: Janet Pelley
Chemical & Engineering News will not share your email address with any other person or company.

Comments
Ron Zukowsky (August 2, 2014 11:31 AM)
are there similar studies for uptake from manure and livestock waste in cereal crops?
Reply »

Tomer Malchi (August 6, 2014 2:13 AM)
There are a few studies that examine uptake from bio-solids. There are also studies that look at forage crops and cereals. None of these studies have applied the TTC or examined such a wide range of PCs. You can find references to these different studies in the article.
Reply »

Tomer Malchi (August 6, 2014 2:19 AM)
In Israel and around the world reclaimed waste water is being used for frequently for greater types of crops (including root crops). The biological parameters and standards for reuse that determine if the water quality is high enough do not take into account the concentrations of PCs. Furthermore greater concentration in leaves shows that beyond the root crop the consumption of leaves requires further monitoring.
Reply »

Roman (August 8, 2014 4:36 AM)
Years ago my colleagues published a similar study (not referenced in the article by Malchi at el. which at least partly answers Ron's question and includes a health risk assessment too)

Abstract: Medicines play an important role in the treatment and prevention of disease. Whereas the side effects on human and animal health resulting directly from treatment have been widely documented, only recently have the occurrence and fate of medicines in the environment and the potential consequences for human health been recognized as an issue warranting consideration. Medicines have been shown to be released to soils and to persist in the environment. This study was performed to investigate the potential for a range of veterinary medicines to be taken up from soil by plants used for human consumption and to assess the potential significance of this exposure route in terms of human health. Soil analyses indicated that, for selected substances, measurable residues of these are likely to occur in soils for at least 5 months following application of manure containing these compounds. Experimental studies on the uptake of veterinary medicines into carrot roots (tubers) and lettuce leaves showed that only florfenicol, levamisole, and trimethoprim were taken up by lettuces, whereas diazinon, enrofloxacin, florfenicol, and trimethoprim were detected in carrot roots. Measured concentrations in plant material were used to model potential adult human exposure to these compounds. Although exposure concentrations were appreciable in a few instances, accounting for ?10% of the acceptable daily intake values (ADI), all were lower than the ADI values, indicating that, at least for compounds with properties similar to those considered here, there is little evidence of an appreciable risk. This exposure route may, however, be important when veterinary medicines have a very low ADI, at which they elicit subtle effects over prolonged periods, or when exposure is occurring via a number of routes at once. Although degradation products (produced in the soil or the plant) were not measured, it is possible for some substances that these could increase the risks to consumers.
Reply »

Lewis Perdue (August 9, 2014 11:11 AM)
Evaluation should extend to concentrations other an standard NOAEL levels given the possibility that some if those chemicals may be endocrine disruptors.
Reply »