GETTING INSIDE
[+]Enlarge
Credit: ACS Chem. Biol.
The overlap between the natural fluorescence of cyanobacteria (red) and that of the probes (green) demonstrates that the probes enter living microbes. 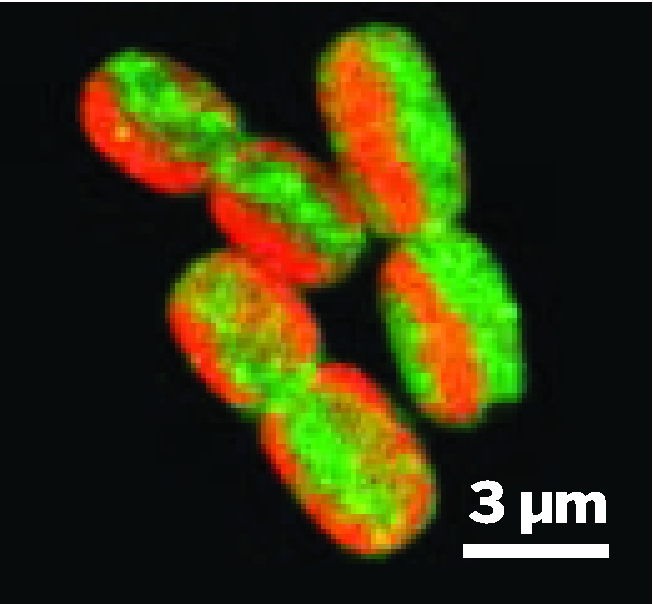 Credit: ACS Chem. Biol.
The overlap between the natural fluorescence of cyanobacteria (red) and that of the probes (green) demonstrates that the probes enter living microbes.
HARD AT WORK
[+]Enlarge
Credit: Courtesy of Aaron Wright
Synechococcus cyanobacteria inside a 7.5-L bioreactor at Pacific Northwest National Laboratory. 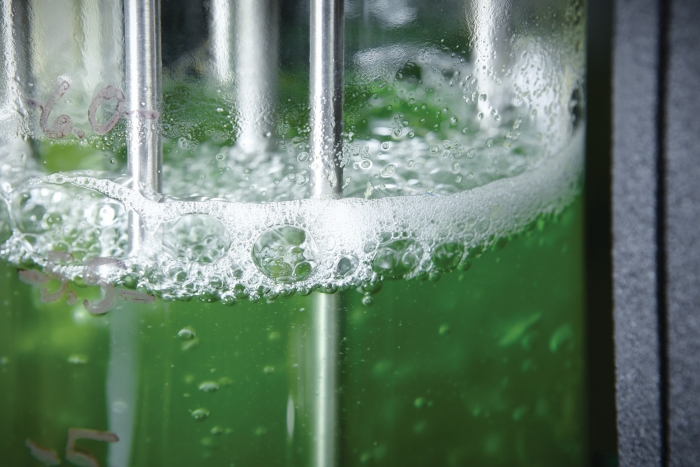 For something so tiny and brainless, cyanobacteria have proven awfully hard to push around. The blue-green microbes are promising hosts for biofuel production. Yet attempts to boost output by engineering the microbes’ genomes rarely work in big bioreactors. Researchers at Pacific Northwest National Laboratory think setbacks happen because the biochemistry that regulates fuel compound production isn’t fully understood. At the American Chemical Society national meeting in San Francisco, they presented molecular probes that might help close that knowledge gap.

The probes reveal metabolic pinch points regulated by oxidation and reduction of cysteine side chains on enzymes. Such reactions are commonplace and help cells respond to their environment, including the stresses of being coaxed to make biofuels. The probes covalently label reactive cysteine amino acids on proteins inside living cyanobacteria, but only when the cysteine thiol group is in its reduced form. “We want to identify proteins where redox chemistry acts like a switch, and where keeping that switch on keeps production of your hydrogen or alkane fuel flowing,” says Aaron T. Wright, who led the research. 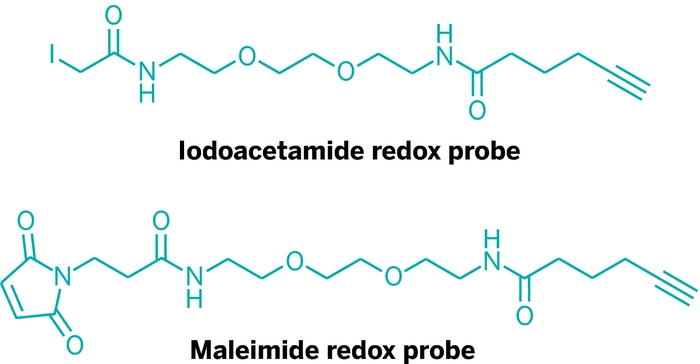 Natalie C. Sadler, who presented the work in the Division of Biological Chemistry, and her colleagues used confocal microscopy to demonstrate that the probes enter Synechococcus cyanobacteria. They starved the microbes of nutrients or, because the microbes use photosynthesis, switched between light and dark. Both are extreme instances of what might happen inside a bioreactor. The team tracked changes over time in reduced and oxidized cysteines. Their list of redox-sensitive proteins includes several enzymes already known to be redox-regulated, but others on the list, including gene transcription regulators, were not (Front. Microbiol. 2014, DOI: 10.3389/fmicb.2014.00325 ; ACS Chem. Biol. 2014, DOI: 10.1021/cb400769v).

The main advance of the work, says University of California, Berkeley, chemical biologist Christopher J. Chang, is the ability to profile oxidized and reduced cysteines in live intact cells. Researchers have had to crack cells open to analyze these features, he explains, but this “can shift or alter the redox balance of the cell.”

Not all the enzymes the team found are necessarily major metabolic switches, Wright says. “So now we’re dying to dig in and see which ones truly are.”