ALL IN THE FAMILY
[+]Enlarge
Tramadol (left) was designed to contain the essential structural elements of morphine (right). Now, chemists are debating whether tramadol, like morphine, is made in nature.

Tramadol (left) was designed to contain the essential structural elements of morphine (right). Now, chemists are debating whether tramadol, like morphine, is made in nature.

For the duration of human existence, plants have been sources of medicine. On rare occasions, a drug thought to be a human invention turns out to have been from nature all along. 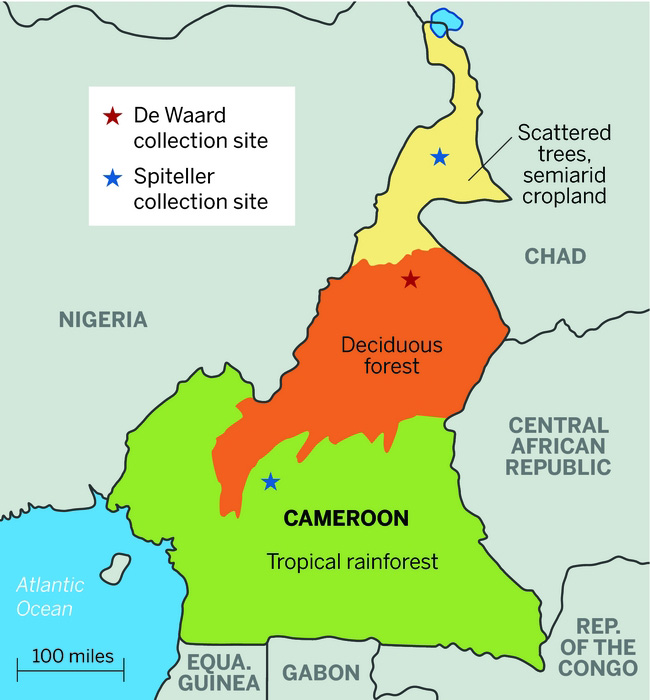 Last year, researchers made the case for adding another drug to that short list. They detected tramadol, a synthetic narcotic on the market since the 1970s, in the roots of an African medicinal plant (Angew. Chem. Int. Ed. 2013, DOI: 10.1002/anie.201305697). It seemed to be a tale about nature’s many secrets.

Until last Friday, that is, when another team’s results complicated matters. The new report concludes that tramadol arrived in the plant’s roots because of human-caused contamination, in particular, from livestock excreting tramadol near where they graze (Angew. Chem. Int. Ed. 2014, DOI: 10.1002/anie.201406639).

Outside experts have yet to be convinced by either team’s evidence and are holding out for additional experiments before making conclusions.

The story begins with Michel De Waard, who has long been fascinated with natural remedies. At France’s Grenoble Neuroscience Institute, he’s known for studying the effects of animal venom peptides on calcium ion channels. He launched the start-up Smartox Biotechnology to develop venoms as therapeutics. A collaborator in Cameroon drew De Waard’s attention to a different type of medicine—a plant called Nauclea latifolia, commonly known as the African peach or pincushion tree. Traditional healers use the plant’s root bark for a multitude of ailments, including pain relief.

Researchers had previously detected anti-inflammatory and antimalarial compounds in the plant, but De Waard, a neuroscientist, joined forces with chemists and pharmacologists to see if other teams had missed something.

When tramadol turned up in the plant at rather high levels (approximately 0.4% by weight of dried root bark), De Waard says, his team took pains to ensure the samples hadn’t been unintentionally contaminated with the synthetic drug. Three different labs analyzed different samples collected at a national park in northeastern Cameroon, each at different time points, he says. A collaborator also demonstrated that the nitrogen isotope ratios of tramadol found in the plant are different from commercially available tramadol samples, which would suggest the tramadol was synthesized biologically. “It was not that surprising to me that a plant could make tramadol,” De Waard says. “Morphine is a natural product,” and tramadol was designed to contain that painkiller’s essential chemical groups, he points out.

De Waard’s results were surprising to Michael Spiteller at Dortmund University of Technology, in Germany. Together with an international team of collaborators, he reported on Friday that the appearance of tramadol in the pincushion tree is likely a result of human-caused contamination.

Spiteller specializes in analyzing environmental contaminants such as pesticides in water and soil. He wasn’t convinced by the isotope analysis. He contacted De Waard for a root sample he could analyze independently, and reached out to the German Academic Exchange Service for funding and for African collaborators. His colleagues sampled from Cameroon’s semiarid far-north region as well as its southern rain forest—completely different locations from De Waard’s.

Spiteller confirmed the 0.4% tramadol content in De Waard’s samples. But Spiteller’s own samples were strikingly different. Those from the north had low amounts of tramadol—about 10,000 times lower than what De Waard detected. Samples from the south had no detectable tramadol at all. At that point, Spiteller started thinking about contamination as a possible explanation for the discrepancy.

MADE IN THE SHADE
[+]Enlarge
Credit: Courtesy of Michael Spiteller
People stand under a pincushion tree in Houdouvou, a village in Cameroon’s semiarid far northern region where Spiteller’s team collected root samples. 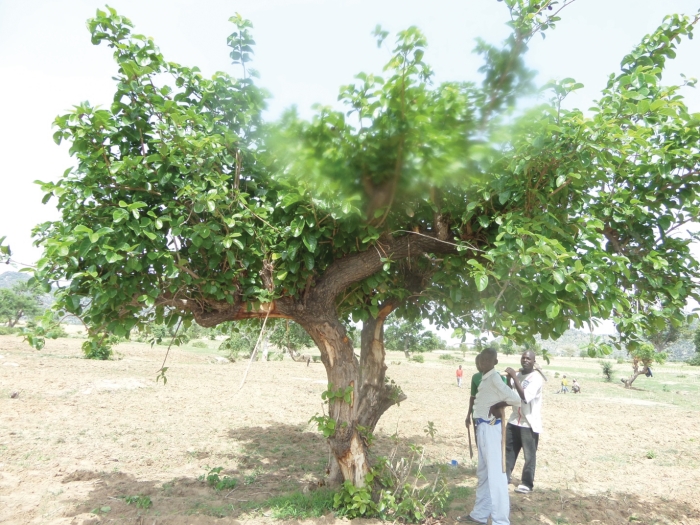 His collaborators in Cameroon chatted up local farmers. Sure enough, they learned that farmers in the north feed tramadol to cattle used as beasts of burden so they don’t tire as easily. Farmers in the country’s south don’t report the practice. High-resolution mass spectrometry of the northern pincushion tree roots, as well as water and soil samples near the trees, confirmed the presence of mammalian tramadol metabolites. Roots from other nearby tree species contained tramadol as well. Spiteller’s team thinks that cattle dosed with tramadol urinated and defecated under the shade of pincushion trees, and the synthetic tramadol was then taken up by the plant roots.

The farmers’ story is plausible, though difficult to prove, says Marcy Jan Souza, who studies tramadol at the University of Tennessee College of Veterinary Medicine. People give pain medications to cattle to improve work ability, but tramadol is not used in cattle in the U.S. Tramadol metabolism varies widely between animal species and relatively little is known about cattle metabolism specifically, Souza says, so any metabolites in roots and soil should be interpreted with caution.

“We wouldn’t have published this story if we weren’t sure we were looking at contamination,” Spiteller says. His collaborators have obtained tramadol pills in Nigeria, which borders Cameroon. They hope to obtain an isotope ratio to compare with that of the root samples. As for the drastically different tramadol levels in De Waard’s samples, Spiteller suggests De Waard may have simply stumbled upon a location where more tramadol had been excreted.

With the stark differences in tramadol content, that would amount to a lot of manure, De Waard says. Bénoué National Park, where his colleagues sampled, is a UNESCO-designated biosphere reserve where farmers are unlikely to reach. Differing plant ages, symbiotic fungi or microbes, and Cameroon’s varied climate could be responsible for the discrepancy in the teams’ results, De Waard suggests. “I still think that tramadol is of natural origin.”

“I’m pretty convinced by the new paper, but they haven’t completely nailed it,” says

A. Douglas Kinghorn, a natural product expert at Ohio State University. He praised De Waard’s work last year but says Spiteller’s report resurfaced doubts he’d had. Kinghorn points out that the tramadol in De Waard’s samples is an equal mixture of enantiomers. Although that’s not unheard of in nature, it’s a big coincidence that out of four possible configurational forms, the plant makes the exact same ones as are found in synthetic tramadol.

In addition, Kinghorn is surprised that tramadol or its precursors weren’t found in the pincushion tree’s leaves. Because of the chemical energy chlorophyll provides, “in general the leaves are where the action is” for natural product biosynthesis, he says. “Roots are typically storage organs for natural products synthesized by the plant.”

He wishes Spiteller’s collaborators had sampled from the same location as De Waard’s, and had deposited samples of all the species they studied in a herbarium so that other researchers could verify the results. “Without that there’s a lingering question mark.”

“Neither team’s argument is 100% convincing to me,” says Kirk Gustafson, natural products chemistry group leader at the National Cancer Institute in Frederick, Md. Someone needs to reconcile the huge differences in tramadol levels between the different samples, he says. He’d like to see plant feeding studies with isotope-labeled or radiolabeled compounds. If labeled tramadol fed to cattle ends up in plant roots, then that would be strong evidence that the tramadol is a contaminant. But if the plant can use labeled precursor compounds to make tramadol, that would suggest tramadol is natural, he says. “If I had to bet money on this, I’d go with contamination,” Gustafson says. “But without stronger evidence it’s hard to say for sure.”

Feeding experiments have been planned but haven’t yet commenced, says De Waard’s collaborator Richard J. Robins, a natural products biochemist with France’s National Center for Scientific Research (CNRS). His team’s latest results measure the isotope ratio at each individual carbon in tramadol, instead of just the whole compound. “Our data definitely give support to a natural origin, but I’m open to all possibilities,” Robins says.

“I’m glad science always leaves some question marks,” Robins adds. “Otherwise, we wouldn’t have a job to do.”

This article was corrected to rectify incorrect use of the term "enantiomer". Tramadol has two chiral centers and therefore can have four different configurational forms, not four enantiomers.

Comments
István Ujváry (September 18, 2014 9:57 AM)
The finding that tramadol isn't a genuine natural product is not unexpected. In a recent review (http://www.iss.it/binary/publ/cont/ANN_14_01_04.pdf) I speculated that tramadol detected in the root bark of Nauclea latifolia (or N. esculentus) was a further example of the so-called 'semi-natural products', which are defined as man-made substances that are (re)isolated from natural sources. The only question that I could not answer was the true origin of this synthetic drug. The elegant detective work of Kusari, Spiteller and their colleagues now provid a solution.
Reply »