PAPER POWER
[+]Enlarge
Credit: Nano Lett.
A new flexible battery is made up of two sheets of paper, one acting as a cathode and the other as an anode (far left). Each paper is made of nanofibers of cellulose (yellow) and backed with electrodes made up of carbon nanotubes (black) tangled up with lithium-based electrode materials (purple and green blobs). As the battery charges and discharges, lithium ions (orange) move through the nanocellulose, and electrons (blue) flow between the electrodes. 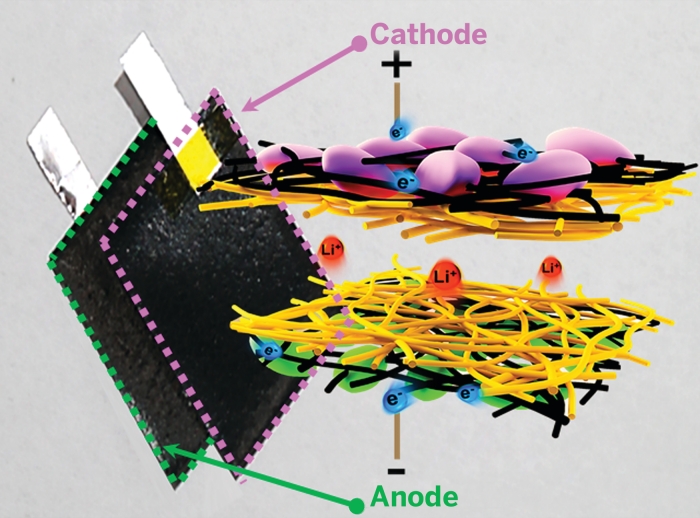 Credit: Nano Lett.
A new flexible battery is made up of two sheets of paper, one acting as a cathode and the other as an anode (far left). Each paper is made of nanofibers of cellulose (yellow) and backed with electrodes made up of carbon nanotubes (black) tangled up with lithium-based electrode materials (purple and green blobs). As the battery charges and discharges, lithium ions (orange) move through the nanocellulose, and electrons (blue) flow between the electrodes.

Over the past several years, materials scientists have worked on developing new battery materials. For example, researchers have developed nanomaterials for electrodes that store more energy, and others that can yield flexible batteries. Although new battery materials are important, Sang-Young Lee, a chemical engineer at Ulsan National Institute of Science & Technology (UNIST), in South Korea, saw an opportunity to make progress by trying a novel battery architecture. So far, he says, researchers haven’t done much to change the basic design of batteries—two energy-storing electrodes separated by a polymer membrane, bathed in an electrolyte, and sandwiched by current collectors.

To build the new flexible battery, Lee—along with Sun-Young Lee of Korea Forest Research Institute, in Seoul, South Korea, and their coworkers—starts with wood. At high pressure, the researchers homogenize wood cellulose to produce fibers that are nanometers in diameter and micrometers long. They suspend this nanocellulose in water then turn it into paper using vacuum filtration. Next, they take two sheets of this paper and coat one side with a water-based suspension of carbon nanotubes and conventional powdered battery-electrode materials, either lithium iron phosphate to make the cathode or lithium titanium oxide to make the anode. The nanocellulose layers act as the separator membrane in the finished battery. The two coated papers are put together, with the electrode layers on the outside, then submerged in an electrolyte and sealed in a plastic package to make a complete battery.

DO THE TWIST
[+]Enlarge
Credit: Nano Lett.
Researchers can repeatedly bend a paper battery, powering a light-emitting diode in this photograph, with no interruption in performance. 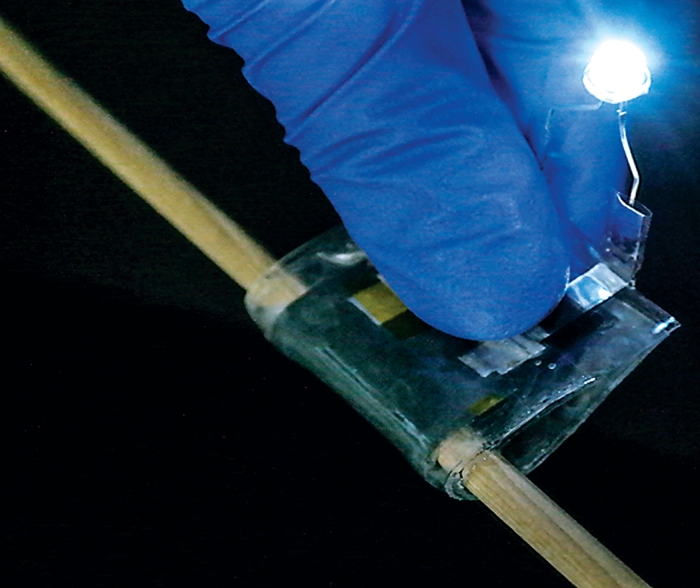 Credit: Nano Lett.
Researchers can repeatedly bend a paper battery, powering a light-emitting diode in this photograph, with no interruption in performance.

The battery is just 110 µm thick, not counting the packaging, and it’s flexible and bendable. Depending on the level of electric current, it can charge two to four times faster than a conventional lithium battery and can provide two to four times more power in a given time. While other flexible batteries suffer performance degradation after flexing, UNIST’s Lee says, this one does not. It shows no loss in function after repeated twisting and bending during 50 charging-discharging cycles.

Liangbing Hu, a materials scientist at the University of Maryland who is also working on cellulose batteries, says Lee’s devices get a performance boost by combining nanomaterials in a totally new architecture. The new battery charges quickly because the researchers used the nanotube mats instead of polymer binder glues to hold together the energy-storing materials. Lithium ions can move more readily through the porous mats than they do through conventional electrodes, where the glues act as roadblocks.

Carbon nanotubes are also highly conductive, removing the need for the bulky metal charge collectors that sandwich traditional batteries. Both the nanotubes and the nanocellulose contribute strength and flexibility to the battery. And the nanocellulose separators are more porous and more absorbent than conventional polymer separators, soaking up more electrolyte and letting ions flow freely.

Lee says he’s currently studying how varying the dimensions of the nanocellulose fibers might further improve the battery’s performance. He’s also working on replacing the conventional electrode materials with new ones to improve the total energy storage.