Ribozyme Swaps Genes With A Flip Of A Switch

Gene Therapy: Researchers developed a ribozyme that targets and replaces genes only in the presence of a specific small molecule, offering a more controlled approach to gene therapy

One serious limitation with current gene therapy strategies is a lack of control. When researchers deliver a gene to replace one linked to disease, there’s no way to turn on the therapeutic gene at the right place and the right time, limiting efficacy and potentially triggering serious side effects. In an effort to take control, researchers developed a catalytic RNA—a ribozyme— that exchanges genes only in the presence of a specific small molecule (ACS Chem. Biol. 2014, DOI: 10.1021/cb500567v).

Side effects arise in gene therapy when the therapeutic gene inserts itself into genes not linked to disease, possibly disrupting the function of essential genes or activating a cancer-causing gene. Seong-Wook Lee of Dankook University, in South Korea, and colleagues wanted to gain more control over gene splicing through a ribozyme they could turn off and on.

The researchers specifically looked at group I introns, which are large ribozymes that splice themselves out of strands of RNA. Scientists have converted group I introns into ribozymes that can bind to and replace a gene in a strand of target RNA. These so-called trans-splicing ribozymes carry a replacement gene at their tail ends and stitch it into the RNA strand in place of the target gene. In previous work, Lee developed a trans-splicing ribozyme that swapped a cancer-associated gene with a gene that damaged cancer cells (Mol. Ther. 2005, DOI: 10.1016/j.ymthe.2005.06.096).

To add an on-off button to such ribozymes, Lee and his group borrowed a feature of ribozymes found in some bacteria, fungi, and plants. Those catalytic RNAs regulate gene expression only when activated by a small molecule. Lee saw the opportunity to develop inducible gene therapy by building one of these so-called riboswitch features into his trans-splicing ribozyme.

The switch consisted of an aptamer, an RNA strand that can bind a certain small molecule. For this proof-of-principle experiment, the researchers selected an aptamer that binds theophylline, which has a structure similar to caffeine. The researchers analyzed their ribozyme’s crystal structure to identify areas that could accommodate an aptamer without compromising function. They wanted binding of the small molecule to shift the overall conformation of the ribozyme from an inactive to an active state. After testing multiple RNA sequences in test tubes, the researchers settled on one that reliably swapped genes in the presence of theophylline but not caffeine.

To test their approach in cells, the researchers designed their ribozyme to target the gene for human telomerase reverse transcriptase. Their ribozyme, when activated, would swap out this gene for one encoding a protein that would decrease the viability of the cells. They incorporated their ribozyme into a viral vector and then infected cultures of human cancer cells. Adding theophylline to the cultures reduced cell viability by more than 60%, but caffeine and buffer had little effect, demonstrating the selectivity of their strategy. Using reverse transcriptase polymerase chain reaction, the researchers checked the cultures for the replacement gene, finding four times as much of the product in theophylline-treated cultures as those receiving caffeine or buffer.

Yingfu Li of McMaster University, in Ontario, says using a small molecule to regulate gene splicing is a key and novel advance for the field. However, he says, an ideal strategy would link the small-molecule inducer to a disease. For example, the ligand could be a molecule specific to cancer cells. Lee is working toward this and has started to develop ribozymes with aptamers that work with a range of small molecules found in cells. 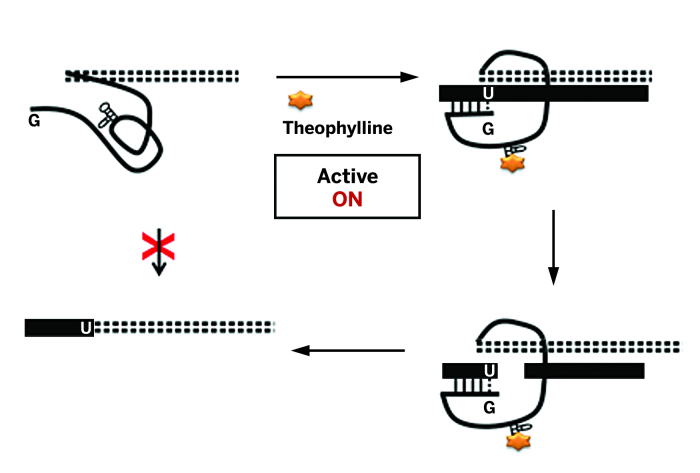 Credit: ACS Chem. Biol.
Researchers designed a catalytic RNA, or ribozyme, (black line, top left) that is activated by theophylline (yellow star). Once activated, the ribozyme binds to a target RNA strand (black rectangle, top right). It then cleaves a gene from the target RNA molecule (bottom right) and swaps it for a part of itself—a replacement gene on the ribozyme's tail (dotted rectangle). The resulting gene (bottom left) is then ready to be expressed by the cell.
Chemical & Engineering News
ISSN 0009-2347
Copyright © 2020 American Chemical Society