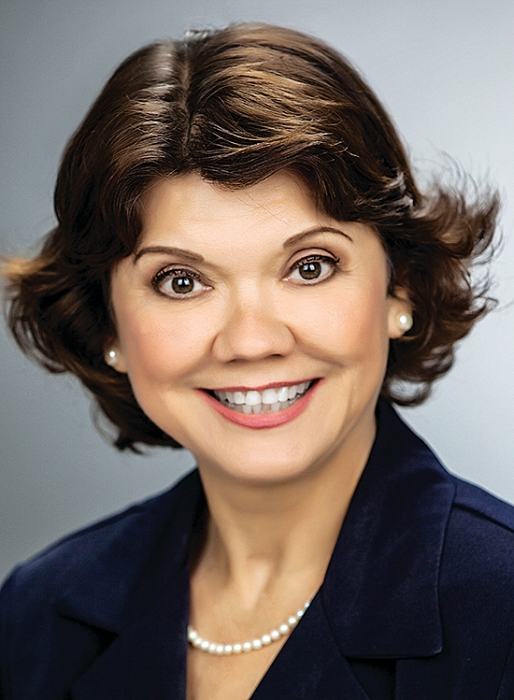 Donna J. Nelson, an organic chemistry professor at the University of Oklahoma, has been elected the 2015 American Chemical Society president-elect by members of ACS. Nelson will serve as president of the society in 2016 and immediate past-president in 2017; she will also serve on the board of directors during that time. 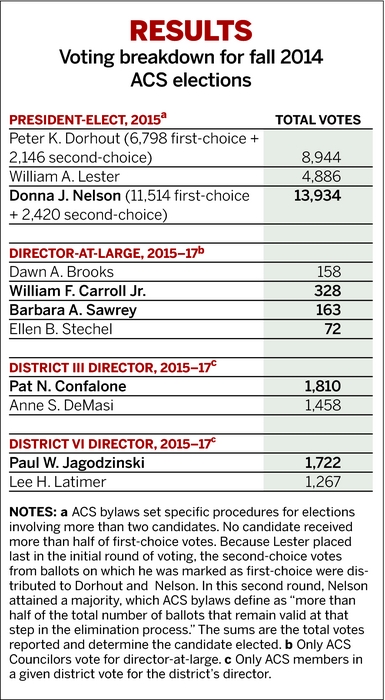 Nelson won a three-way race, receiving more votes than Peter K. Dorhout, dean of arts and sciences at Kansas State University, and William A. Lester Jr., professor of the graduate school at the University of California, Berkeley. The society, which publishes C&EN, also elected or reelected four other board directors.

Nelson calls the role “a great honor and even larger responsibility.”

“My number one priority is jobs and careers,” she says. “Simultaneously, I will work to create a deeper understanding of science’s contributions to society. I believe we can build a real appreciation for science and scientists that will bring numerous dividends to industry, research, and education.”

Communicating with the public about the benefits of chemistry to the world is not the job of one person, Nelson says. “I call on all ACS members to speak out about what we do and the benefits that science and scientists contribute.” She will be the second ACS president who is of Native American heritage, after Nancy B. Jackson, who served as ACS president in 2011. 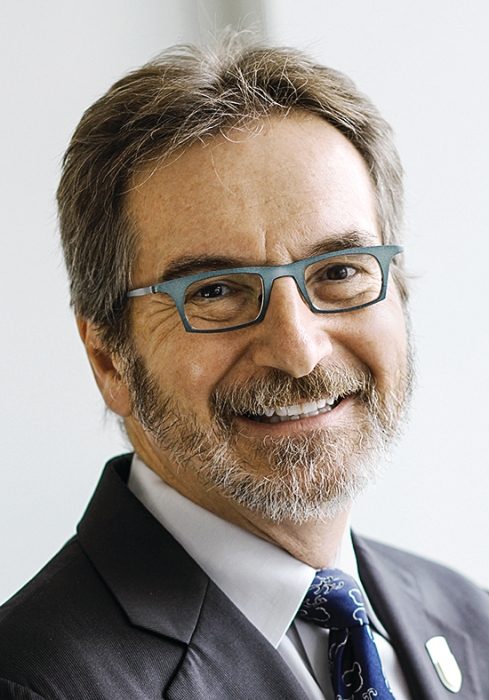 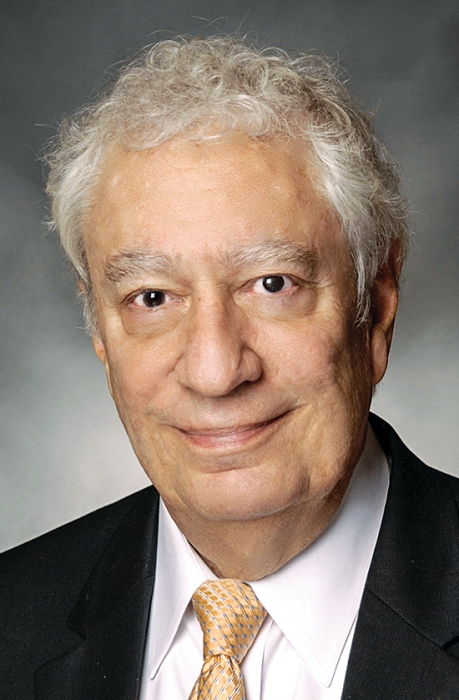 In 2010, Nelson was named an ACS Fellow, an honor that recognizes ACS members for outstanding achievements in and contributions to science, the profession, and ACS. She has held numerous leadership roles within ACS. She has also served as a science adviser to the television show “Breaking Bad.” 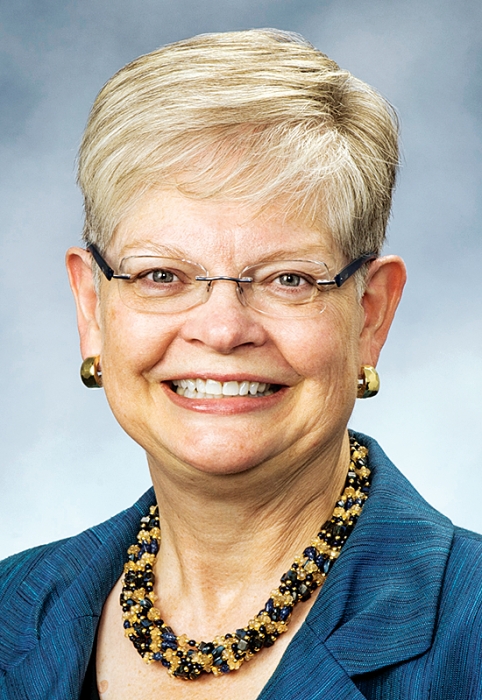 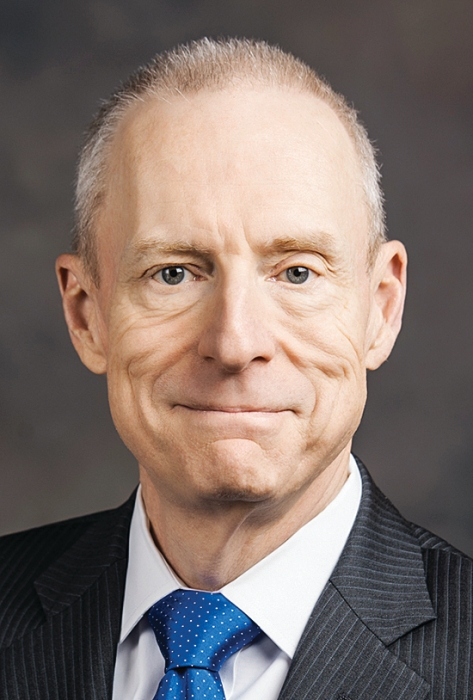 In elections for at-large director, incumbents William F. Carroll Jr., vice president at Occidental Chemical, and Barbara A. Sawrey, dean of undergraduate education at UC San Diego, secured their seats, defeating Dawn A. Brooks, adviser for diabetes clinical development at Eli Lilly & Co., and Ellen B. Stechel, professor of practice in the department of chemistry and biochemistry at Arizona State University.

Voter participation for president-elect was higher than last year, totaling nearly 15% of eligible voters, defined as ACS members in good standing who joined the society no later than August. Some 23,198 valid votes were cast for president-elect.

Additional information about the winners can be found in the candidates’ statements (C&EN, Sept. 8, page 31).

Comments
Md. Shahajahan Kutubi (November 18, 2014 7:14 PM)
Congratulation. Your success at every step will shine the ACS and all members more brightly. I am proud of you as chemist of organic synthesis and catalysis field.
Reply »

William Rubin (November 20, 2014 1:02 PM)
Very pathetic voter turnout. With over 161,000 ACS members, only a very small portion voted. Here are the percentages of members who voted for each office:

With such a small sampling, I wonder if this is actually an accurate (and thus scientific) representation of all ACS members' wishes.
Reply »

Alan M. Ehrlich (November 20, 2014 3:30 PM)
Mr. Rubin. I don't understand your arithmetic. The article states about 15% of the membership voted, approximately 24,000 out of approximately 160,000 members. That number is, in my experience, similar to other professional societies that I have belonged to, and higher than some where only one nominee is placed before the membership. Further, the District Directors are elected only by members residing in that District, and each District area is adjusted occasionally so they all are equal size - about 26,000 members. So the District Director voting was a bit under 15%. The Directors-at-Large are elected by Councilors. Each Councilor may vote for two of the candidates. If each Councilor who voted did vote for two, that participation is about 70%. If some Councilors voted for only one candidate, the participation was even higher.
Reply »

Margaret Phillips (November 21, 2014 4:26 PM)
An election is not the same as a sample. A sample is a means to obtain a statistical representation of a population. In an election, every eligible member of the population has the opportunity to express a preference. Given that voting was easy to do, can we not safely infer that more 90% of ACS members simply had no interest in voting or no preference among the candidates?
Reply »

William Wagner (November 21, 2014 8:04 PM)
I agree the voting was pathetic. I congratulate the officers and thank those who voted without worry of "validity "....This. was an election, not anW assay.
Reply »

Phillip D. Bass (November 22, 2014 12:52 PM)
I am absolutely ashamed to be a member of a society in which scientific achievement is disregarded! Performing stoichiometric calculations at the behest of a pop culture exploitation of the depths of evil that our professional organization secretly harbors IS NOT an adequate qualification for candidacy of the president of the ACS! ABOMINABLE DISGRACE! What has been clearly established for me in this particular election is an inversely proportional relationship between qualifications of candidates and votes recieved by them. With a heavy heart and great dismay I shall allow my "last chance to protect your years of service" notice to remain unopened and expire. Such is the face of politics, I suppose; BOTOX and bullshit are a match made in hell on earth. I send my condolences to both William A. Lester Jr. and former Senator Mark Udall; the latter of whom I sympathize with in his discretion to decline political debate. Finally, I wish to expound on the commentary and statistics presented by William Rubin. "Pathetic" is an extreme euphemism. I spent ample time with a colleague whose lips often pursed this word with vigorous disdain for the state of affairs of our peers, our inability to effectively interact within our discipline, and our practice in general. While I maintain a deep respect of benevolent scientific endeavors, I feel compelled to express disheartenment with the community at large. We have been splintered, shattered, and divided. As such, we have fallen and lie in pieces of individual punctuated solidarity, devoid of a unified or meaningful purpose. I propose that we turn up the heat and allow our boundaries to diffuse into one another, becoming once again the vivacious melting pot that is so often referenced as symbolic of America! I feel like I am suffocating in a dewar of liquid nitrogen while my body crystallizes along with the rest of you. We are about to be thrown off of the cliff of privilege and shattered upon the stalagmites of stagnancy. Perhaps we may be gently removed from cryogenic stasis and slowly brought back to room temp without excessive damage. If all else fails, please at least have the decency to orient my passage through the n-axial inverter such that I might interact favorably with the universe within which I will be cast.
With deepest sincerity and concern,
Phillip Bass
Reply »

D K Weerasinghe (November 24, 2014 3:27 PM)
Congratulations, I am confident that you will serve us the membership, the chemistry practitioner, the public and the world needs to keep our honorable vocation honorable. I am proud of having voted for you – a fellow Organic Chemist.

As a former AgFd Division Chair , a wana be Teacher and an educationalist, if there is anything I can do, just ask and you got it.

Wish you and the family a Peaceful, happy Gobble Gobble day. Take care

David Kessel (December 5, 2014 6:12 PM)
There appears to be some discontent with the ACS election results. I can understand the concern about the sparse vote, but remember that the result is of far less consequence than the recent Congressional and Gubernatorial elections. I am happy to note that the President of the ACS is not in a position to do much harm and anyhow my sympathies automatically go to anyone living in Oklahoma.
Reply »