A VERY SMART PHONE
[+]Enlarge
Credit: ACS Nano
A fluorescence microscope attachment on a standard smartphone (left) can image individual DNA strands (middle) and assess the distribution of lengths in a sample (right), potentially useful in some diagnostic tests. 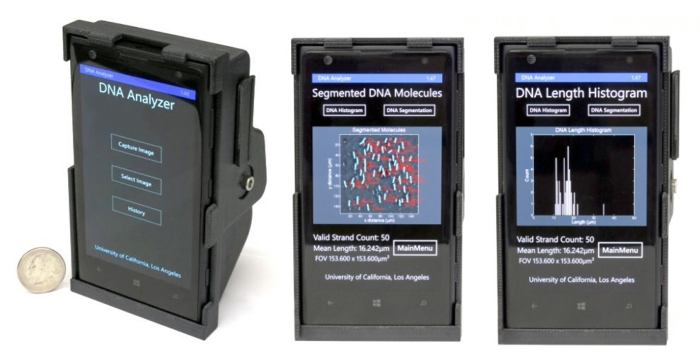 Credit: ACS Nano
A fluorescence microscope attachment on a standard smartphone (left) can image individual DNA strands (middle) and assess the distribution of lengths in a sample (right), potentially useful in some diagnostic tests.

ONE FOR THE ALBUM
[+]Enlarge
Credit: ACS Nano
A simple smartphone attachment (top) uses a blue laser-diode to illuminate coverslips holding DNA samples. The phone’s camera can snap images of single DNA molecules (bottom left) that are surprisingly similar to those from a conventional microscope (bottom right). Scale bars are 10 µm. 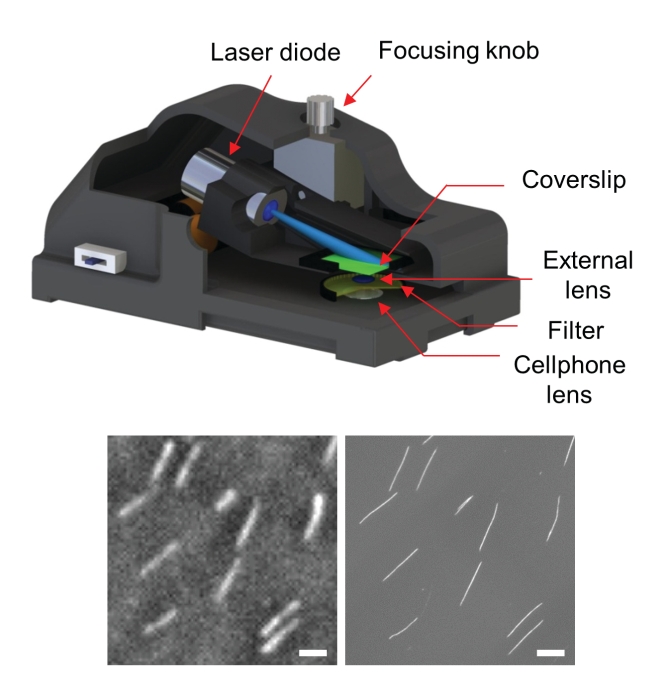 Developed by Aydogan Ozcan and colleagues at the University of California, Los Angeles, the mobile microscopy unit weighs less than 190 g and is powered by three AAA batteries.

Surveying the lengths of DNA strands in a sample can reveal genetic features associated with disease such as copy-number variation, in which a particular section of a genome is deleted or duplicated. Because many people in the developing world own mobile phones, Ozcan hopes that the device could be useful for diagnostic tests in such resource-limited settings.

In proof-of-principle tests, the researchers analyzed a few microliters of a purified solution of DNA labeled with fluorescent dyes. Squeezing the solution between two coverslips stretches the DNA molecules into straight lines.

The fluorescence microscope attachment contains a compact blue laser diode to illuminate hundreds of these strands in the field of view. The smartphone then takes a series of snapshots and sends them to a remote server that runs a program to calculate the strand lengths.

The researchers tested the device on DNA molecules ranging from 5,000 to 48,000 base pairs in length. For strands 10,000 base pairs or longer, the mobile microscope successfully calculated their length within 1,000 base pairs, closely matching results from a conventional bench-top fluorescence microscope costing many thousands of dollars.

Ozcan’s team has already created similar smartphone systems that can measure the concentration of ionic mercury in water or image single virus particles, and the researchers are now developing clinical diagnostic tests using the fluorescence microscope. “Malaria is top of my list,” Ozcan says. Drug-resistant malaria parasites typically have repeating regions in their genomes, and he hopes his device can quickly reveal whether a patient is infected so their drug treatments can be tailored accordingly.