[+]Enlarge
This is the best prospect so far among the newly identified cancer-fighting cyclic peptide mutant-Ras inhibitors. 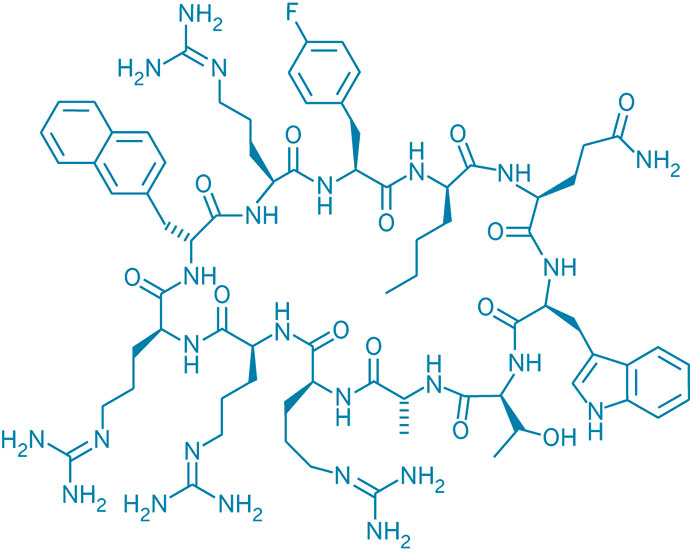 This is the best prospect so far among the newly identified cancer-fighting cyclic peptide mutant-Ras inhibitors.

Mutated Ras signaling proteins, frequently found in human cancer cells, are like airports with hard-to-find runways. They lack prominent binding sites for small molecules, so prospective anticancer drugs don’t land there very often. None has ever been approved commercially, despite decades of effort.

At least 52 mutated, overactive forms of Ras are associated with about 30% of human cancers. Scientists have already identified small druglike molecules that bind Ras mutants weakly. They’ve also singled out some compounds that inhibit Ras mutants indirectly, such as by blocking the mutants from cell membranes, where signaling occurs, or by obstructing signaling partners. But none has survived clinical trials.

Only a few potent and direct Ras inhibitors have been found. Among the best are agents that bond covalently to K-Ras(G12C), a mutated human Ras protein associated with lung cancer. Two teams—one led by Kevan M. Shokat of the University of California, San Francisco, and the other by Nathanael S. Gray of Harvard Medical School—independently discovered covalent inhibitors of K-Ras(G12C) in 2013 (Nature, DOI: 10.1038/nature12796; Angew. Chem. Int. Ed., DOI:10.1002/anie.201307387). Drug candidates based on the inhibitors could move into clinical trials but are likely to inhibit only that single Ras mutant.

By screening a large collection of cyclic peptides, Pei, Briesewitz, and coworkers have now found direct inhibitors for multiple Ras mutants: Some of the peptides kill lung cancer cells with either of two different Ras mutations, some kill pancreatic cancer cells with a third Ras mutation, and others bind to two classes of wild-type (nonmutated) Ras. Ohio State’s Drug Development Institute is collaborating with Evotec, in Hamburg, Germany, to develop the inhibitors.

“We don’t know if inhibition of wild-type Ras in normal cells will be tolerated” in the body, Briesewitz says. “But our compounds are a good start, and we may be able to make them mutation-specific,” thus sparing wild-type Ras protein, which plays an essential role in normal cell signaling processes. “There may also be ways to deliver our Ras inhibitors selectively to cancer cells.”

“The results are promising,” comments Ras specialist Herbert Waldmann of the Max Planck Institute of Molecular Physiology, in Dortmund, Germany. But he notes that what the Ohio State group hasn’t yet addressed and “what will be absolutely required” moving forward is to evaluate the cyclic peptides inside living organisms. Shokat adds that the lack of in vivo data doesn’t concern him yet because “the cellular data are quite impressive.”

Drug Discovery
A small molecule in the gut could explain bariatric surgery’s anti-diabetic effects
Vaccines
What will it take to make an effective vaccine for COVID-19?
Pharmaceuticals
Drug ingredients considered inert might have biological activity
Share X
To send an e-mail to multiple recipients, separate e-mail addresses with a comma, semicolon, or both.
Title: Inhibitors Make Rare Landing On Longstanding Anticancer Target Ras
Author: Stu Borman
Chemical & Engineering News will not share your email address with any other person or company.