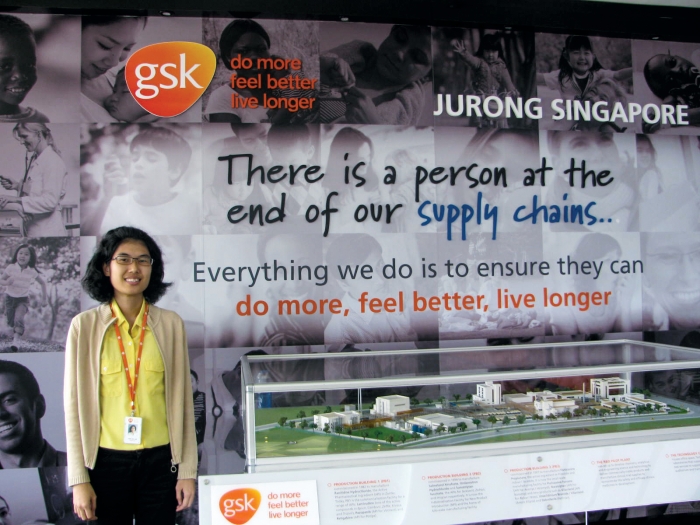 In the U.S., only a few universities call for industrial work experience as part of a science or engineering education. By contrast, universities in Singapore and other countries require science and engineering students to take co-op style extended internships. Blending formal education with months-long periods of full-time industry experience and sharpening students’ real-world skills, these mandatory internships are embraced by students, academic administrators, and employers in Singapore.

Each year, some 250 chemistry and biological chemistry undergraduates and about 200 chemical and biomolecular engineering undergraduates from NTU go through such programs. “The important thing is that the host company treats the student like a real employee, so that they get the genuine experience,” says NTU professor of chemistry Roderick W. Bates.

The National University of Singapore, Singapore’s other major research university, is following suit. It has started requiring internships of up to six months for its chemical engineering students, beginning with those admitted in August 2014, and it plans to extend the scheme to other NUS faculties and schools.

NUS recognizes the importance of equipping graduates with industrial skills beyond what they would learn in academic courses, says Bernard Tan, NUS vice provost for undergraduate education. Many students were already taking voluntary internships, he explains, and the university saw the opportunity to provide structure.

Also in the game are Singapore’s five polytechnics—roughly analogous to U.S. community colleges—which offer a diploma that qualifies graduates to work in a skilled vocational field. They are requiring students to go through a four- to six-month industrial placement to obtain diplomas that would qualify them to work as chemical engineering, pharmaceutical technology, or biotechnology technicians.

Each institution, whether a university or a polytechnic, makes its own arrangements with employers for placing students. Industrial placements can be done at firms such as Shell Eastern Petroleum, ExxonMobil, GSK, and Novartis, which pay students about $350 to $950 a month to cover basic living and transportation costs. Students gain practical industry experience, and some return to the same firms as employees after they graduate.

During the apprenticeship, they typically carry out various tasks in production, engineering, and lab testing, as well as play roles in workplace health and safety and quality assurance.

In the final week of her internship, which ran from May to December 2014, Tan’s training was put to the test when she was posted to another site to help oversee instrument operations. When an instrument malfunctioned, she consulted colleagues and tracked down the equipment vendor to get the problem fixed.

Besides acquiring technical skills, such as testing and validating new software for analytical equipment, Tan says she also learned to handle the fast-paced environment and tight deadlines of an industrial workplace.

From the employers’ perspective, student placements are a key way to recruit. “Such placements ensure that the pool of highly trained technicians, scientists, and engineers necessary to support the growing pharmaceuticals and biologics industry within Singapore continues to grow,” says GSK spokesman Garry Daniels. According to ExxonMobil spokeswoman Karen Wong, the internship is “probably the most powerful and honest” way to evaluate a potential employment, “not just for the employer but also for the participating student.” Internships allow the firm and student to see whether each is the right fit for the other.

Now, some schools are pioneering even longer internships. Nanyang Polytechnic, for example, has started a 37-week internship for students studying process technology and therapeutic proteins and peptides called biologics. The new program has attracted students who want to gain work experience before further studies.

Susan Tan, for instance, has just started an extended internship at pharmaceutical giant Novartis in the site engineering department. The 19-year-old Nanyang Polytechnic student is working on good documentation practices and good manufacturing practices that ensure that production complies with national and international standards. “School gives us an idea of what it may be like in the industry,” she says. “But by working, I get to personally experience the industry for myself and see if it’s suitable for me.” She hopes the experience will give her university application a boost, too.

In the U.S., meanwhile, industrial internships tend to last just one summer, companies say. It’s not clear how many U.S. colleges require internships. However, some 55 U.S. universities and community colleges are members of the World Association for Cooperative Education, or WACE. Cooperative, or co-op, universities, which combine on-campus study with extended full-time work stints, such as Pennsylvania’s Drexel University, do make internships a graduation requirement for some degrees, such as engineering.

Back in Singapore, the government has gotten in on the apprenticeship act, too, seeing the benefits for its workforce. In July 2014, the city-state launched a 21-month training program for biologics manufacturing that comprises a three-month full-time course at Singapore’s Temasek Polytechnic and a nine- to 18-month attachment with companies in the U.S. and Europe.

As Dorothea Klein, chief human resources officer at Lonza, points out: “Ultimately, Singapore as a country gains as it is building an experienced base of employees for Lonza and for other pharmaceutical and biotech companies seeking to manufacture in Singapore.”

Grace Chua is a freelance writer based in Singapore.