The economics of the chemical industry haven’t changed much in the past year, but its structure has

Judging by the data in C&EN’s latest survey of the Top 50 U.S. chemical producers, 2014 wasn’t a bad year by any stretch. But it was a more topsy-turvy period for chemical companies than they have seen in a while. Sales and profits slipped. At the same time, robust deal-making left a mark on the ranking. 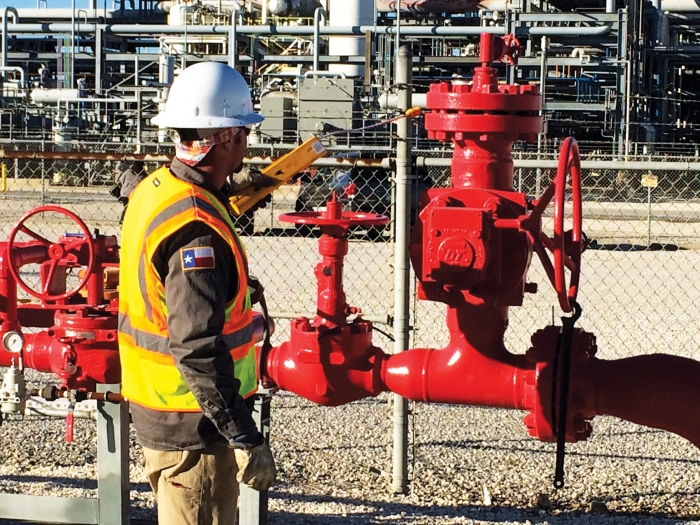 Twenty-one firms posted a decline in sales, although only five saw decreases of more than 10%. Four of the five were involved with mergers and acquisitions (M&A) that reduced revenues.

The 42 firms that report operating profit figures together made $39.4 billion, a 0.5% slip from the previous year. Some 23 companies experienced a decline in profits. Two companies, coal tar chemicals maker Koppers and pigments supplier Ferro, posted slight losses. The operating profit margin for the 42 firms was 14.1%, down slightly from 14.2% in 2013.

Despite the lackluster financial performance, stock prices have held up well. The 31 public chemical firms in the ranking combined for a market capitalization of $369.7 billion at the end of 2014, a 1.9% increase from a year earlier.

But the aggregate number is slightly misleading. An individual investing in a random chemical company on Jan. 1, 2014, would likely have lost money by Dec. 31. Some 22 firms saw stock prices decline. Six of them—Chemtura, FMC, Koppers, Kronos, Olin, and Stepan—saw their market value decline by more than 20%. 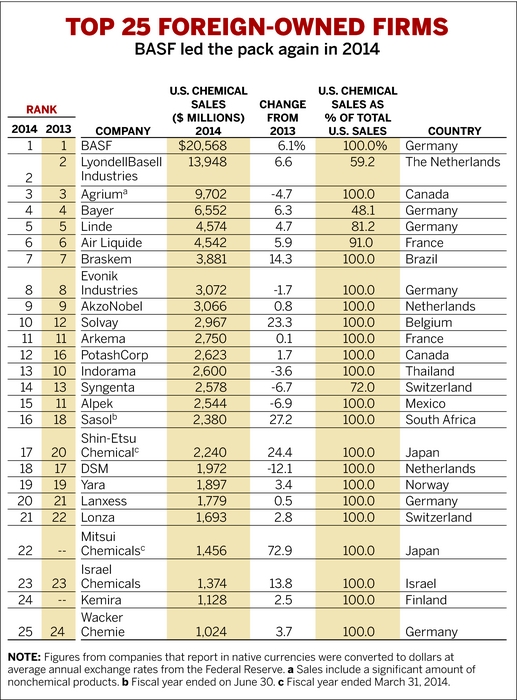 The group’s total market capitalization rose because of the outsized influence of a few larger firms—notably Air Products & Chemicals, DuPont, and PPG Industries—that made up for declines seen at the lower-valued firms near the bottom of the ranking.

Overall, the numbers in the survey reflect a chemical industry that stood its ground in 2014. Cheap natural gas feedstock continues to drive strong profits for chemical makers, and demand for chemical products has been healthy.

But in 2014, the industry started to feel headwinds. Oil prices finished the year at $53 per barrel, half of what they were at their peak last June. By the end of the year, chemical prices had started to fall in kind. Moreover, a strong dollar has weakened the revenues U.S. firms are reporting from their foreign subsidiaries.

And the headwinds aren’t letting up. According to data released late last month by the Bureau of Economic Analysis, U.S. gross domestic product increased at an annual rate of only 0.2% during the first quarter of this year. 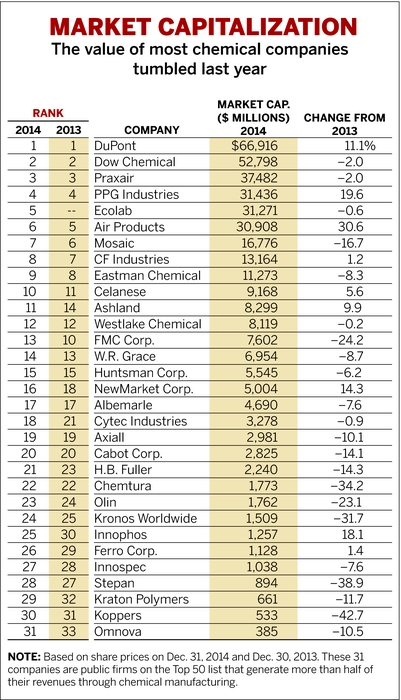 But she sees the economy improving. “If you peel back the onion, there are some real good fundamentals for continued growth,” Moore says. For instance, the underlying demand for cars and houses, which are foundational chemical markets, is strong. Household formation is up. Wages are increasing. And lower prices at the fuel pump are boosting consumers’ discretionary income.

Last year, according to ACC, U.S. chemical output increased 2.0%. For 2015, ACC has forecast a 3.7% increase, though Moore says that number will likely be revised slightly downward when the trade group releases its midyear forecast in June.

Though the performance of the U.S. chemical industry as a whole didn’t change much in 2014, C&EN’s ranking did see movement.

The ranking of the top seven firms, led once again by Dow Chemical, didn’t change. Fertilizer maker Mosaic declined from eighth to 10th. Air Products and Eastman Chemical each moved up a slot to fill the vacuum.

Brisk M&A activity left a mark on this year’s ranking. Ashland declined from 15th to 22nd because it sold its water treatment chemicals business to the private equity firm Clayton, Dubilier & Rice for $1.8 billion.

These firms have been replaced by specialty chemical maker Emerald Performance Materials, 48th, and Minerals Technologies, which makes precipitated calcium carbonate and debuts at number 50. Americas Styrenics joins the list at number 33. The company is a joint venture between Chevron Phillips and Trinseo, which went public last year and is now regularly revealing Americas Styrenics’ sales information.

Telly Zachariades, a partner with The Valence Group, an investment bank that specializes in chemicals, expects the robust pace of M&A activity to continue into this year.

Strong drivers for deal-making persist, Zachariades says. Companies that want to grow are purchasing businesses, and others are still pruning their portfolios of unwanted operations. Financing is available and is relatively cheap. And chief executives who make sensible strategic acquisitions have been rewarded with appreciating stock prices.

Another driver is activist investors. Valence counts 14 firms under pressure from such proactive shareholders, the most famous example being Nelson Peltz’s attempt to thrust four directors onto DuPont’s board. Activist shareholders are believed to have instigated some deals, such as Ashland’s sale of its water treatment chemicals business.

However, Zachariades believes the influence of these investors on M&A can be overstated. “I would probably say no more than 20% of the activity has had activists involved in some way,” he says. “It is certainly a factor in our industry but not the main driver.” By and large, the activists have catalyzed companies to act faster than they otherwise would.

With or without additional M&A, C&EN’s ranking will be different next year because of previous mergers. Merck KGaA is set shortly to complete the purchase of number 35 Sigma-Aldrich. Albemarle completed its purchase of Rockwood Holdings earlier this year. Eastman bought Taminco.

Newcomers will emerge as well. DuPont is set to spin off its performance chemicals business as Chemours later this year, creating a large new company that will no doubt debut near the top of next year’s ranking.

For an interactive look at the Top 50 U.S. chemical firms visit http://cenm.ag/top50us2015